Of all the myriad, insidious impact of climate change, its corrosive effect on culture has received comparatively little attention.

But for the 1200 people living on the tiny, remote pacific island nation of Tokelau and the 10,000 or so Tokelauans in New Zealand and Australia, the climate crisis threatens not only their physical home but the very survival of their culture.

Te Molimau is a new production by Tokelauan-Samoan writer and actor Taofia Pelesasa. It is set in the year 2060, by which time it is estimated low-lying Tokelau will have disappeared entirely. 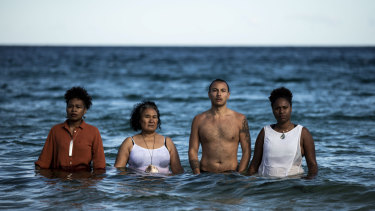 The play looks at the last hour of the nation through the eyes of the one remaining resident, a young woman called Vitolina.

"It imagines what it might look like for us Tokelauans to watch our island disappear because the rest of the world didn’t take action," says director Emele Ugavule.

As storms have worsened and seawater has encroached ever further onto the three atolls that make up Tokelau, residents have left in even greater numbers.

It imagines what it might look like for us Tokelauans to watch our island disappear because the rest of the world didn’t take action.

Many have settled in New Zealand, where they have citizenship, while a significant proportion has moved to live around New South Wales' Mt Druitt area.

"That impacts our language and our culture," she says. "The current estimate is that only 30 per cent of Tokelauans living outside Tokelau speak our language fluently.

"Our understanding of how to care for the land and the ocean is embedded in our language.

"And our cultural practices like singing and dancing are embedded in our everyday life in the islands – how do we maintain that in a context where we have to make money to survive rather than grow fish or food to surive?"

Ugavule says the play is an important milsetone for her country.

"It’s a really big deal for us," she says. "We don’t know of any other work that has been about Tokelau ever."

And it is being staged at a particularly opportune time as leaders, including Prime Minister Scott Morrison, gather this week for the Pacific Islands Forum in Tuvalu, where climate change will once again be top of the agenda.

Ugavule hopes the play will encourage empathy among the audience and maybe inspire some to take action.

Te Molimau is Downstairs at Belvoir Theatre until August 24