A faulty underground cable was behind the Gabba being plunged into darkness during a Big Bash clash on Thursday, saving the Brisbane Heat from likely defeat at the hands of the Sydney Thunder.

Power at the stadium was out for about an hour but another 80 minutes passed before electricity was restored for the remaining 45 buildings in Woolloongabba and East Brisbane affected by the outage, according to Energex. 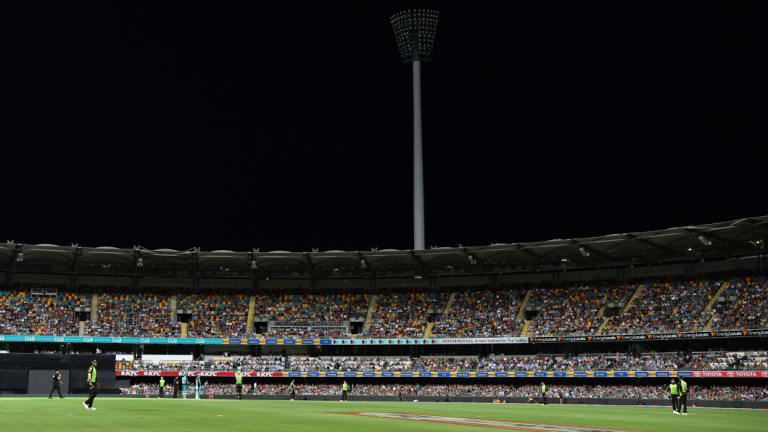 The lights on the grandstand at the Stanley Street end of the Gabba were out on Thursday night.Credit:Darren England – AAP

Needing 187 for victory after a historic Shane Watson century, the Heat were 2-10 in the third over of their innings when the power cut struck and the match was eventually abandoned.

Fans were left to amuse themselves, even jokingly turning on their phones' torch lights in an effort to get play back under way.

An Energex spokesman said the blackout started at 8.13pm, with a fault occurring in the network underneath Stanley Street. 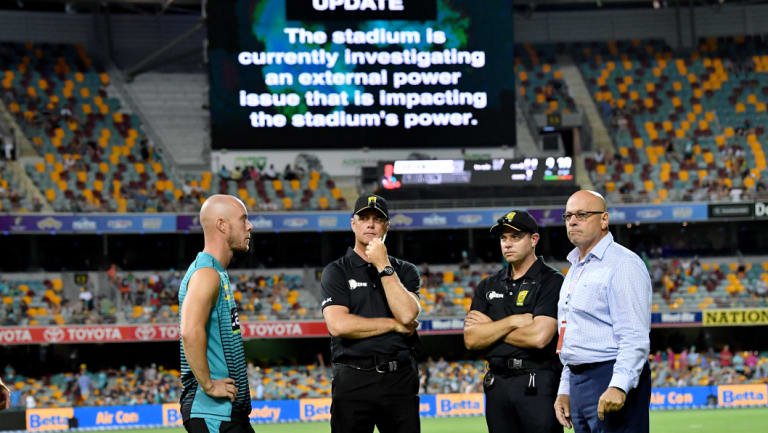 Chris Lynn (left) of the Heat is seen talking to the match officials after play was abandoned.Credit:Darren England – AAP

Power at the Gabba was restored at 9.16pm.

However, the fix is only temporary.

"The Woolloongabba network is fed from two different areas … so we can reroute power from other parts of the network," the Energex spokesman said.

"So we rerouted the power back to Gabba … because the priority was to get the Gabba back up.

"Crews are going down today to identify exactly what occurred, but it is not a common issue to have underground cable faults.

"We're going to dig up outside the Gabba on Stanley Street because while underground faults are much rarer, unfortunately when they do occur, they are much harder to identify and repair."

Frustrated Sydney Thunder coach Shane Bond took aim at the umpires for leaving the final call on whether play should have proceeded to the Brisbane Heat.

Heat danger men Chris Lynn and Brendon McCullum had been dismissed and Bond said the Thunder approached officials about bowling their spinners so none of the remaining batsmen were in danger.

Bond said there was more than enough light, and he had played at grounds back home in New Zealand and in the Caribbean Premier League that were much worse.

However, he did concede that if he was in the same boat as Daniel Vettori, the Heat coach and his former New Zealand teammate, he would have also passed on the chance to continue playing.

Had the Heat faced two more overs, there could have been an official result.