How we learnt to laugh at the cancer that forged our friendship: The inspiring trio behind M&S’s latest campaign revealed…

Curled up on the sofa, her baby daughter sleeping in her lap, Vicky Ideson spoke with brutal honesty into her mobile phone’s camera.

‘I’m so scared I won’t get to see this little girl grow up,’ she said, voice shaking. ‘I’ve lost my hair, my breast and I could end up losing my life to this disease. Today is a bad day.’

Without watching the 30-second recording, Vicky, a 39-year-old GP practice assistant, immediately uploaded it to Instagram. Since being diagnosed with breast cancer months earlier, in September 2017, making a video diary had become part of her daily routine. 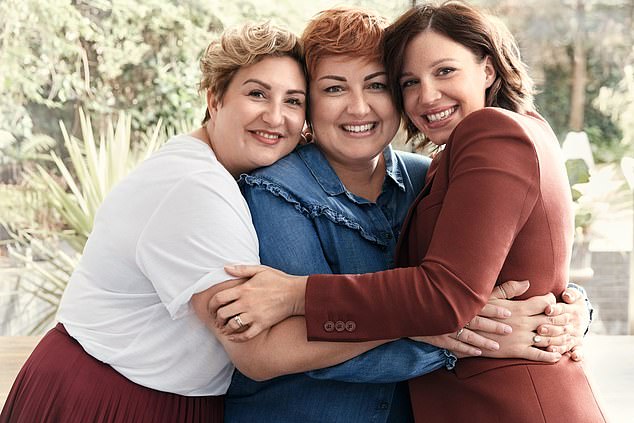 Vicky Ideson (right), 39, has been dealing with her breast cancer by uploading daily vlogs to help her offload the ‘negative stuff’. Unknown to her two other sufferers were watching (Left, Sophie Busson, 33, from South Wales and, centre, Lisa Jackson, 38, in Middlesbrough) 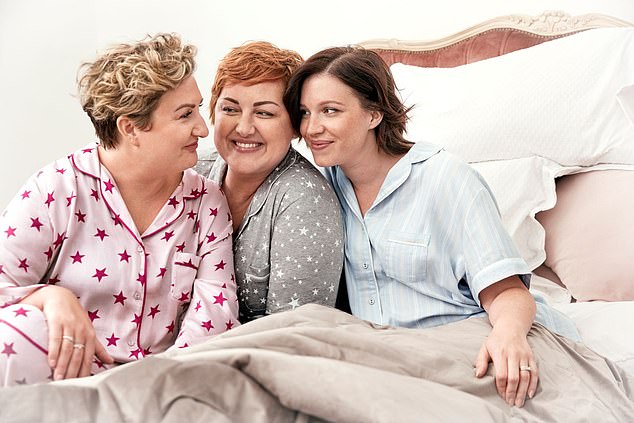 The three women, which became friends and helped each other through their treatments, all met for the first time the other day after being in daily contact

An outlet for the bleak feelings she didn’t want to share with family and friends, it didn’t occur to Vicky that these videos would be of interest to anyone else. ‘I just found making them and sending them out into the ether cathartic,’ she explains. ‘I thought I was talking to myself. But that was OK with me.’

With her husband, family and friends, this young mother was putting on a great show of stoicism: nodding, smiling and making all the right noises when the people who loved her promised she would survive her very frightening stage 3 breast cancer diagnosis.

‘Inside it was hard to believe everything was going to be all right,’ she admits. ‘It was difficult coping with the inevitable dark thoughts — feelings I just didn’t seem able to share with my loved ones.

‘I know it would have scared and upset them to hear that, actually, I was terrified of dying. I’d have seen all that emotion written on their faces; I’d have had to deal with the guilt of that, on top of everything else I was going through.’

Vicky — who lives in North Yorkshire with husband, Mark, 47, a driving instructor, and their children Elliot, 12, and three-year-old Hattie — says she couldn’t do that to them or to herself. 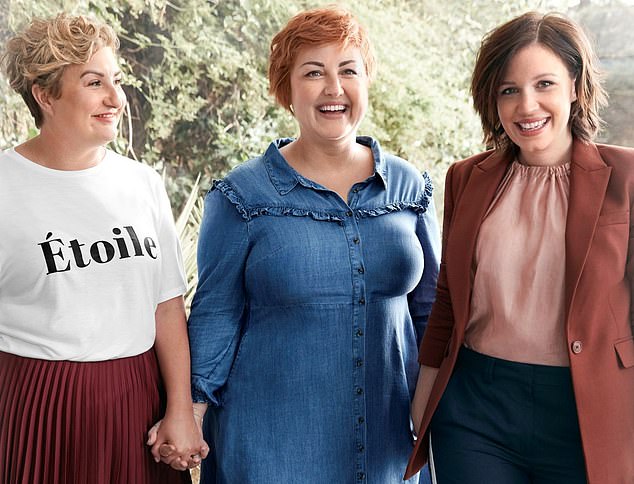 Vicky’s story was watched by Sophie Busson, 33, at home in Newport, South Wales, and Lisa Jackson, 38, in Middlesbrough. When Vicky noticed they knew each other she brought the trio together so that they could share their struggle with cancer

So she made her recordings and posted them online. ‘They became a way to get the negative stuff out of me, so I could be stronger in real life,’ she explains.

But while Vicky thought no one was watching, two other women were hanging on her every word: Sophie Busson, 33, at home in Newport, South Wales, and Lisa Jackson, 38, in Middlesbrough.

The trio had much in common — similarly aged, with a husband and two young children each at home, all three had been diagnosed with breast cancer at around the same time.

Sophie and Lisa had already connected online, having searched social media sites looking for women who might share their experiences. Unknown to each other, they also both began sending supportive messages to Vicky. ‘One day I noticed that they were Facebook friends with each other,’ says Vicky. ‘Having made the connection, we started a private group chat where the three of us could talk. It became a lifeline.’

In January last year, they began sharing the good, bad and the ugly moments of mastectomies, chemotherapy and radiotherapy, forming a deep bond — despite never having met in real life. 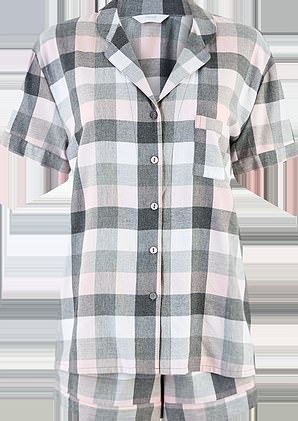 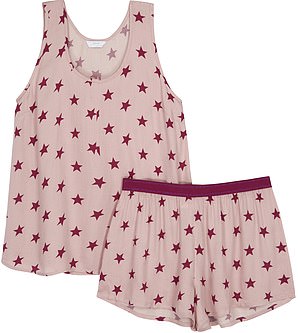 Until, that is, this summer. In July the three women were finally brought together for a photoshoot that this month sees their friendship portrayed on billboards in M&S stores across the country.

They are the faces of M&S’s Breast Cancer Awareness Month campaign for 2019. ‘Finally meeting each other was incredible,’ says Lisa, a nurse who lives with husband Scott, a drug and alcohol liaison worker, and their daughters Rosie, nine, and Erin, seven. ‘I was diagnosed in October 2017 after I found a large lump in my left breast. Until then I’d used social media to share slimming recipes and tips. Immediately, my feeds went from being pictures of food to posts from women who had breast cancer too.’

Lisa says when she stumbled across Vicky’s vlogs, she felt she was hearing her thoughts falling from another woman’s lips. ‘Everything she said I could relate to,’ she says. ‘It was comforting. I used to look forward to each post.’

The three women have messaged every day for the best part of two years, and have tried many times to meet up. ‘But,’ says Lisa, ‘juggling work, family and our treatments made that impossible.

‘Finally getting to hug them both — these women I’d bared my soul with — felt like being with family. Normally I’m very good at controlling my emotions, but that physical connection felt so good I couldn’t help crying.’

Sophie, an insurance claims handler married to Gareth, a 35-year-old bank worker, felt the same. Mum to 14-year-old Leo and Reggie, six, she adds that while their subject matter is often dark, humour and positivity are hallmarks of the trio’s conversations. 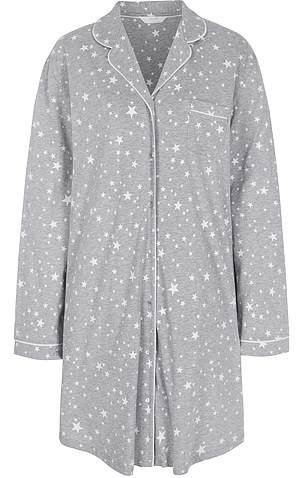 ‘The cancer was in my left breast, and I went on to have my right breast removed prophylactically,’ she explains. ‘I had reconstructive surgery, which was supposed to give me my boobs back — I really missed them.

‘But it failed. The blood vessels didn’t connect with my new breasts and I had to have them taken off a couple of days later, which was devastating.’

Even at that wretched juncture, Sophie’s breast cancer pals made her laugh. ‘They sent me a card with a pair of breasts on the front, with crosses where Lisa had drawn over them and written “who needs two boobs?”

‘It was so irreverent in that situation. No one else close to me would have felt it was appropriate to send something like that. Seeing that card and having a laugh was just what I needed.’

Meanwhile, as well as sharing their deepest fears and physical as well as emotional pain, there were other things it helped to talk about.

‘When you’re fighting cancer it’s almost embarrassing to admit you’re upset about losing your hair or not being able to wear a low-cut dress because you’ve only got one breast,’ says Sophie.

‘If you complain about how awful you look, the people who love you say that you’re still beautiful, and they mean well.

‘But I wanted to wail that I hate being bald, and instead of getting platitudes know that I’d get a reply back from Vicky saying, “I know how you feel — I look like a potato too!” At one low point I even typed, “sod being alive, I miss my hair” — without anybody being shocked by what I’d said.’

All three are now in remission. But that doesn’t mean their friendship has been relegated to the past. ‘Being cancer-free is actually difficult too,’ says Sophie. ‘The girls get that in a way only someone who’s been through this can. Cancer changes you. It makes you fearful, because you know bad things really can happen to you.

‘But it also makes you incredibly grateful for another chance to watch your children grow up, your parents grow old and to spend many more years with the husband you love.

‘These thoughts aren’t ones you necessarily want to share with family. But with the girls, I can say anything — and that will continue, I think, for the rest of our lives.’

Vicky adds: ‘When we met, our idea of who we were had been stripped away by cancer diagnosis. That turned us into three new people. It would have been very easy to struggle with a strong sense of “why me?” But the fact we were all the same age, had two kids, the same type of cancer and were undergoing identical treatments helped us to think “why not me?” and get on with it.

‘I’m so grateful to have these two women alongside me, able to reach out through cyberspace and hold my hand through the hardest experience of my life.’