The Louisiana coastline devastated by Hurricane Laura has started a long and gloomy recovery as hundreds of thousands of people still without water and power confront the possibility that basic services may not return for weeks – or longer. More than 400,000 power outages were reported across the state as of early Saturday morning, according to poweroutage.us, which tracks utility reports.

On Friday, the U.S. death toll from Laura more than doubled to at least 14. At least 10 people died in Louisiana and at least four died in Texas, most by trees falling on homes or by carbon monoxide poisoning from generators.

The scope of the destruction is overwhelming. Louisiana Governor John Bel Edwards said in a tweet late Friday the devastation and damage stretch from southwest Louisiana through the northern part of the state.

His office said President Trump approved his request for a major disaster declaration, which will pave the way for getting aid to hard-hit individuals and communities. 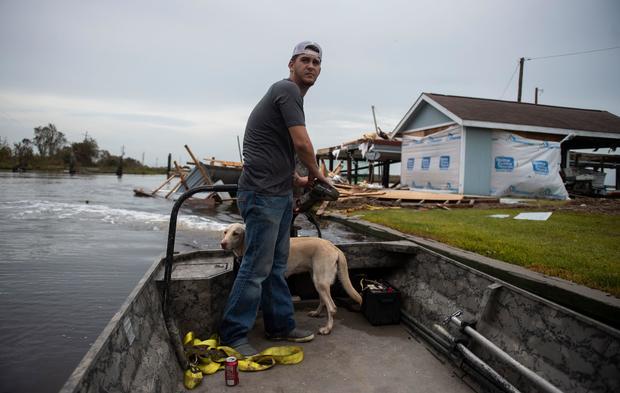 In the meantime, the lack of essential resources was grim for the many evacuated residents eager to return. The Louisiana Department of Health estimated Friday that more than 200,000 people were without water. Restoration of those services could take weeks or months, and full rebuilding could take years.

Thousands of people who heeded dire warnings and fled the Gulf Coast returned to homes without roofs and roads littered with debris. Lawrence “Lee” Faulk came back to a home with no roof in hard-hit Cameron Parish, which was littered with downed power lines. His metal storage building, 24 feet square, was thrown into a neighbor’s oak trees.

“We need help,” Faulk said. “We need ice, water, blue tarps – everything that you would associate with the storm, we need it. Like two hours ago.” 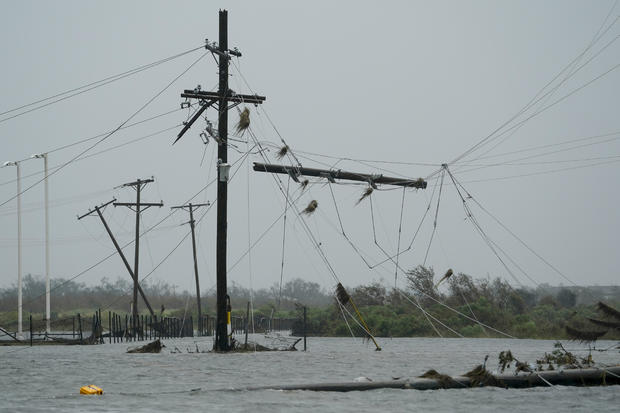 The White House said President Donald Trump would visit the region Saturday and survey the damage.

One of the hardest hit areas was Lake Charles, Louisiana, a city of 80,000 residents. Simply driving there was a feat. Power lines and trees blocked paths or created one-lane roads that drivers had to navigate with oncoming traffic. Street signs were snapped off their perches or dangled, and no stoplights worked, making it a trust exercise with those sharing the roads.

Mayor Nic Hunter cautioned that there was no timetable for restoring electricity and that water-treatment plants “took a beating,” resulting in barely a trickle of water coming out of most faucets. “If you come back to Lake Charles to stay, make sure you understand the above reality and are prepared to live in it for many days, probably weeks,” Hunter wrote on Facebook.

Caravans of utility trucks were met Friday by thunderstorms in the sizzling heat, complicating recovery efforts.

Forty nursing homes were also relying on generators, and assessments were underway to determine if more than 860 residents in 11 facilities that had been evacuated could return.