Just a few minutes into the movie Crazy Rich Asians, the guy sitting next to me in the cinema started making this weird “HHHHH HHHHH” noise.

He seemed to be choking on something – maybe food, or a small part of a toy not suitable for children under three. So I did what anyone would do: I just ignored it and waited until he started feeling better or he died. But he didn’t do either of those things – he kept HHHHing and HHHHHing. Then I realised … he was … laughing. He was laughing at this movie. Which didn’t make sense to me: it was an extremely unfunny, unromantic unrom-noncom with no laughy bits in it. 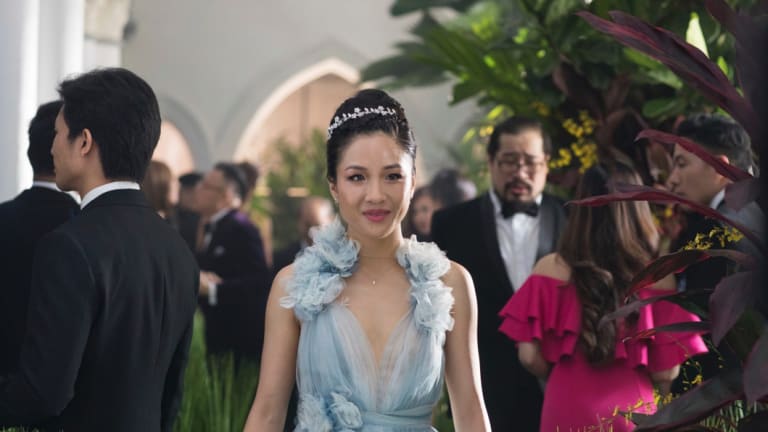 So I gave him a sideward glance, as if to say: “Uhh, excuse me, but do you really find this film funny? It’s just a dull, vacuous soapie that seems to be making some kind of point about the rise of Asia as the dominant global economic powerhouse of the 21st century, but the message is murky. Verrrrry murky.” It was a long sideward glance. I had to throw in a little after-shoulder-shrug so he’d know I was done.

He immediately sideward-glanced right back at me, as if to say: “Are you kidding, mate? This film is hilarious! It’s clever and well paced and certified fresh on Rotten Tomatoes – it’s got an approval rating of 93 per cent on the Tomatometer! Maybe you’re the one with no sense of humour, hmmm?” Which was a bit of a bitchy sideward glance. I was way more glance-polite.

That’s when I noticed other people in the cinema were making “HHHHH HHHH” noises too; all of them laughing or choking on small parts of toys. I squirmed in my seat really loudly, as if to say: “Oh come on, people! I can’t believe you’re all enjoying this! I mean, sure it’s great to have a mainstream studio film with an all-Asian cast, but the acting is clunky, the characters are cliches, the plot is derivative …”

But I never got to finish my ranty seat squirm because I was rudely interrupted by a woman sitting on the other side of me. She slightly readjusted her elbow on the armrest, as if to say: “Keep still, squirmer. We’re all trying to watch this delightfully engaging romp!” And a couple in front twitched their heads, as if to say: “Yeah, the whole world’s gone crazy for Crazy Rich Asians! It’s a box office triumph!” And a guy behind me softly crinkled his chip packet, as if to say: “Sorry to say it buddy, but you’re completely out of touch with popular culture!”

Everyone was ganging up on me. Things got nasty fast.

So I slumped down in my seat, as if to sarcastically mumble: “Sorrr-ryyyyyy.” Then I sat in silence, pondering whether what they said was true. Maybe I am out of touch with popular culture. I don’t seem to get all kinds of things that everyone else seems to get. I don’t get this movie. I don’t get Instagram. I don’t get soccer and tattoos and Miranda Kerr’s head. I don’t get those Ottolenghi salads with kohlrabi and kaffir and kalettes. I don’t get that ridiculous over-manicured Drake-beard fashion that looks like it’s been drawn on with a Sharpie and masking tape.

And I would have kept pondering, but the guy behind me crinkled his chip packet quite aggressively, as if to say: “We can still hear you! Just shut up!” So I gave in and watched the movie. Twenty minutes done; 101 minutes to go.

Danny Katz is an Age columnist.