In 2015, I decided to embark on the adventure of moving abroad. I bought a one-way ticket to Cairo, Egypt, and had a goal of ending my 20s with a bang. I guess it wasn’t enough that I just picked up and left every bit of familiarity and comfort to live on the whole other side of the world, I also decided to push my body to its limits while living in a new country because, why not?

I began to Google search activities that were offered in the area that I lived because with a population of over 20 million people, Cairo is pretty widespread. Doing something out-of-the-box was a challenge I initially thought I was ready for. Soon enough, I came across some options for learning how to scuba dive and thought it would be pretty cool to try.

When I chose this newfound activity, I had no idea how much of a time commitment it really was. Looking at people scuba diving on vacation is much different than actually getting a Professional Association of Diving Instructors (PADI) Open-Water certification. Let’s just say I didn’t sign up for the quick instruction, limited-time vacay dive adventure. 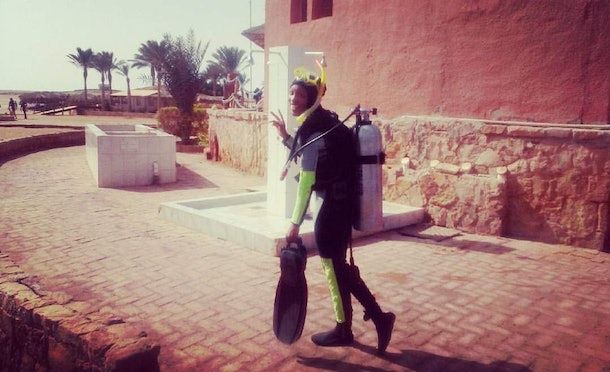 There was so much that made me nervous about going all in with scuba diving, and one in particular was that there were no refunds — meaning no turning back. When I entered the center, I was greeted by the owner, a Master Diver by the name of Magdy. The walls were decorated with equipment I had never seen up close, and pictures that showed divers that came from all over the world to dive at some of the most picturesque spots in Egypt.

Meeting my classmates exacerbated my nerves even further. We were a mixing bowl of students ranging from Australian and British to American and Canadian, and we were all living in Cairo. The biggest difference between us was that all of my classmates had swimming experience, and basically presented as human fish; I was more like the fish out of water. After I heard about all their experience in the water, I could only think about how much I wanted to run right out of there with my flippers in tow.

Thankfully, the instruction didn’t begin in the water, so I had some time to hide my unpreparedness for a few more days. There’s intense, by-the-book instruction that includes all of the information from A to Z on scuba diving. We had to learn about the equipment, sign language for certain fish, mathematical sequences, and breathing techniques so that your chest doesn’t explode when ascending too fast. Yeah… I was still waiting for the fun part to begin! After each chapter, we had to take a test which required a certain score to proceed into the next section. After the first day, I felt pretty comfortable having learned the practical side of what the certification entailed. That is, until we made it to the water portion of the show. 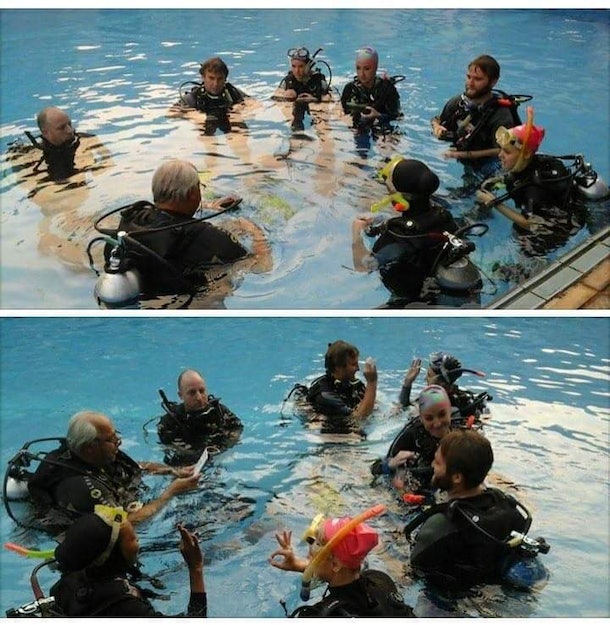 In my Google search, I must’ve missed the part that states that before you can make it to diving in an actual large body of water, there’s a pool practicum — and if you fail, you cannot go further in the course. It is required to do a 200 meter nonstop swim without touching the sides or bottom of the pool, as well as a 10-minute float with the same restrictions. As an American, I’m not well-versed in the metric system but I knew 200 meters was not going to be anything short distanced. When I found that this was equivalent to four laps in an Olympic-sized pool, I panicked.

The most confident part of me knew that I could make it about two laps, but then what? Was everyone going to laugh at me? Had I just willingly spent my money to fail this course? Was it worth it? As everyone began to get in the water, I knew this was it. I felt like it was all over. I couldn’t even think of the last physical activity I had really done aside, from trying to cross the street safely. And trust me, crossing the street in Egypt is like being in a real-life video game with no road rules, street lights, or speed limits.

As I began the best breaststroke I could conjure, I saw my classmates cut through the water like sharks — effortless. I tried to keep myself focused on breathing and not stopping. I positioned myself closer to the innermost part of the pool where the instructor could not fully see me — or so I thought. After the first lap, I was winded and knew it would be downhill from there.

My legs and arms were on fire by my second lap, and as my head rose above water I could see my classmates getting out of the pool one by one. I was embarrassed at the idea that all eyes would be on me. They finished four laps and a 10-minute float somewhere in the middle of my second or third lap. I was losing air and momentum.

At some point, I decided that I would just sink until my feet hit the bottom of the pool and call it a day. But, just as I pushed the last bit of energy I had, I was on lap four. I wasn’t sure how I’d get by with the float because my limbs had turned into al dente spaghetti. The afternoon was progressing, and I felt as though I was holding everyone up. I floated on my back looking up at the sky and saying every prayer that I knew until I could see my classmates flailing their arms and calling my name in the distance.

I knew I was dead. I thought they were greeting me at the pearly gates and somehow I was on the way to meet my maker. But, it was actually the end of my float. I actually survived, which completed the first part of the pool experience. The next part was two hours of underwater exercises involving safety and partner work.

We had to learn how to properly put on the equipment and before descending back into the pool went over more sign languages that were set in place to save our lives. As we continued going over certain procedures, my body felt like I had literally been punched by the whole class because I was beyond sore.

The next day, my head felt as though it was going to explode. I called out of work and walked to the nearest pharmacy where I could find some type of ibuprofen to help the pounding. Scuba Diving International refers to this as a "diving headache" which can also be a result of DCS or decompression sickness. When I called the Divers Alert Network, a medical information specialist by the name of Travis Ward, informed me that what I had experienced was neither of the two. He said it sounded more like sinus barotrauma or a sinus squeeze, which happens to a lot of first-time divers. The cause is the fluctuation in pressure the nasal passage experiences as a result of ascending too quickly or having to equalize pressure by holding your nose and blowing– similar to taking off and landing on a plane. I couldn’t believe I had taken my body through all of this just for this certification. But, what I came to the realization of was that it was less about just getting certified and more about growth.

I learned that fear was never going to be a deterrent in my life thereafter or stop me from trying new things even as a novice. I completed all of my dives at a PADI dive center in a beachy area of Egypt called Sharm El Naga. We had to complete five separate dives over the span of two days that required us to do specific tasks during each to show that we knew what we were doing including identifying fish and plant life, properly ascending and descending, and identifying the components of our equipment. As my instructor went to sign my paperwork, at the commencement of the dives he turned to me and said, “I’m extremely proud of you! At the beginning you did not look like you were going to make it.” We both laughed.

Three months later, I signed up again to receive my Advanced Open-Water certification where I pulled a muscle somewhere in between my third or fourth dive and did not think I’d finish. I thought of all the time, money, and obstacles I faced completing my first certification and decided to just push through the threshold of pain because in the water it wasn’t exacerbated. I completed that course as well but ironically have not been diving ever since. I think a part of me wanted the taste of adventure and since experiencing it, decided that was more than enough for me.