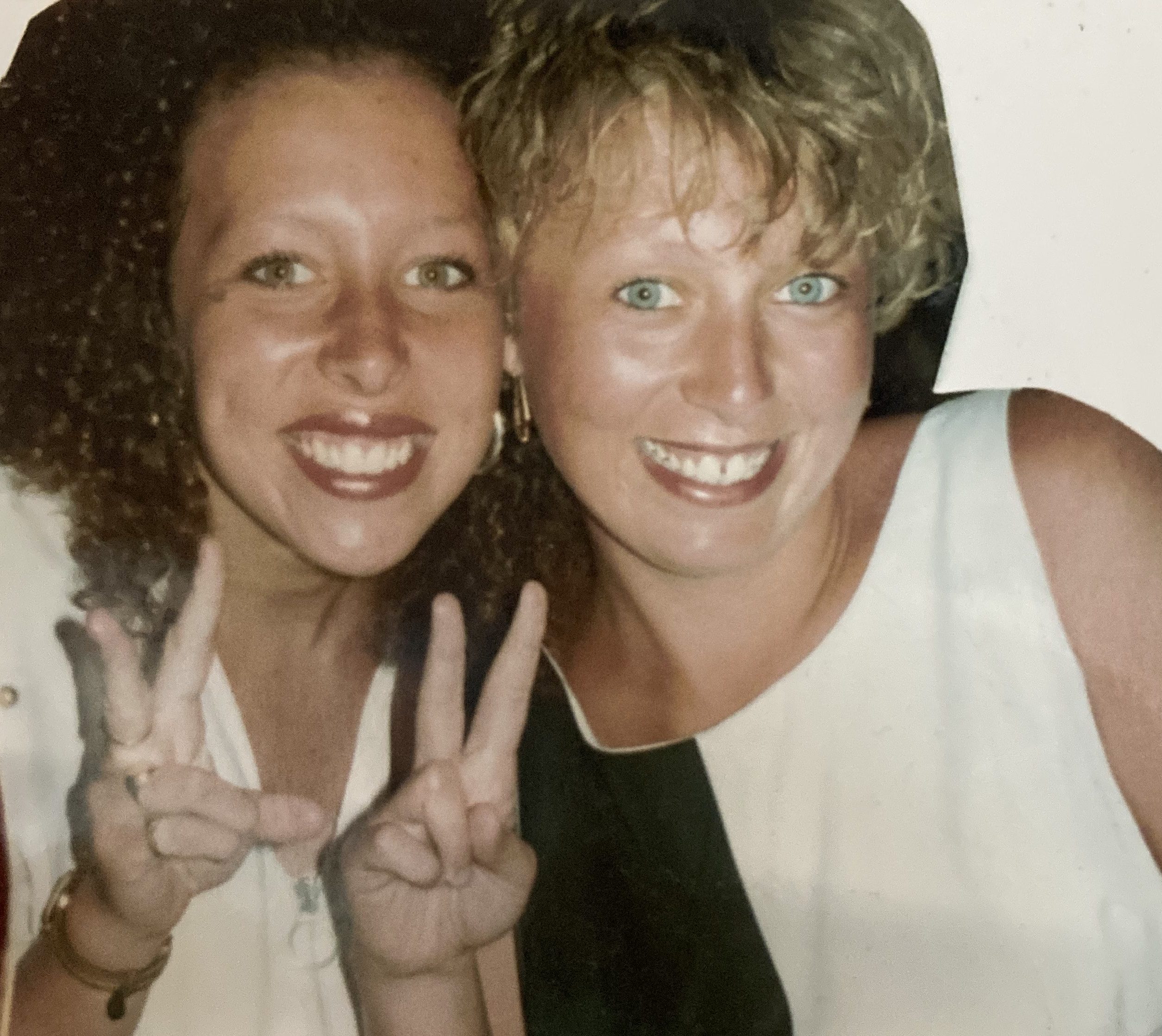 It’s been over 20 years and one memory of my late sister Claire remains embalmed in my mind.

It was a month before she jetted off to her backpacking adventure in Australia, in October 1999.

Claire, 23, had been playing hide’n’seek with my son Josh, then two. My daughter, Dominique, then five, was at primary school.

I was pregnant – expecting my third baby the following March – resting my swollen feet under a den of sticks Josh had built, Claire opened up some soft drinks for us.

‘I’m so excited Karen’, she said, clinking my can.

‘Cheers to the land of Aus,’ I smiled, fighting back a tear. She sensed my sadness and gave me a huge hug.

‘We will always be connected, like Yin and Yang,’ she smiled.

I tried to soak up every second with her before she departed that November from Heathrow airport.

The separation was brutal as well as the change. We’d never been apart.

Throughout our childhood, I’d mothered Claire. I was only five years older but instinctively felt I had to protect her.

I taught her to swim and read. As she grew older, she told me her secrets such as boys she fancied and when she’d first sneakily glugged alcohol with her pals.

We felt as one soul. Claire was the ‘peacemaker’. Gentle, full of positivity – she lit up the room with her smile.

While she was away, I was worried about where she was, who with, and if she had enough money.

But Claire did communicate. I would come home delighted to find a postcard every so often: ‘Met some fit Italian blokes in the sea on Bondi Beach’. She would call extremely early or late! I went to an internet café to send her emails.

That Christmas, she sent me a precious parcel of shells she collected and gifts for Dominique and Josh.

My son Harry was born 10March, 2000. I missed Claire and wished I could place Harry in her arms.

‘At least she’ll be back in April,’ I sighed, longingly.

Next day, she called, loving being ‘Auntie Claire’ again. It felt like a shot of golden love hearing her voice. ‘Congratulations! Send me a photo of Harry and I’ll put him in my pocket.’

Then, she revealed that she’d decided to stay a bit longer. Her words hit me like a bulldozer but I wanted her to fulfil her dreams while travelling.

Months passed, family life consumed every minute, but in mid-June I was suddenly possessed with a terrible sadness and fear. Floods of intense tears hit me as I was overcome with the feeling Claire was in danger.

‘It felt like a warning about you,’ I said, urging her to be extra safe. She told me she missed me, that she was with two other girls she’d met and was fine.

‘Love you, bye!’ she chirped, hanging up.

It was the last time we ever spoke.

Then horror struck me. ‘Childers Palace’ hostel was where Claire said she was staying.

I clutched Harry, then three months old. I rocked him, to and fro.

‘Is she alive, injured or… worse?’, I panicked.

Next thing, my mum arrived at my house. ‘My baby!’ Mum shouted, emitting a primal noise, then she collapsed.

But no-one knew for sure what had happened. I took Mum home to Dad and found myself in Claire’s bedroom.

Scanning her walls of quirky Purple Ronnie postcards, and the words ‘S**T HAPPENS’. I stuffed her Alanis Morissette CD under my top so I could feel closer to her.

I opened her wardrobe and fell into it, inhaling every molecule.

Five days on, we received the dreaded news: Claire was confirmed one of the 15 dead.

It would later transpire that a man called Robert Paul Long was kicked out of the popular Childers Palace Backpackers Hostel because of payment arrears. A day later, just after midnight on the 23rd June 2000, with over 80 backpackers asleep inside, he deliberately set the hostel building on fire and fled the scene.

My head was foggy. I tried to hide my grief from my children, keeping their routine as best I could.

A week later, my mum, dad and eldest sister flew to Australia. Leaving my kids tore me apart but I had to go. I’d convinced myself Claire was still alive.

I ran into the tarred hostel. I stood scanning the melted furniture. Finding the stairs, I tried to run up, shouting ‘CLAIRE, CLAIRE!’. A policeman restrained me. There was no longer an upper floor.

She really was gone.

Desperate for answers, we dealt with officials at Queensland Police and the Foreign Office, but nothing gave us any comfort.

A week later, we returned home, broken, without Claire. We had to wait six weeks for forensics to release the bodies. Along with seven other British families who’d had loved ones taken in the arson attack, we gathered at Heathrow airport in the cargo area.

The coffins were covered in wilted flowers. Anger swept through me, I remember screaming, wanting to rip the lid off Claire’s – then passing out.

We held Claire’s funeral at St Michael’s Church, Ascot, with hundreds in attendance to mourn our loss.

Watching the devastation and impact on my parents haunts me today. They were suicidal. They found strength with the other victims’ families. My dad sadly died of lung cancer last year. My mum is still here, still suffering with the grief. It will never leave her.

In 2001, at Brisbane Courts of Law, Long went on trial. We didn’t attend as we knew there would be no justice for Claire.

Long was only charged and convicted for the murder of Australian twins Kelly and Stacey Slarke. He was sentenced to life in prison with a minimum of 20 years without parole.

Earlier this year, Long was up for parole but it was denied – he can try again after 12 months. I find it extremely difficult to even think about that evil creature but I did sign the online petition to keep him behind bars for life started by Dutch survivor of the blaze, Rob Jansen.

My little sister was only 23 when she was killed. So much promise – wasted.

Part of me died when Claire did. I saw her everywhere, and had no respite at night. I’d dream of her on a dazzling white sandy beach, wearing khaki shorts and a white t-shirt, then she’d hug me. Ecstasy. Then I wake to the harsh truth – she’s never coming back.

For years I felt I had to protect my children from the sinister new world I found myself in.

In 2004, my daughter Rebecca was born which gave me renewed hope – a new life to cherish.

I remained in my own ‘bubble’ as a mum to my kids, I couldn’t tolerate other people. Our favourite thing was being outside in nature. I built a fantasy world through my children filled with fairy houses and pirate ships – we’d read Peter Pan or Winne The Pooh together. It made me feel safe.

Then, in the evenings, once kids were in bed I drank red wine and blasted out Alanis Morissette to feel close to Claire.

Anniversaries are the most painful – and Claire is missing from every celebration we have. I still sing happy birthday through tears.

As my kids grew older, I was overprotective. I panicked and worried increasingly. On any trips they had to be near a fire exit.

I am suspicious of other people, I’ll never trust anyone as I’ve lost faith in the human race. Nature and creativity is my calm.

My children are now grown and independent – Dominique’s 26, Josh is 23, Harry’s 21 and Rebecca’s 17. I have a granddaughter now too, just nine months old.

While I am scared for my children, I really want them to carry on their adventures in life, in Claire’s name. I admit, I’m petrified to let them travel but Harry’s best friend has announced he’s emigrating to Australia.

Harry’s been invited to stay. I have had to give him my blessing – and a St Christopher medal for protection – but I’ve told him never to stay in hostels.

In Claire’s own words, I have advised: ‘The world is your playground – go make epic memories.’

If anyone else out there is grieving, let me tell you this – you are brave enough to do so.

It’s National Grief Awareness Week from 2 – 7 December and I want to stress to anyone who is struggling that grief is personal – and it never just goes. Reach out to other victims for support – my family found immense strength and hope through the families who have also lost loved ones.

I see Claire in all my children. Dominique has her ebony curls and grace, Josh has her mischievous streak and bravery while Harry is laid back and left-handed like she was, and Rebecca is a peacemaker.

I often think about what Claire would have become – she had wanted five kids, and I know she would have made a wonderful mum planning games and music for us all at family get-togethers.

She loved Christmas so there would be piles of presents and an abundance of laughter.

Although Claire’s not here, the memories we make are kept in all our hearts with Claire. Always.