A bride-to-be was slammed online after complaining that her maid of honour would not spend the day before her wedding with her.

The unnamed bride, believed to be from the UK, revealed she had asked her maid of honour to spend the day and the night before the wedding with her.

However, she was left fuming when the friend’s husband explained to her that he had planned a romantic day out to celebrate her own birthday, and that she wouldn’t be free to help her with wedding preparations.

After taking to Reddit’s Am I The A******  to explain the situation, she was slated by other users – many of whom called her selfish and said she was acting like a ‘bridezilla.’ 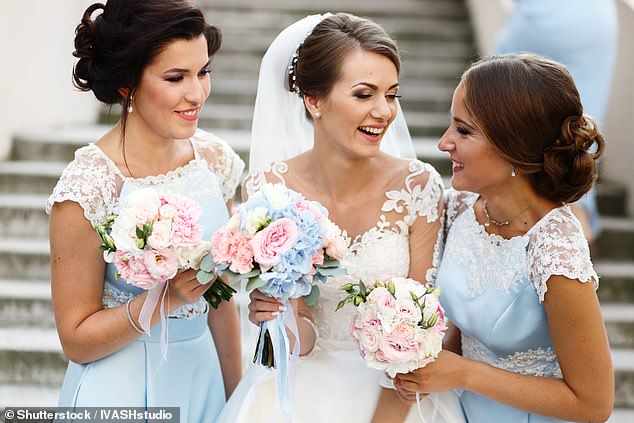 The bride started the post by explaining that she and the maid of honour, as well as the groom, shared the same birthday.

She said it happened to fall the day before the wedding.

The bride explained: ‘I had suggested to her that she join us (mine and fiancé’s family) for lunch and then help me to prepare for my wedding day.

‘I also asked that she share a hotel room with me the night before, so she can be there for me the moment I wake up, to support and calm me,’ she said.

She explained that the maid of honour agreed to stay with her in the hotel, but did not agree to attending the lunch and suggested she might have plans for the day. 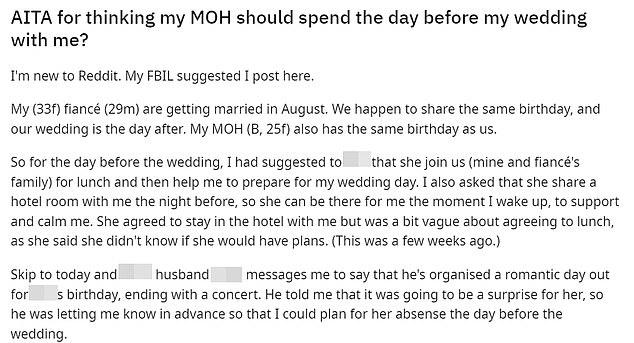 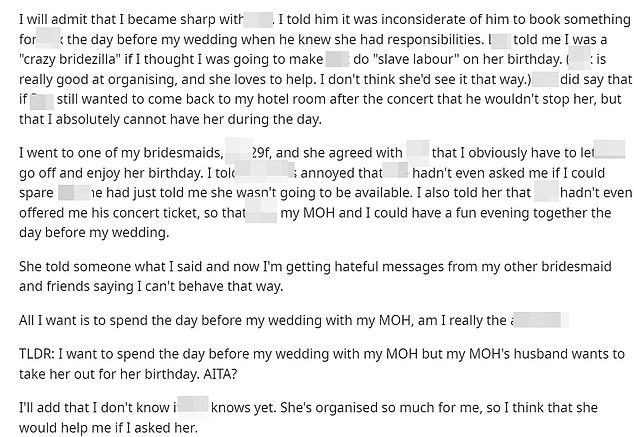 The bride shared her account on Reddit, admitted she was fuming that her maid of honour’s husband wouldn’t let her spend the day before her wedding with her, even if it’s her birthday

She continued: ‘Skip to today, her husband messages me to say that he’s organised a romantic day out for her birthday, ending with a concert.

‘He told me that it was going to be a surprise for her, so he was letting me know in advance so that I could plan for her absence the day before the wedding.’

‘I will admit that I became sharp with him. I told him it was inconsiderate of him to book something for her the day before my wedding when he knew she had responsibilites.

‘He told me I was a “crazy bridezilla” if I thought I was going to make her do “slave labour” on her birthday.’

She added that her friend is really good at organising and loves to help and wouldn’t agree with her husband.

She continued: ‘He did say that if she still wanted to come back to my hotel room after the concert, that he wouldn’t stop her, but that I absolutely cannot have her during the day.’ 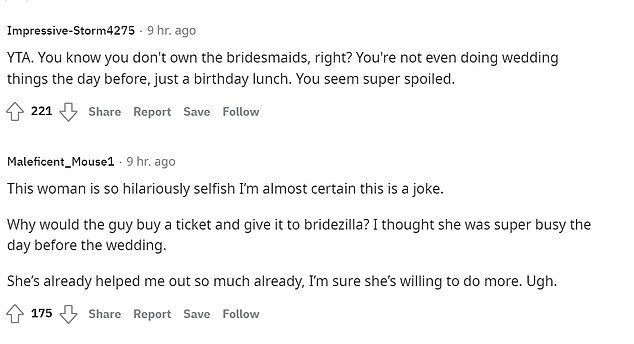 The bride then took this news to one of her bridesmaids, who agreed that the maid of honour should be able to enjoy her birthday however she wants.

The bride’s post continued: ‘I told her I was annoyed that he hadn’t even asked me if I could spare her, he had just told me she wasn’t going to be available.

‘I also told her that he hadn’t even offered me his concert ticket, so that  my maid of honour and I could have a fun evening together the day before my wedding,’ she added.

After this, the bride said members of the wedding party have been sending her ‘hateful messages’ telling her she can’t behave in this way.

However, her plea for sympathy fell on dead ears, as many people who read her story agreed she was being selfish and entitled.

‘WOOOOOOOOOW. Wow. Seems to me like you’ve been taking advantage of a kind friend.

‘Let your Maid of honour enjoy her birthday. She’ll be there with you at the wedding. (Also, you’re a bridezilla.),’ one said.

‘I’d be genuinely surprised if her antics don’t scare off either the groom or the best friend before the wedding takes place.

‘Based on her behavior, I hope they both make a run for it before it’s too late,’ one said.

‘You’ve fallen into the Bridezilla trap. Your wedding is super special for you. You aren’t entitled to dictate what your maid of honor does on her birthday,’ another wrote.

‘You know you don’t own the bridesmaids, right? You’re not even doing wedding things the day before, just a birthday lunch. You seem super spoiled,’ one wrote.

‘This woman is so hilariously selfish I’m almost certain this is a joke,’ one said.

‘I immediately thought that Maid of honour went to her husband and they found a way for her to still celebrate her birthday on her terms,’ another suggested.

‘It’s wonderful if someone wants to volunteer days of their time for your wedding, but it should not be the expectation,’ one said.

And some took issue with the most specific requests from the bride.

‘Why does she need someone there “from the moment [she] wakes up, to support and calm [her]”? It’s a wedding, not a funeral,’ one said.

YTA if you need an emotional support animal get one because that’s not her job,’ one wrote.

‘Your maid of honour does actually have a life of her own, she is not your emotional support animal,’ another wrote.

‘It’s her freaking birthday for God’s sake. You want her to spend her ENTIRE birthday catering to YOUR needs? Talk about selfishness,’ one said.

‘She isn’t your servant she’s your friend she gets to have a birthday,’ another said.

‘First-Why on earth did you pick the day after your birthday and her birthday?! You can’t possibly be serious about treating your friend like a free wedding planner and to “calm you” like you are a toddler. It’s a wedding, not open heart surgery,’ one said.

‘Her husband owes you nothing. How could you think he would give you his ticket to a concert for his wife’s birthday? Maybe he is sick of you treating his wife like an unpaid assistant and wants to spoil her for her birthday. She had obviously done a lot of stressful stuff for you and he seems to want to make her feel special on her birthday. If you keep pressing you will lose her friendship,’ they went on.

My children pick their own bedtimes, have a vegan diet and go barefoot – people accuse me of ‘abuse’ but I’m confident in my decisions

Woman sparks debate after sharing her theory on exactly what time a man will choose to get married: ‘I’ve heard it and I’ve seen it’