In a sign of changed times, the new Borat is far less funny than its predecessor

The meat of the 2006 film lay in the gleefully ill-natured pranking of "ordinary" Americans, lured into taking Borat at face value and frequently all too ready to echo his prejudices. It's the kind of trick, you might assume, that can only work once – and indeed, Baron Cohen subsequently announced that he was retiring the character, who had grown too celebrated to stand much chance of fooling anybody. 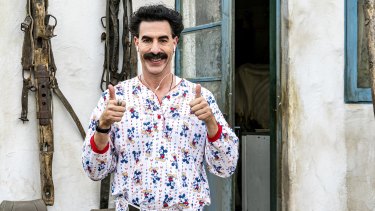 Still, fourteen years on Borat has been unleashed on a radically changed world in this straight-to-streaming sequel, with TV director Jason Woliner replacing Charles at the helm. Borat, it emerges, has spent the last fourteen years on a chain gang back in his homeland, imagined once more as a medieval hellhole peopled solely by village idiots. Offered the chance to redeem himself and his nation, he embarks on a second expedition to America, this time with the goal of presenting a "gift" to legendary ladies' man Mike Pence.

His travelling companion this time round is his 15-year-old daughter Tutar, played by the Bulgarian newcomer Maria Bakalova with a commitment to match Baron Cohen's own. A glaring ragamuffin who barely comes up to her daddy's shoulder, she has her own agenda for the trip: tethered to a rope in a decrepit barn, she dreams of escaping like her heroine Melania, whose fairytale romance is portrayed in a spoof Disney cartoon. The film will be the story of her awakening. 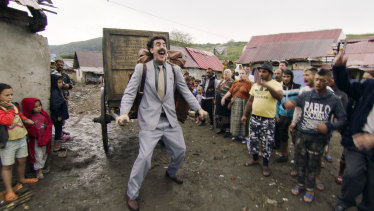 Though it’s still outlandish, social change means the new Borat film doesn’t have quite the same impact as the original did in 2006. Credit:Amazon Prime

With the novelty value gone, the rise of COVID-19 comes as a perversely welcome plot twist, forcing the Baron Cohen brains trust to reinvent their game plan on the fly. Separated from his daughter and forced to quarantine, Borat finds refuge with a couple of grizzled alt-right types from central casting, who for all their paranoia prove almost supernaturally tolerant of their foreign guest. It's one of several points when Baron Cohen, by design or otherwise, reveals as much compassion as cruelty in those he encounters, to a degree that sometimes stops the comedy dead in its tracks.

Indeed, it must be said this Borat on the whole is far less funny than its predecessor (or, indeed, than Baron Cohen's audacious 2018 TV show Who Is America?, which contains some of his best work). To a degree, it's the whole masquerade strategy that has dated: Baron Cohen disguises himself when necessary in a range of un-Borat-like outfits and wigs, but the mere presence of a camera now appears to trigger more caution than in an era when the phrase "going viral" had not yet entered common parlance. 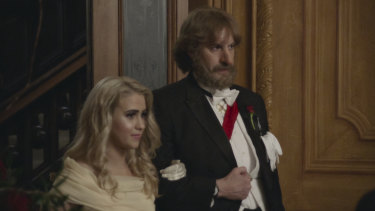 There is, too, the fact that Baron Cohen's grotesques are these days rivalled by numerous non-fictional personalities on the American scene, including a president who has undoubtedly had his Borat moments. In the interest of managing expectations, it should be warned that Baron Cohen never gets within spitting distance of Trump, though he and Bakalova do succeed in embarrassing prominent Trump supporter Rudy Giuliani in a manner that has already triggered real-world fallout.

That the film has been timed for a week before the US presidential election in a sense gives the game away. Where Borat was once a phenomenon in his own right, at this point he can hardly hope to be more than a sideshow to the main event – and in an era when suspicion is widespread we're all being pranked one way or another, there's an almost nostalgic appeal to a conman willing to come clean about his scams.