In The Style raises £100,000 for The Samaritans in less than 24 hours by selling £10 t-shirts printed with Caroline Flack’s ‘Be Kind’ quote

Online retailer In The Style has raised £100,000 in donations for the suicide prevention organisation The Samaritans by selling Caroline Flack t-shirt.

In the Style, a UK-based label, printed £10 t-shirts with the inspirational quote shared by Caroline before her untimely death on Saturday, which read: ‘In a world where you can be anything, be kind’.

Now the online retailer is struggling to keep up with demand from fans, and has had to restock the tops due to ‘unprecedented’ demand.

After waiving delivery charges to ensure all proceeds go to charity, the retailer announced it’s raised £100,000 since yesterday.

The presenter, 40, took her own life in her London flat after suffering from depression for months, and just hours after she was told she would face trial for allegedly assaulting her boyfriend Lewis Burton, something she denied. 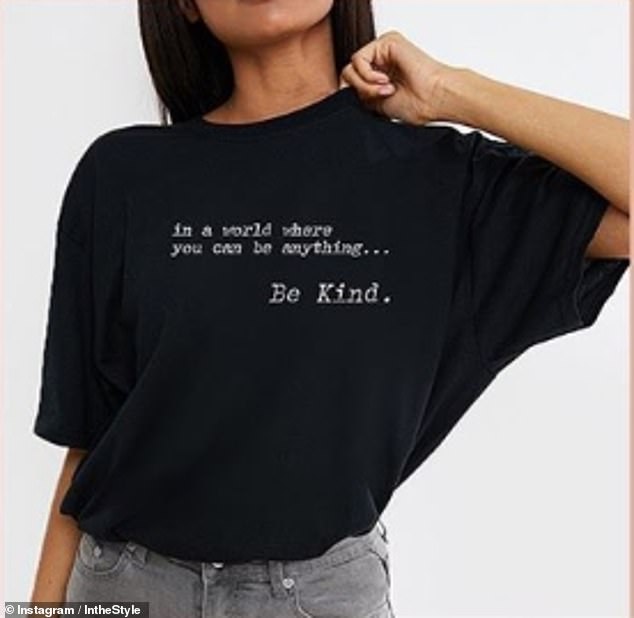 UK-based online retailer In The Style raised £100,000 in donations for the suicide prevention organisation The Samaritans by selling Caroline Flack t-shirt (pictured) following her untimely death 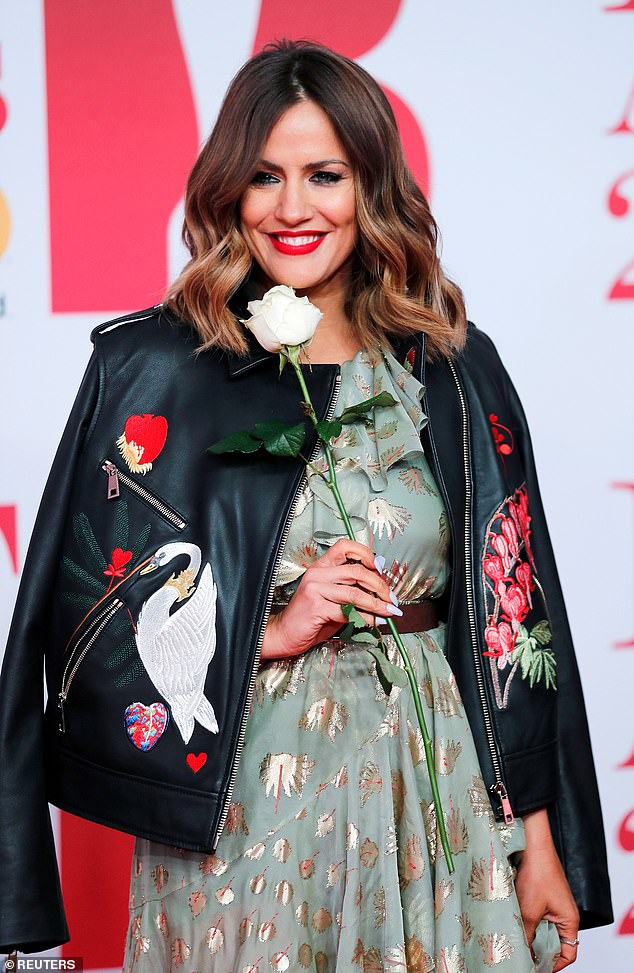 The beloved TV personality Caroline Flack, 40, took her own life and was found dead in her London flat on Saturday (pictured at the Brit Awards in London on February 21 2018)

The t-shirts are available in three colours: white, grey and black, and cost £10 each.

‘We are completely overwhelmed by the support for the #BeKind tee,’ the brand wrote on Twitter. ‘We have already raised over £100,000 for The Samaritans in just a few hours!

‘Sorry to anyone who hasn’t been able to support yet – the demand has been unprecedented! We will have more stock on by 12pm today for you.

The brand announced it would be rolling out the shirts yesterday on Instagram and other social media platforms.

‘In light of recent tragic events and the ongoing mental health battles faced by so many we feel it’s so important as a brand to use our platform to raise further awareness to mental health and the impacts surrounding this,’ the post read. 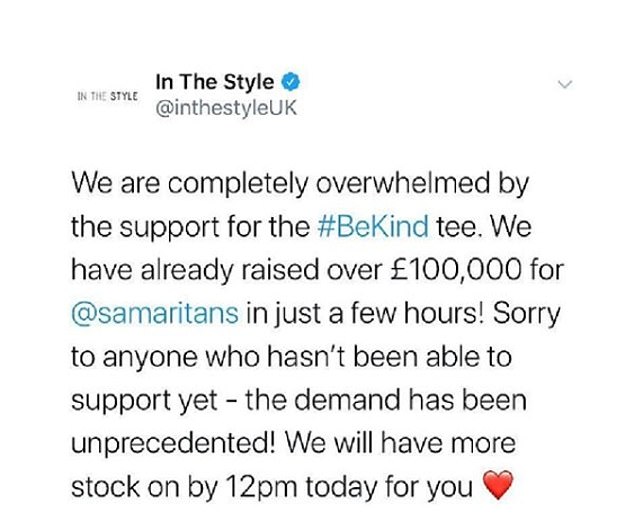 In the Style said they had been completely overwhelmed by the number of sales they made for the Samaritans, raising £100,000 for the charity

‘You honestly NEVER know what goes on behind closed doors and being kind costs nothing. We have created a “Be Kind” tee and will be donating 100 percent of ALL profits to @samaritanscharity,’ it went on.

‘We want to be very clear that as a business In The Style will make no money whatsoever. We have also waived all delivery charges for purchases on the tee, as this is solely to raise money and awareness for a very worthy charity.’

‘Hopefully in light of such devastating news, we can all learn a very valuable lesson that in a world where we can be anything… be kind.’

Caroline took her own life after a worried friend who was staying with her went to the shops, leaving the ex-Love Island presenter alone at her London flat. 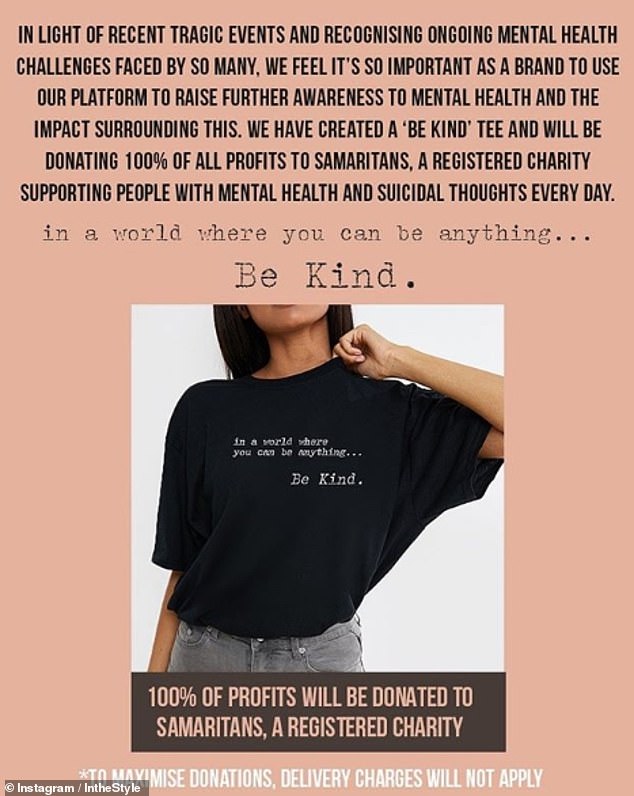 The UK retailer vowed they would not be making a profit on the charity t-shirts sold for Samaritans, and promised delivery charges would not apply

It came just hours after she was told she would face trial for allegedly assaulting her boyfriend Lewis Burton, something she denied.

Her management have slammed the Crown Prosecution Service (CPS) for pursuing the ‘show trial’ after Lewis said he did not want to press charges.

He had said she hit him with a lamp at her former home in Islington in December before asking the CPS not to press charges.

The TV presenter’s death was confirmed by a lawyer for the family. The Flack family said in a statement: ‘We can confirm that our Caroline passed away today on the 15th February. We would ask that the press respect the privacy of the family at this difficult time.’

If you have been affected by this story, please call the Samaritans on 116 123 or visit www.samaritans.org.