An Indonesian teenager is telling an extraordinary story of how he survived seven weeks adrift at sea. Aldi Novel Adilang, 19, worked alone on a wooden fishing raft called a “rompong,” which is used to trapped fish. In July, a storm snapped the line that connected his raft to the seabed, sending him helplessly adrift without a motor or paddle for 49 harrowing days.

Within a week, Adilang said he ran out of food and survived on the fish he caught and cooked using wood from the raft. One report said he strained ocean water through his clothes to drink.

Adilang said he lit a lamp on his raft every time he saw a passing ship — more than 10 times — but none responded, according to The Jakarta Post. But three weeks ago, after his raft drifted some 1,200 miles from its original location in Indonesia to Guam, Adilang sent an emergency signal to a passing ship on his hand held radio. Finally he got a response and was rescued by Panamanian vessel.

Adilang swam to safety and the crew hauled him onto the ship where he was given a blanket and some cookies. He is back home with his family but there are questions about his employer. This is the third time that Adilang’s fishing vessel has gone adrift. 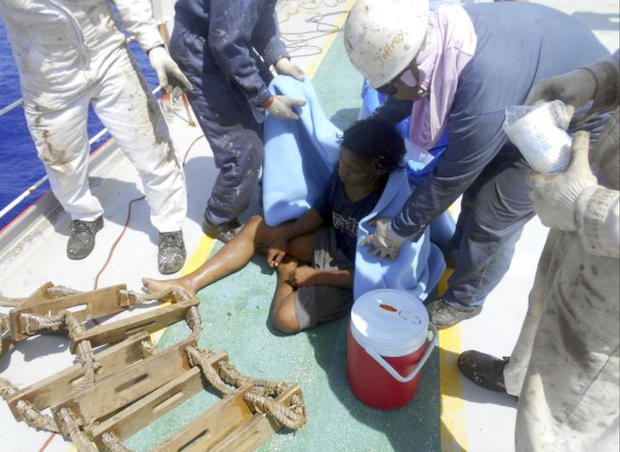 In this undated photo released by Indonesian Consulate General in Osaka, Aldi Novel Adilang sits on the deck of a Panamanian-flagged vessel, MV Arpeggio after being rescued in the waters near Guam.