Big industries would be offered protection in a federal plan to achieve net zero emissions by 2050 using incentives for sectors like resources and farming to lift exports under a new climate change policy.

Energy Minister Angus Taylor is telling industry it will not be hurt in the shift to net zero and that key export sectors such as gas will keep producing for “many, many years” under a new policy road map. 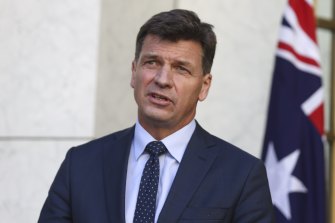 The government is preparing to reveal its new climate targets and technology road map early next week with a message to industry that there are no “nasties” in the package.

Agriculture Minister David Littleproud is also promising credits for farmers to boost biodiversity with conditions that aim to prevent investors buying up too much land when it should be used for farming.

The policy package is due to go to federal cabinet on Wednesday ahead of a meeting of the Nationals party room this Sunday and a full Coalition party room debate on Tuesday, clearing the way for an announcement during Parliament next week.

Mr Taylor rejected calls from environmental groups to phase out gas exports and insisted the government could achieve net zero emissions, although he is yet to endorse 2050 as the date for the target.

“It has been easy to say that the LNG industry has no role in the future of our energy system or energy systems around the world, but this is wrong, this is clearly wrong,” Mr Taylor told a business forum on Tuesday.

“This is still a hugely important fuel source, not only for the direct supply of natural gas into customer markets but also in the role that it can play in decarbonising through the production of ammonia and hydrogen.

“Queensland’s gas supply, and the industry around that, will continue to be a very, very important one for many, many years to come.”

The Energy Minister, who also gained the industry portfolio in the government’s small reshuffle last month, told the Committee for the Economic Development of Australia on Tuesday that net zero emissions did not mean no carbon emissions at all.

“For a country like Australia, this is the difference between destroying some of our greatest economic strengths, our traditional industries that have given us enormous prosperity over a long period of time,” he said.

“Agriculture, heavy industry, resources. We don’t want to see those industries being badly damaged. And they don’t need to be.

Government officials said Prime Minister Scott Morrison was more likely than not to go to the United Nations climate summit in Glasgow for its opening days, when leaders address the gathering on November 1 and 2.

The government is also confident of a deal with Nationals leader and Deputy Prime Minister Barnaby Joyce to ensure majority support in the Nationals party room for a climate package that includes spending measures for regional Australia along with the net zero target.

Some parts of the policy have already been shared with senior cabinet ministers including Mr Joyce. The package includes an updated version of the government’s technology industry road map, which outlines spending in areas like hydrogen and renewable energy, as well as potential targets to reduce emissions.

Mr Littleproud said the Nationals were taking a responsible approach.

“The vast majority of the party room are being pragmatic and want to see the details of the plan before they make a determination, and I think that’s the responsible thing to do,” Mr Littleproud said.