When celebrities hang out with Bustle editors, we want to give them the chance to leave their mark. Literally. So we hand them a pen, a piece of paper, a few questions, and ask them to get creative. The rest is up to them. This time, Insecure star Natasha Rothwell is leaving her mark in the Bustle Booth.

On this season of Insecure, Kelli (Natasha Rothwell) goes on quite the Coachella journey. After getting into a fight with a woman who was blocking her view at the festival, she’s forced to leave the grounds before Beyoncé takes the stage. Upset at missing the biggest performance of the festival, Kelli attempts to make a run back into the festival — but she’s tased by security and immediately drops to the ground. As she rolls over, audiences see that her jeans are wet. "I pissed myself," she moans. "Don’t look at me. Remember me different."

It’s an already iconic scene and episode that will go down as one of Insecure‘s best so far, and that’s credit to Rothwell’s utter dedication to playing Kelli. But while she’s comic relief onscreen, Rothwell is also a co-producer on Insecure behind the scenes. The actor recalls getting a text from showrunner Prentice Penny containing a video of a woman getting tased at McDonald’s with the caption "Kelli" and feeling a mixture of emotions.

"[A]s a writer, I’m like, ‘This is hilarious for Kelli,’" she tells Bustle. "And then I show up on set and I’m like, ‘OK, I’m gonna have to piss myself. I’m going to get tased and piss myself today!’" 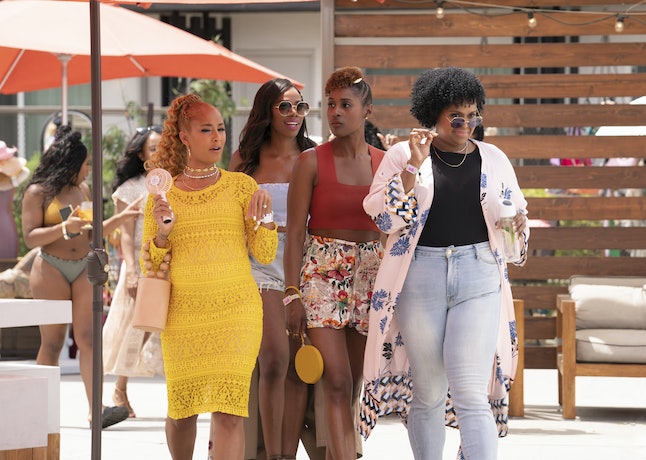 It should be noted that Rothwell does not, in fact, actually pee her pants. Rather, it’s water that sprayed on her jeans for the desired effect. Rothwell also wore several versions of Kelli’s robe in the scene. "They added another panel in the back so it would flow when I would run, just to make it more dramatic," she laughs. And while it’s over in a matter of seconds, filming the tasing scene was an incredibly involved process. The Coachella scenes were filmed on an overnight shoot in the freezing cold, and Rothwell had to do multiple takes of the scene from different angles.

The result is, of course, hilarious, with Kelli rolling around on the grass with her wet jeans, tased and high. As for her iconic line, the comedian related to her character — perhaps a bit too much. "I think I felt it on a very personal level!" Rothwell laughs. "I was like, writhing on the ground in the valley in the middle of the night with wet pants, and I was just like, ‘Remember me different.’"

It’s clear that Rothwell has the utmost respect for her character, and she rejects the notion that Kelli’s Coachella behavior was crazy. "She’s given herself permission to make mistakes and not feel like she has to be socially acceptable all the time," she explains. Later on, the comedian echoes this sentiment by saying, "I’d say that she’s prone to having fun — manageable fun for her." 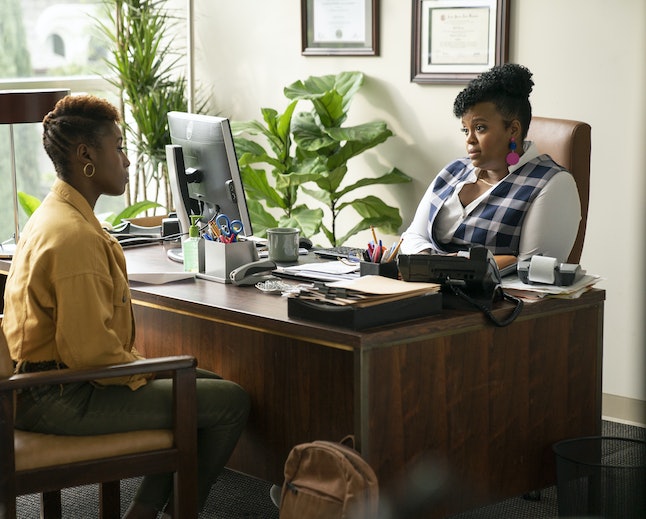 This season, it becomes clear that Kelli is able to fully separate her work and personal life; she’s impressively responsible and mature when Issa visits her at her office, where she’s a CPA. "What I love about that is it proves that she’s just really excellent at balance," Rothwell says. "So she can have fun and enjoy herself with her friends…. and also hold down the job. Like, she secures the bag, and she knows how to turn up." You know what that is? It’s growth.

And while Kelli may let loose with her friends, Rothwell speculates that her character has an excellent credit score — one that’s definitely better than Issa’s atrocious 425. What’s more, the Insecure actress says that these idiosyncrasies make Kelli a dynamic character rather than a caricature. "Because I feel like so often, especially for plus-size women and women of color who are in film and television, those roles tend to be pretty flat," she says. "Because they’re just like, ‘You’re going to do one thing, and we don’t need to know that you have a job. We don’t need to know that you have feelings other than to make us laugh.’"

So while Kelli has given audiences some of the best comedic moments of Insecure, she’s also becoming a fully fledged character. In other words, prepare to remember her different.