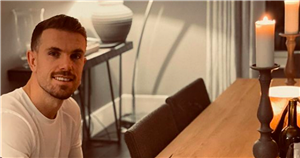 It's coming home has been the chant ricocheting around England recently, following the success of the boys as they won against Ukraine.

The team now get set to play Denmark on Wednesday and fans are behind them as they battle it out in a bid to make it to the final.

Jordan Henderson is among those impressing fans far and wide with his football talents on the England squad, and while his first home may well be the pitch, he can go and relax in a gorgeous pad when he's not playing.

Jordan, 31, lives with his beautiful wife Rebecca Burnett and their three children.

Football pro Jordan has shared the occasional peek inside his glamorous abode with his 4.1 million Instagram followers.

Jordan sat in his lounge with his daughter while she played the guitar, and inside we can see cosy sofas in grey with black and white scatter cushions.

The room is cosy and abuzz with glamorous decor, including lamps with gold bases and mirrors hanging on the walls.

Another glimpse saw Jordan posing next to a well-decorated Christmas tree while donning a playful festive jumper, and the Liverpool skipper also shared a look at his driveway while sharing a moment with one of his children.

We also got a peek inside Jordan's dining room with a vast wooden table and seats in, as he tucked into a Sunday roast.

The candlelit room looks like the perfect spot to invite family and friends to for lazy brunches or family get-togethers.

Another look inside Jordan's home came as he celebrated turning 30 inside a stylish teepee in his garden.

The star had big silver 30 balloons and cosy bean bags to set the mood on which he sat to watch the football.

Jordan and his wife Rebecca tend to keep their lives very low-key when he's not playing on the pitch.

They are believed to have met as teenagers while he was at Sunderland, and Rebecca is very supportive of her beau and is often seen at his matches.

Jordan rushed to be at his wife's side for the birth of his second child, before driving back to Wembley to play in a semi-cup final in 2015.

Rebecca also brought the brood along to Russia as they cheered Jordan on during the World Cup.