Inside the glitzy kickoff party for the world's biggest horse sale, where 300 of the industry's elite sipped on rare bourbons ahead of dropping millions on horses

Lexington is surrounded byhundreds of horse farms and is home to the world’s largest thoroughbred horse auction house, Keeneland, which also hosts races.

In September is Keeneland’s yearling sale, where people drop millions on year-old horses who’ve never even been ridden. In 2018,more than $377 million worth of horses were sold at Keeneland’s September sale.

I flew down to Lexington for the sale, but first, I managed to score an invite to the sale’s exclusive kickoff party at an upscale events venue called the Apiary.

Keeneland’s annual September yearling sale in Lexington, Kentucky, is the biggest horse sale in the world, with more than $377 million worth of horses sold in 2018. 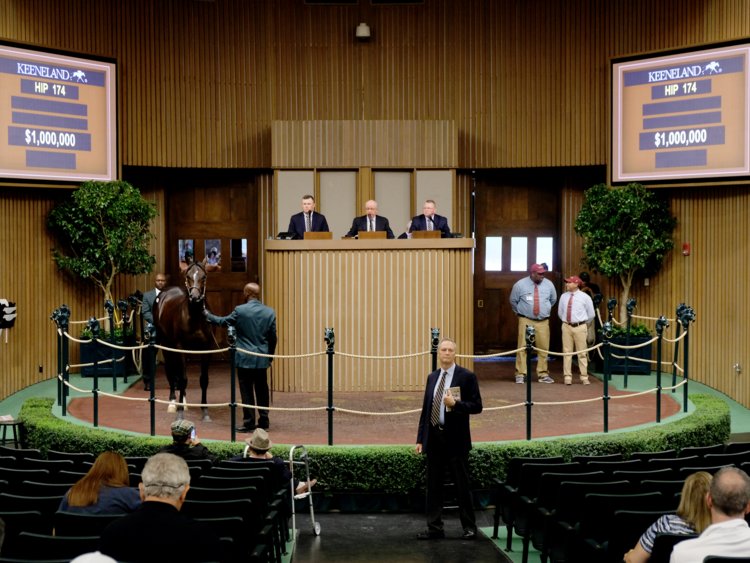 Keeneland is a horse racing company as well as the world’s largest thoroughbred auction house, based in Lexington, Kentucky. ItsSeptember sale is for yearlings only, meaning year-old horses who have never even been ridden.

Last week, I flew down to Lexington for the first couple days of the sale.

The evening before the sale started, Keeneland hosted a kickoff party at the Apiary, an 8,100-square-foot upscale events venue in downtown Lexington. 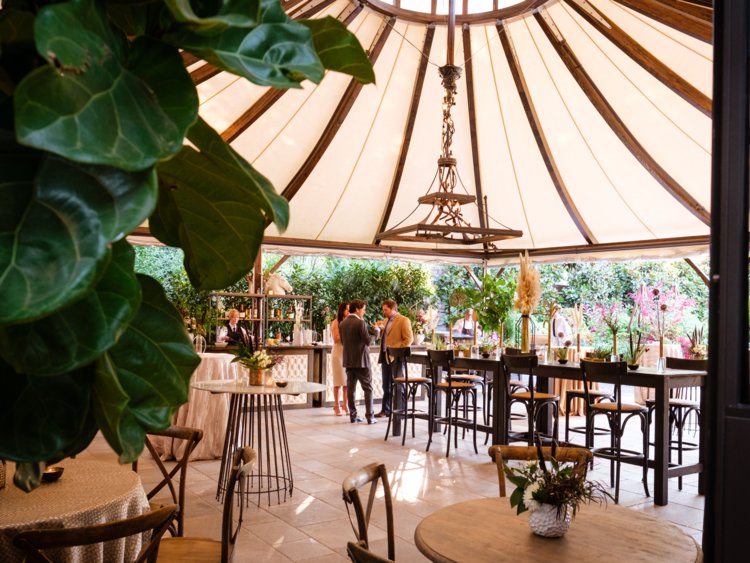 I got an invite to the exclusive party, which started at 7 p.m. on Sunday. I arrived right on time.

After handing off my car keys to the valet, I walked through a pair of ornate wooden double doors into a courtyard, where a couple of staffers were checking people in from the guest list. 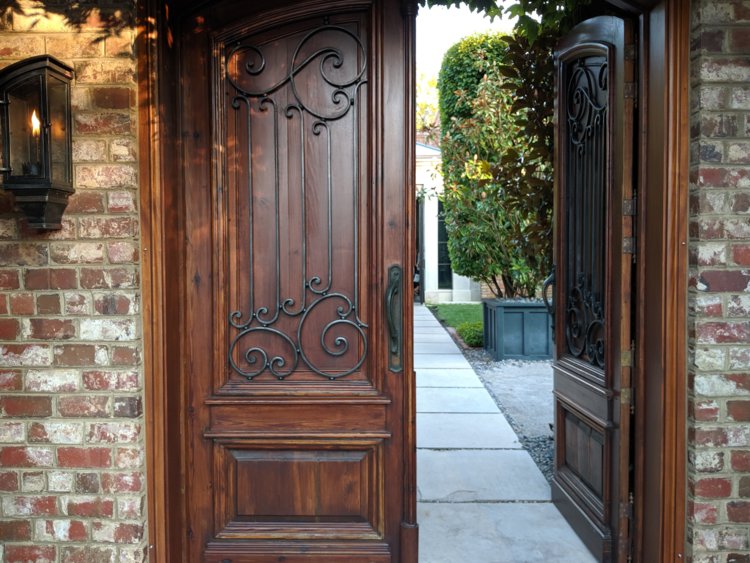 After I checked in, I headed for the entrance to the venue, but before I got there, a server offered me a frozen margarita. I liked how this party was starting.

Inside, I was met by an elegant bar. 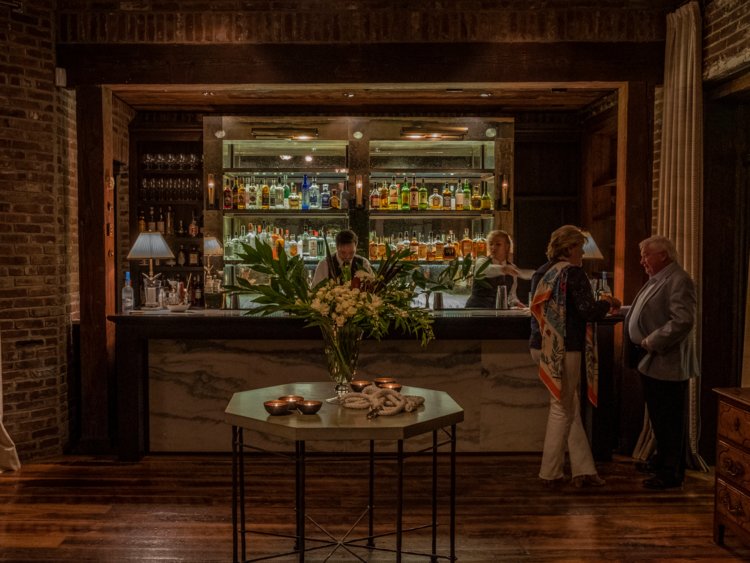 The venue had a warm and cozy feel, with wooden floors and exposed brick walls.

I made my way to the venue’s main hall, which featured soaring ceilings and large windows. 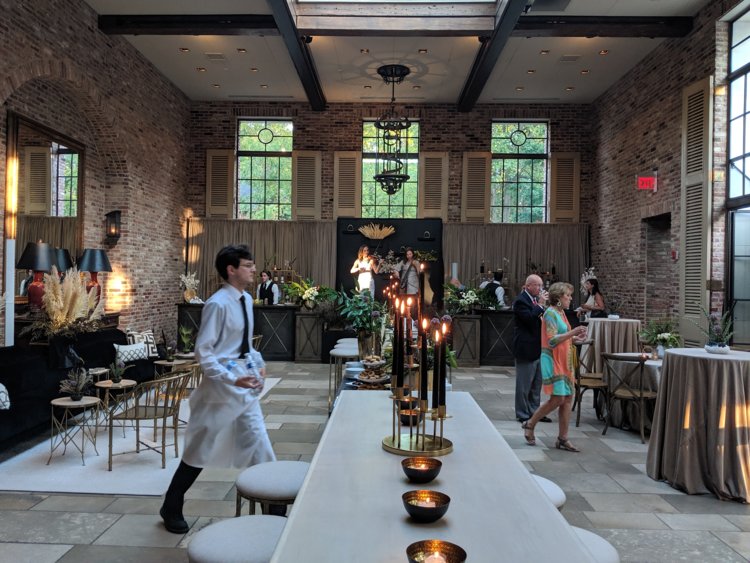 The space was set up with tables of various sizes decorated with flickering candles and platters of tiny desserts.

Not many guests had arrived yet, so I meandered around taking photos and wondering when it was too soon to start eating the food. 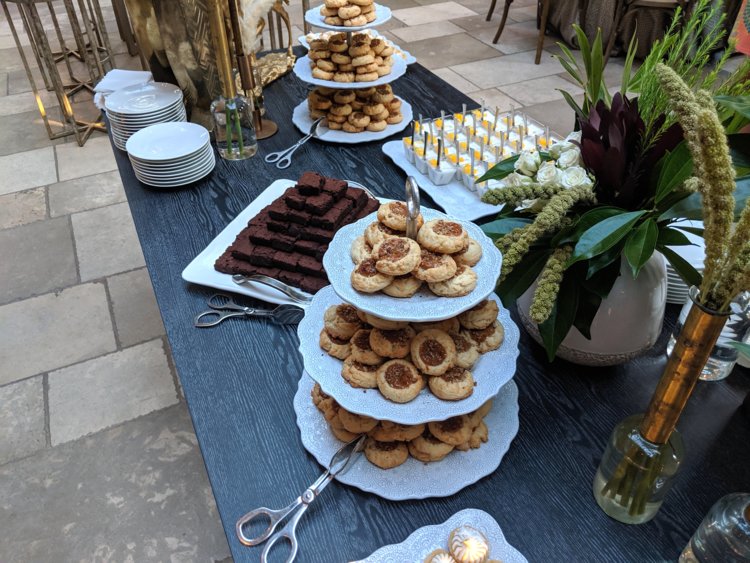 On one end of the hall, an electric violin player and an electric cello player were performing. 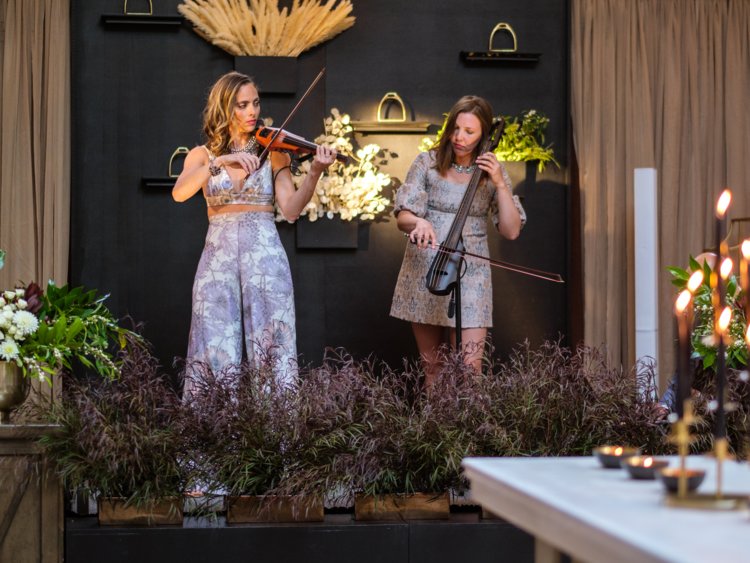 Outside, a cocktail and buffet area was covered by a large tent and surrounded by a garden. 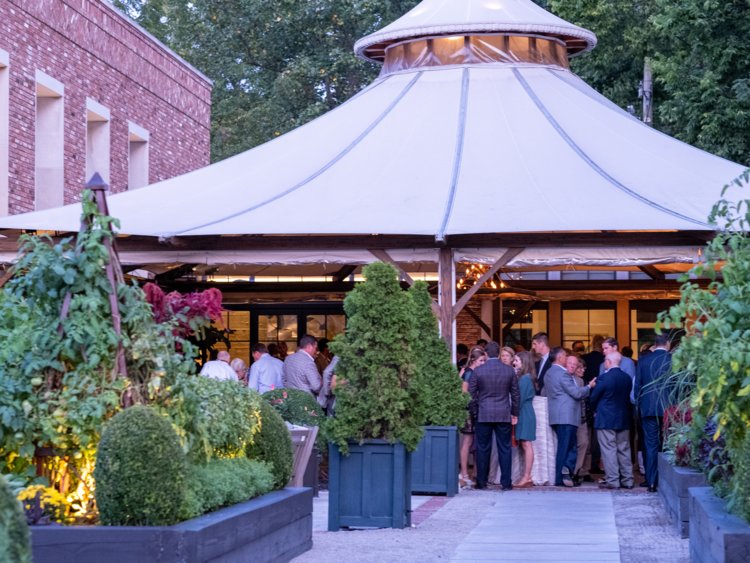 The food menu was served buffet-style by the venue’s chef-proprietor, Cooper Vaughan, and his team. 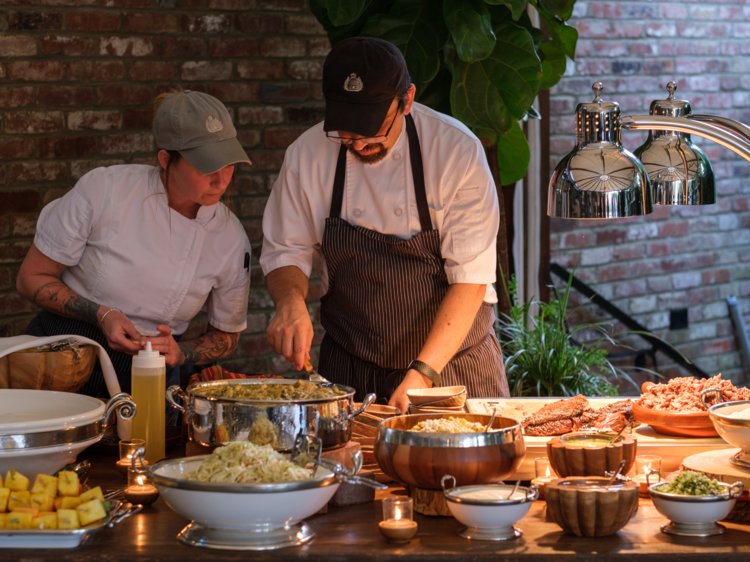 According to the event planner, the guests at the party were the elite of the horse racing world. 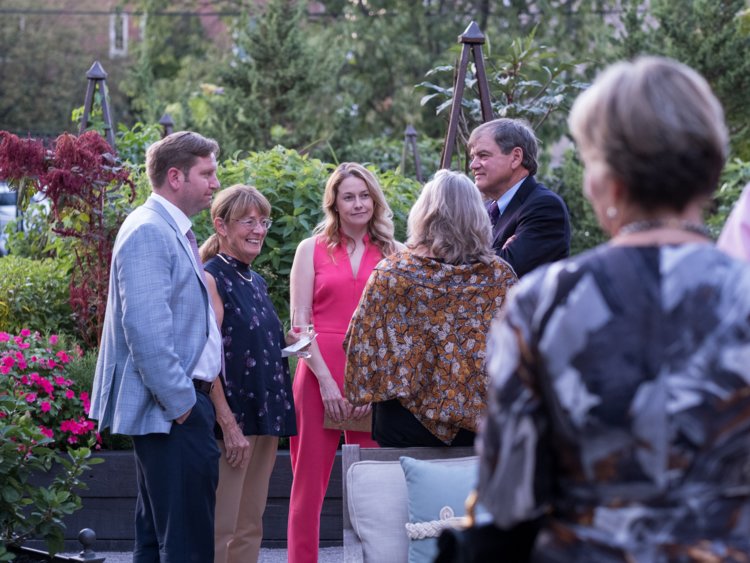 Event planner Freya Kelly told me that the invitees to the Apiary party were horse buyers, sellers, and consigners (a type of agent that arranges for a horse to be sold auction) of the Keeneland sale’s Book 1, which comprises the most sought-after and expensive yearlings that are sold during the first few days of the sale.

The guests at the party were all dressed in stylish cocktail attire. 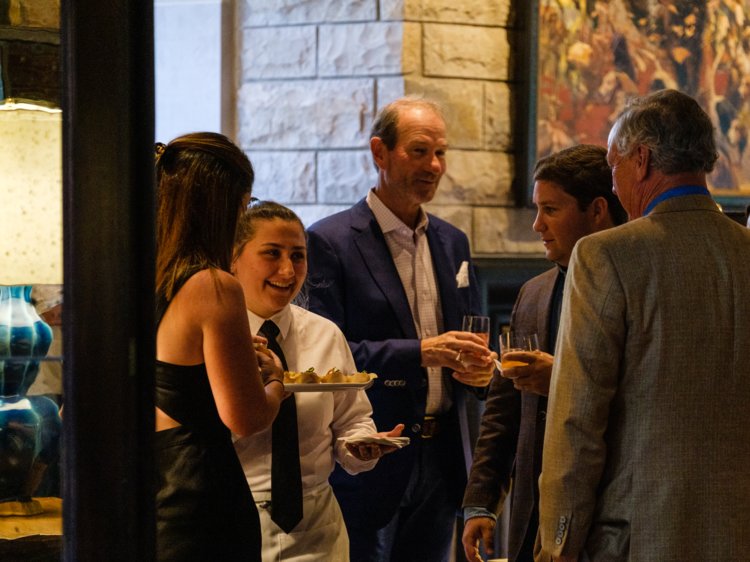 The dress code had said “business casual,” but I felt like most people were a step up from that. Every single woman seemed to be wearing heels, which made me feel a tad underdressed in my black flats.

Down in the cellar of the venue was a rare bourbon tasting, which included bourbons from Buffalo Trace, Weller, and Taylor. 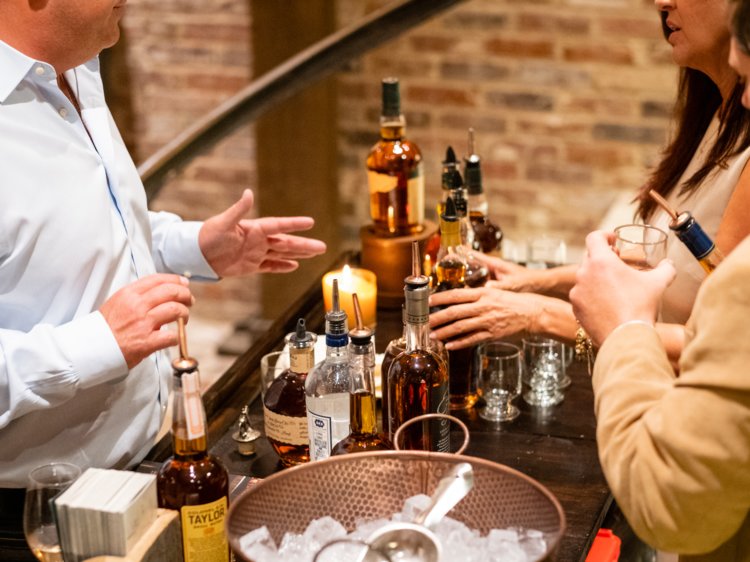 I tried some Weller with ginger ale and decided maybe I don’t hate bourbon after all.

A couple hours into the party, Keeneland President and CEO Bill Thomason called for a Champagne toast in honor of the horse, because “the horse is the reason for our existence and why we do what we do,” he said. 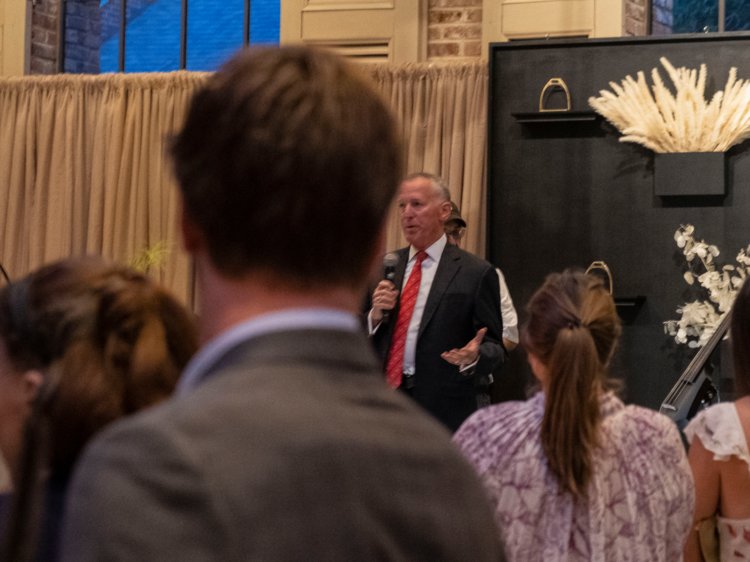 As Thomason spoke, bottles of Dom Perignon Champagne were popped and servers passed through the crowd passing out glasses of bubbly. 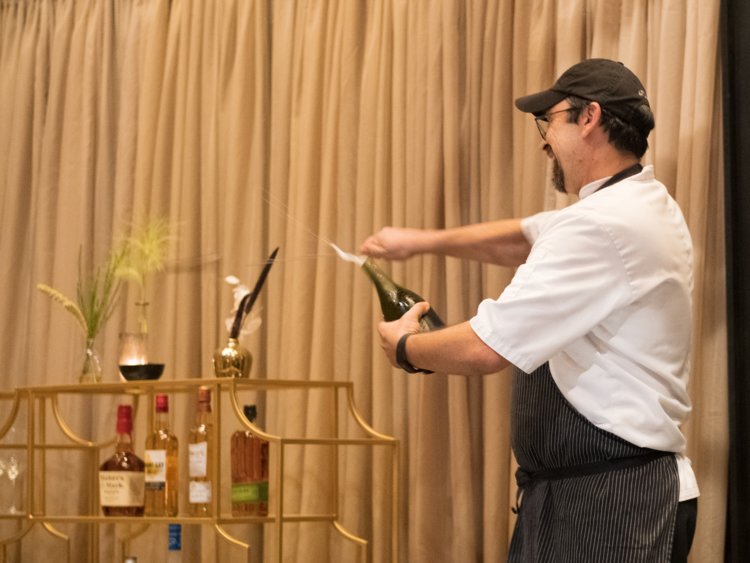 I somehow missed getting a glass, but I had my bourbon and ginger.

After the toast was over, we could finally move onto more important things, namely dessert. I tried a tiny brownie, a tiny meringue puff, and some sort of shortbread cookie. All were delicious, but the brownie was especially delectable.

As the night wore on, and some of the horse racing industry’s most important people drank bourbon and Champagne and talked about the upcoming sale, I was amazed by the breadth of this whole world to which I’d previously barely given a thought. 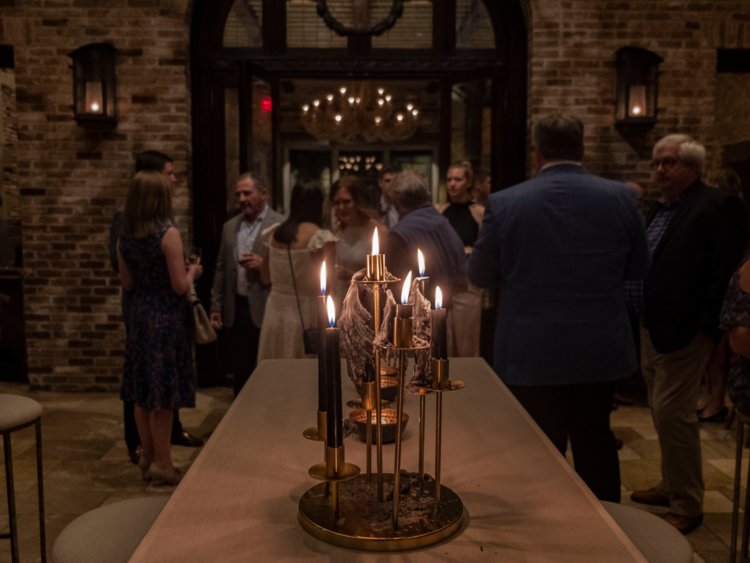 I spent much of the night with a New York-based publicist working for Keeneland, and we both marveled at the amount of wealth in the room, and how all of these people had lives that revolved around horses.

According to the American Horse Council,horses are a $122 billion industry in the US.

During Keeneland’s September sale, which began the following day, the people in the room would spend hundreds of thousands or even millions on year-old horses in hopes they’d be the next great race horses. The first day of the sale,more than $46 million worth of horses would be sold in a single day.

The party ended relatively early; I headed out at 10 p.m., by which point most people had filtered out. 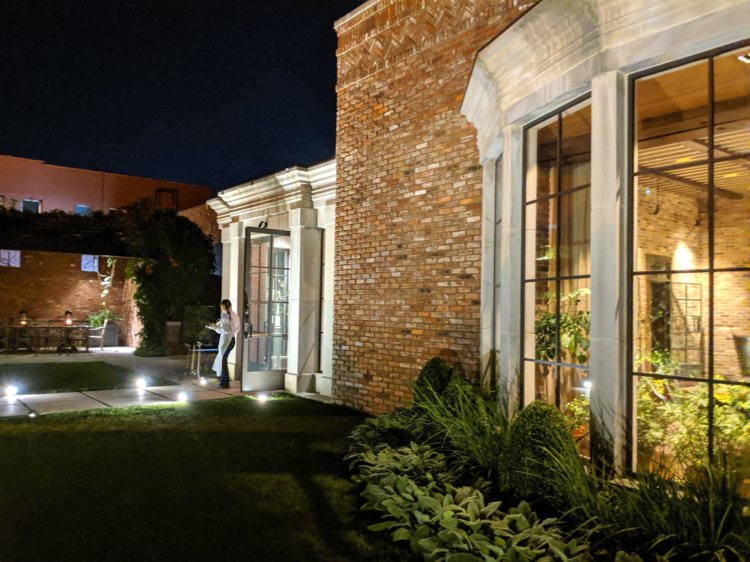 After all, everyone had a big day ahead of them. And for me, the ritzy Apiary party was just a taste of what was to come.

SEE ALSO:I toured a $975-a-night luxury resort in Jackson Hole, and I found that it delivers on 2 of the top desires of wealthy travelers: privacy and experience

DON'T MISS:Millennials aren't buying baby boomers' ranches. In Montana and Arizona, 2 luxury ranches have been sitting on the market for over a year — take a look inside the $50 million package.