‘Beautiful AND practical!’ Internet goes wild over photographs of a bridal gown complete with POCKETS

The internet has gone into meltdown over a bridal gown featuring an ingenious design detail.

Esther Kezia Thorpe, from London, tweeted a snap of her friend wearing a voluminous Suzanne Neville frock featuring pockets at her wedding reception over the weekend.

She wrote: ‘STOP EVERYTHING so one of my friends got married yesterday and she had POCKETS ON HER WEDDING DRESS which is just the best thing I have ever seen.’

The picture quickly racked up thousands of likes, comments and re-tweets with brides going wild for the thoroughly modern design. 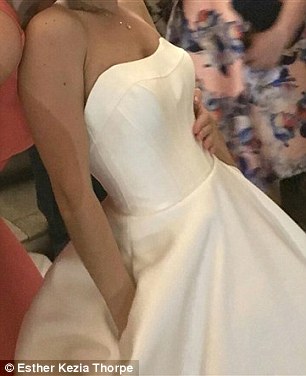 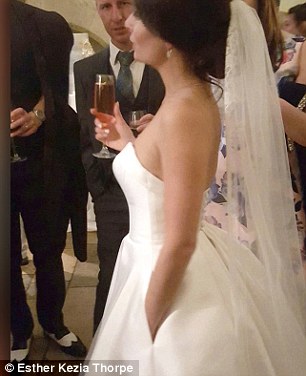 Details: Wedding guest Esther Kezia Thorpe was so impressed with the pockets sewn into her friend’s bridal dress, she shared the snaps on Twitter where they have since gone viral

Traditionally, bridal gowns do not have pockets – forcing the wearer to either carry a small clutch bag, or entrust her bridesmaids with keeping her phone, lipstick and other essentials.

The strapless ivory number, which the unnamed bride teamed with a veil, featured two pockets large enough to keep a phone and some essential makeup in – but it was the bride’s casual posture that sent Twitter wild.

Another enthused: ‘I would literally be screaming as I walk down the aisle, “IT HAS POCKETS.”‘

Some male users appeared baffled as to what brides could need pockets for; to which Esther replied, ‘Snacks, tissues, lipstick.’

According to The Times, Suzanne Neville is just one of a growing number of designers now incorporating pockets into their bridal designs.

They include Mirror Mirror Couture and Sassi Holford, who told the newspaper: ‘Customers get very excited when they try on a dress with pockets. It tends to make them feel more comfortable.’