Cuffing season is upon us, which might mean you’ve been cozying up with a new boo. Is it love, or are you just hooking up? If you’re casually dating someone, in a friends-with-benefits situation, or in the beginning stages of a budding romance, it can be tough to figure out exactly where your partner’s head is at. You might even be wondering, Is my partner secretly in love with me?

When you’re in the beginning stages of a relationship, it can be difficult to tell exactly when your bae goes from feeling you, to sprung, to totally infatuated. Sometimes, people can fall in love right off the bat, while other times, it may take a bit longer. Also, you could be in that nerve-wracking stage where "I love you" is right at the tip of your tongue, but you’re waiting for the other person to declare it first.

Shaelyn T. Pham, PhD, psychologist at Psychological Services & Holistic Health, Inc. and bestselling author of Love Match tells Elite Daily that "the best indication that you can count on is when they tell you that they’re in love with you." Well, that might be obvi, but if you catch feelings in a relationship that’s just a little bit too new to be exchanging ILYs, is there any way to know that they’re feeling the same way?

According to experts, here are seven signs that your partner is secretly (or maybe not-so-secretly) in love with you.

1They Want To Do Boring Things With You 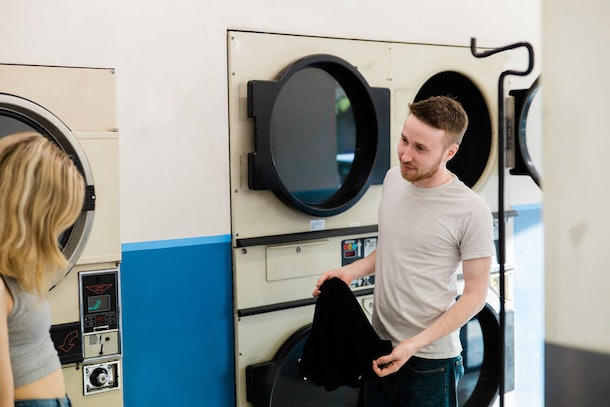 If your partner wants "to do life’s mundane things with you like grocery shopping and laundry," they could be secretly in love with you, says Bela Gandhi, president at Smart Dating Academy, a date coaching firm.

When you’re really digging someone, it’s natural to want to be around them all the time, no matter the occasion. Did this person volunteer to accompany you to the DMV? Well, they might be a keeper, so keep your eyes peeled for more signs that they could be smitten.

2They Want To Know The Real You 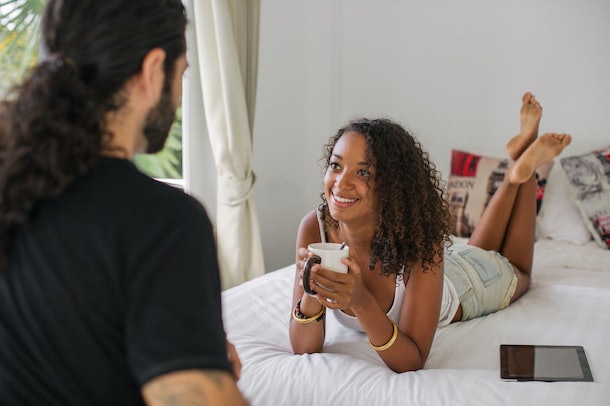 According to Gandhi, another clue might be if "they want to spend time with you, getting to know the real you." When someone has serious feelings, it will be important to them to get to know you on a deeper level.

Lawrence A. Siegel, clinical sexologist and certified sexuality educator agrees. When someone cares deeply for you, "they ask questions and want to know things about you," he says. However, they could just be a good listener or conversationalist — some people are better at this than others — so asking a lot of questions won’t necessarily guarantee that it’s love they’re feeling. When in doubt, open the line of communication around your relationship, before making any assumptions.

3They’re Vulnerable With You 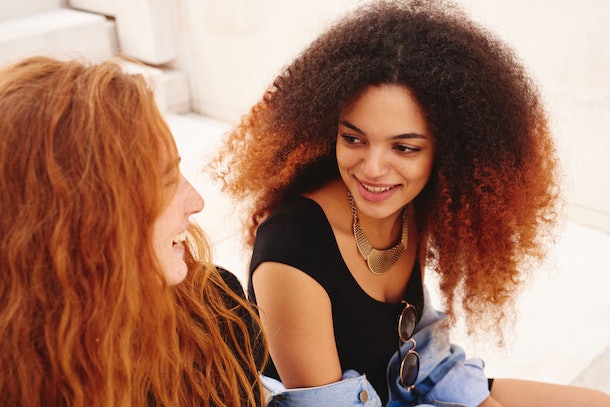 If your new bae is "open to giving and receiving love [and] showing vulnerability," they could have more than just casual feelings for you, Pham explains. IMO, vulnerability is key to a lasting relationship.

It can be tough to put yourself out there, but true love is all about moving beyond having the upper hand in a relationship. One of the most vulnerable things your partner can do is tell you that they’re in love with you, which can be scary! Just because they haven’t said it yet, that doesn’t mean they aren’t feeling it.

4They Care About Your Opinion 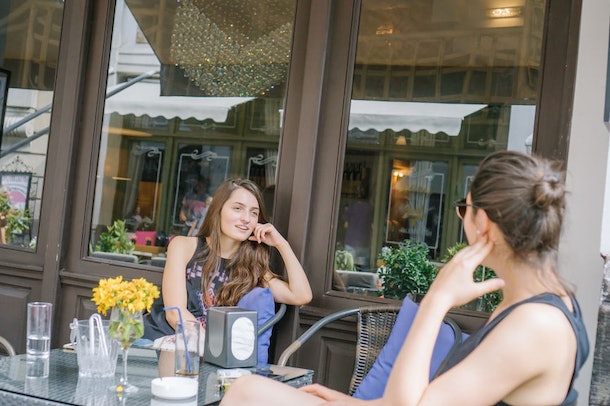 Another sign that your partner could be secretly in love with you is if "they share experiences or things they heard [with you] and seem to want your feedback," says Siegel. When something cool or interesting happens to you, who’s the first person you want to tell? If someone is in love with you, there’s a good chance that you’ll become their go-to confidant.

Long-term partnerships get their name for a reason — the whole idea is that you’re partners. When you’re in love and want to get serious with someone, you care about what they think and begin to make decisions together.

5They’re Always Sneaking Peaks At You 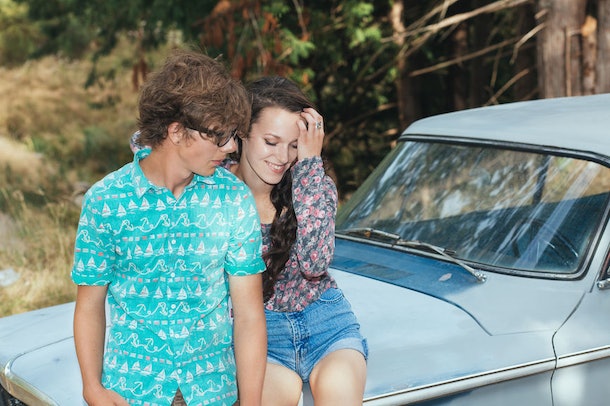 Siegel also says that if "you catch them looking at you often, and they don’t look away," your main squeeze could be falling for you.

This is a small clue that could mean a lot of things, so you shouldn’t necessarily assume someone is in love if they’re always sneaking peaks at you. Maybe they can’t believe their luck, or maybe you’ve got something on your face. Although, if you ask me, true love is telling someone when they have food on their face.

6The Relationship Is More Than Just Sex 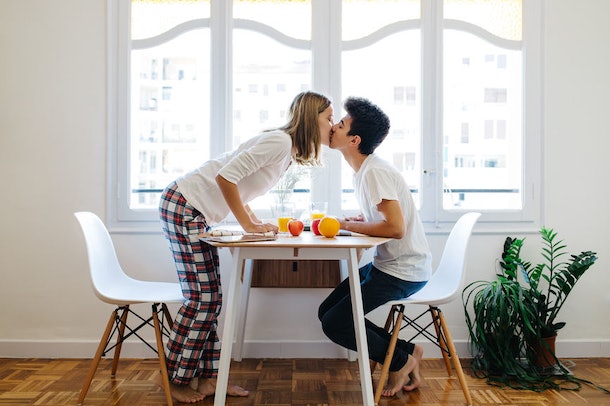 Does a lot of the relationship exist outside the bedroom? If so, it could be a sign of where things are headed. Siegel explains that when two people are in love, "sex is a part of what you enjoy doing together, not just the reason for doing so."

Just because you can’t keep your hands off of each other, that doesn’t mean you aren’t also feeling all the feels. You can definitely be in love and still want to get it on every night, but a major part of a serious relationship is all of the other things you do together. "Perhaps the biggest behavior change is going from wanting to do things to them to wanting to do things with them," he adds.

7They Want To Make Future Plans With You 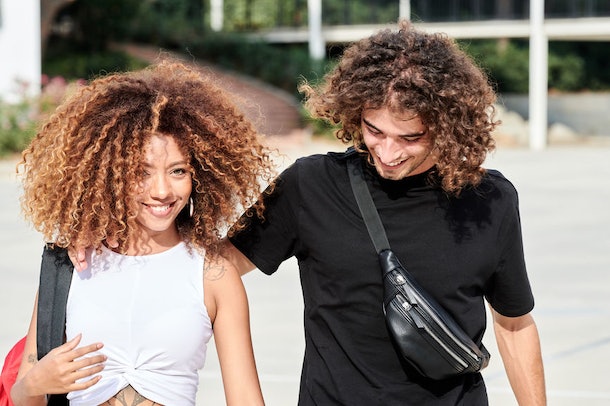 When someone is secretly in love, they’ll want to keep you around and continue doing things with you for a long time. So, if they are "constantly wanting to share experiences with [you] and fantasizing about the future," it’s a good indicator that your partner’s in it for the long haul, says Siegel.

When someone is in love and committed, "they want you to be the best and happiest you. They support your growth, listen to you, nurse you when you’re sick, help you move, and take your side," Gandhi adds. A big part of being in love is enjoying the moment together, but another crucial component is ongoing support and commitment.

Unfortunately, you can’t really know for sure if your partner is secretly in love with you — at least, not until they actually say those three little words. And at that point, I guess it won’t be a secret anymore. But in the early stages of a romance, it can certainly be fun to giggle and squeal with your girlfriends while dissecting your partner’s recent behavior. No shame there!

If you’re really feeling the relationship and can’t stop speculating about whether they’re in love with you or not, think about telling your partner how you feel about them. Scary, I know. But there are no real rules about when to tell someone you’re in love with them or who should say it first. If you can’t keep it in any longer, it might be worth taking a chance — and communicating your thoughts and feelings is always the healthiest course of action in any partnership.

Gandhi concludes that "love is wanting the best for someone else and being there for them through thick and thin." So, if your partner is secretly head over heels for you, you can expect them to stick around well beyond cuffing season.