Recently, as I was rage cleaning our toilet (if you’re not familiar with the term, "rage cleaning" is what you do when your in-laws coming to judge-visit your place and your child’s inability to pee directly into the bowl coincides), my mind wandered to an awkward conversation I’d had at work.

I’d been finishing up in the kind of meeting that should have been an email, when the conversation detoured towards kids and parenting and keeping it all together. A colleague turned to me and said, “Oh, with three kids and your kind of job [accountant], you must be some kind of supermum." 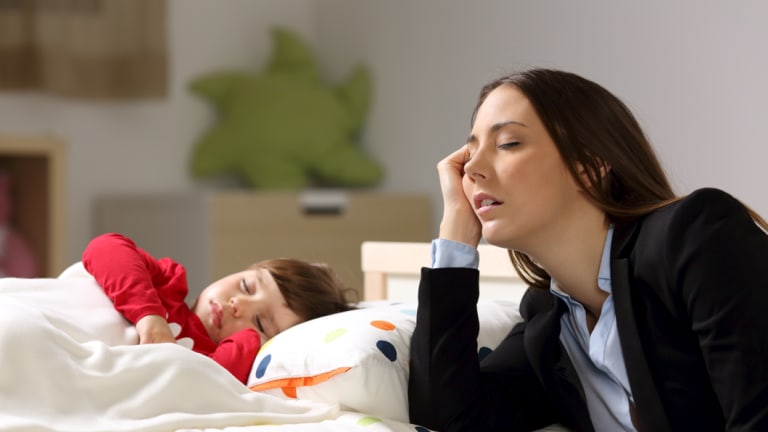 She’s not a ‘supermum’ she is a person keeping it all together, like the rest of us.Credit:Shutterstock

That morning I’d had to leave my 11-year-old at home watching a conspiracy theory documentary about 9/11 and eating crushed taco shells, after missing his first-place run in the 100 metres relay only a week earlier because I’d been caught up in a meeting exactly like this one that should have been a freaking email.

I understand she was just trying to pay me a compliment, and no doubt the perception that I am some kind of “supermum” to her was because I have three children (one with a disability), work full-time, study part-time, and am seemingly able to maintain good relationships.

But here’s the thing *motions for you to come closer* there is no such thing as a supermum. And despite whatever "got it together" vibe I seem to give off, let it be known that for every five things I nail as a parent, there are at least 15 other things at which I fail spectacularly.

So, let’s talk supermums and whether they are some kind of mythical creature or if they really exist.

And exactly when did some higher deity deem mothers to be perfect, anyway? Even the construct that there is such a thing as a supermum makes the experience of parenting much less fun than it can be.

The idea that perfection can be attainable means we beat ourselves up for not being at every excursion, incursion, swimming lesson, athletics carnival, assembly, book week, Mother’s Day stall etc, etc.

It is physically impossible to be at everything. Well, maybe not physically, but mentally. If I never have to sit through another school concert watching other people’s kids quietly forget the words to We are the World it will be too soon. Don’t get me wrong, my kid could be playing a potato in a school play and I’d still want to see them in it. Everyone else's kid? Not so much.

Having an immaculate house is way over-rated, too. That rage cleaning I was talking about above? Yeah, that causes unnecessary stress and resentment. Half the time your kids and partner don’t even know what they’ve done wrong and, because you’ve gone into full martyr mode, they probably never will. A really super idea is making kids get involved in cleaning.

Baking for the class party is another "super" KPI, and, if you’ve got time to stay up until midnight baking 32 red velvet Avengers cupcakes, all power to you. If not, I say grab four packs of Doritos on your way to school and feel safe in the knowledge that you contributed to that class party. And know this – those kids don't care, and will have no memory about who provided the best snacks.

Also, the mythical supermum strives to say "yes" to everything. Bad idea. In the real world, you can say no to your children, to other parental invitations, to work social events, and even to being on the P&C board. If saying yes to something is going to stress you out and interfere in other areas of your life, just don't. You can’t be everything, to everyone, all of the time – one of the most insidious ideas attached to "supermum-dom" is that you should even try. If people don’t understand that, they aren’t your kind of people.

You need to accept that you will not be able to please all relatives all of the time either. You just can’t. I remember once being accused of over-feeding one of my children, according to someone in the extended family. Then under-feeding another. The third one according to this person, I got just right. Apparently I’m Goldilocks.

So why, then, as a parent, do we aspire to be perceived as being so "perfect" and super? Why are we constantly trying to be everything, to everyone? Why can’t we shout to the rooftops about how much it shits us when Oliver refuses to eat his sandwich because it’s been cut into triangles yet he has no problem eating his own snot? Why can’t we admit that, yes, there are times when, despite loving our children fiercely, we don’t particularly like them. Does that make us less of a mum? Or, simply, human?

I think we are all trying to do our best in the circumstances in which we find ourselves. I’d like to think that, if you are teaching your child to be tolerant, fair, loving and have compassion, then that is what makes you super.