Steely Keeley would never have bedded her handsome Bodyguard: JAN MOIR on how the hit BBC drama is beginning to stretch credulity too far

Yes, ma’am. No, ma’am. Permission to unbutton your blouse? Why, wham, bam, thank you ma’am. Don’t mind if I do.

With its charismatic lead actors and sexy scenes, it is no surprise that Bodyguard has been a hit on BBC1.

After all, what’s not to love? Keeley Hawes stars as Julia Montague, a powerful Home Secretary with a nice line in SamCam trousers and withering put-downs.

‘I don’t need you to vote for me, only to protect me,’ she tells her handsome bodyguard-lover David Budd (Richard Madden) shortly before he fails to save her from being blown-up.

Like seven million viewers, I am gripped by this tense six-part drama, which ends in a week’s time. 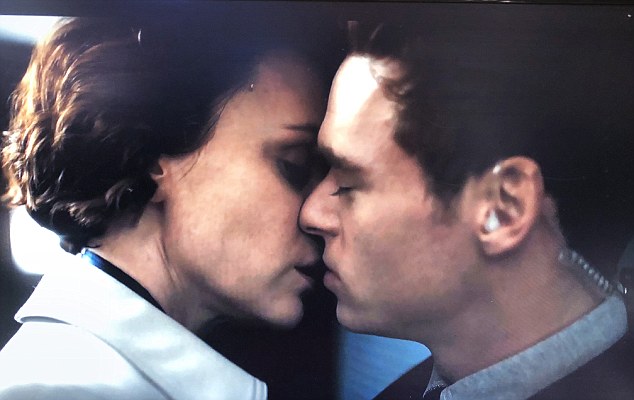 After all, what’s not to love? Keeley Hawes stars as Julia Montague, a powerful Home Secretary with a nice line in SamCam trousers and withering put-downs, writes Jan Moir

Yet here and elsewhere on the small screen, a pesky but dogged insistence by drama-makers on over-egging the politically correct pudding is beginning to stretch credulity too far.

For a start, women characters occupy nearly all positions of authority in Bodyguard.

The Home Secretary? Fair enough, nothing new there. Yet there are also two female police chiefs, a female suicide bomber, a female police operational commander, a police markswoman, a female bomb disposal expert, a female rail manager and a disgruntled female former employee who may be Up To Something.

That might — just! — be fair enough, were it not tacked on to a storyline which suggests it is not Islamist jihadis who are behind the plot to kill the Home Secretary but white, male, middle-class members of the Conservative Party.

Of course they are! What utter b*****ds, as John Major once remarked. They are to blame for everything.

Yet despite all this nonsense, Bodyguard writer Jed Mercurio has still been criticised in some liberal quarters for not being politically correct enough. His apparent crime has been to use so-called ‘Islamophobic stereotypes’ in a key scene that featured the terrified would-be suicide bomber.

Oh, please. It would be idiotic to ignore the fact that the principal terror threat in the UK originates from Islamist sympathisers.

Yet Bodyguard denigrators claim it was wrong to depict Muslims as terrorists — and Muslim women as mere submissive chattels controlled by their husbands, perish the thought.

Sifting through the nail-biting scenes, it is hard to know what offended these critics most — the suggestion of terrorism, or the insinuation that Muslim women were submissive partners who had to obey their men. I hope the she-bomber turns out to be an international criminal mastermind, just to blow their minds.

Political correctness creeps in everywhere. It is the unstoppable floodwater seeping under the door of reason.

No one wants to go back to the bad old days when female characters in police dramas were only good for putting their knickers back on and making Detective Inspector Jack Regan a nice cup of tea. Or when Black, Asian and Minority Ethnic characters were just there to be the butt of the joke in hideous Seventies racist sitcoms. Yet aren’t we in danger of going too far the other way?

Last year, Channel 4 broadcast a drama series called The State, which depicted life for jihadis inside Raqqa in Syria, as they embarked on their bloodthirsty path towards bombings and beheadings. Peter Kosminsky’s four-parter explored the reasons why British citizens went there, and seemed to conclude that they were not cruel or sadistic, just deluded. A comfort, I’m sure, to those whose loved ones have been killed in terrorist atrocities.

And soon we will have Informer, another war-on-terror drama, which starts on BBC1 next month. According to writers Rory Haines and Sohrab Noshirvani, the focus is not on terrorism or radicalisation but on the network of informers used by counter-terrorism police. ‘And we are not necessarily vindicating all the methods [they use],’ said Haines.

No. I bet they are not. While the sensitivities of all others must be treated with meticulous care, the cops who keep us safe from countless terrorist outrages can be portrayed as without morals or qualms, and few will blink an eye.

Still, the drama landscape has its complications, in which individual viewpoints differ depending on what particular hill of partiality you happen to be standing on.

My issue with Bodyguard has nothing to do with the racial or gender stereotypes that may or may not be on display. Neither do I object to the love scenes, although it is distressing — I am sobbing as I write — that so many young male actors such as Richard Madden are now forced to appear naked in a way that has long been familiar to their female co-stars.

However, there is nothing more seductive than a bodyguard in a suit willing to lay down his life for yours. Julia and David even had sex when he was wearing his bulletproof vest, a touch of Kevlar-layered erotica that did not go unnoticed in Proseccoville.

However, my real problem is that a powerful woman like the marvellous Julia Montague would never have risked everything for sex.

Look at her ambition, her steely reserve, how far she travelled in the land of men. Her passion for her protection officer would have undone her, had the forces of darkness not reached her first. And she would have known that.

Mogg and a nasty old fool

The Class War oaf who told Jacob Rees-Mogg’s children that their ‘daddy is a horrible, horrible man’ is a nasty old fool. He is also a plutonium-grade sponger who has contributed nothing but discontent and bile, who has lived on benefits and never had a job in his life. 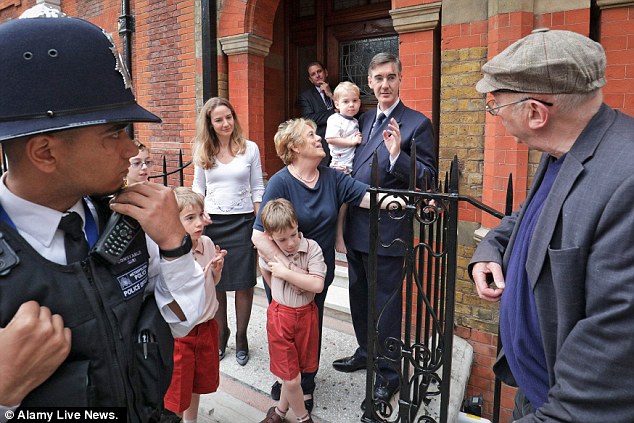 He is also a plutonium-grade sponger who has contributed nothing but discontent and bile, who has lived on benefits and never had a job in his life, writes Jan Moir

Compare him with the sweet little Mogg children, standing there in their darling little red shorts and neatly combed hair, listening politely to the funny man shouting at them. Their excellent manners are a credit to them and their parents. Let’s hope they won’t be scarred by the incident.

PS: The contretemps outside Mogg’s London home was a disagreeable scene — so why didn’t the policeman on duty stop Mr Class War verbally harassing small childen?

Kate Moss has confessed she hated posing topless at the start of her modelling career.

In an American television interview, she says she felt pressurised as a teenager into taking her clothes off — first by photographer Corinne Day and later by Mario Sorrenti, who was her boyfriend at the time.

‘I wouldn’t let my daughter do it,’ she said, referring to her only child, Lila Grace Moss Hack. ‘I look at her now and she’s 15, and to think that I was going topless at her age is crazy.’ 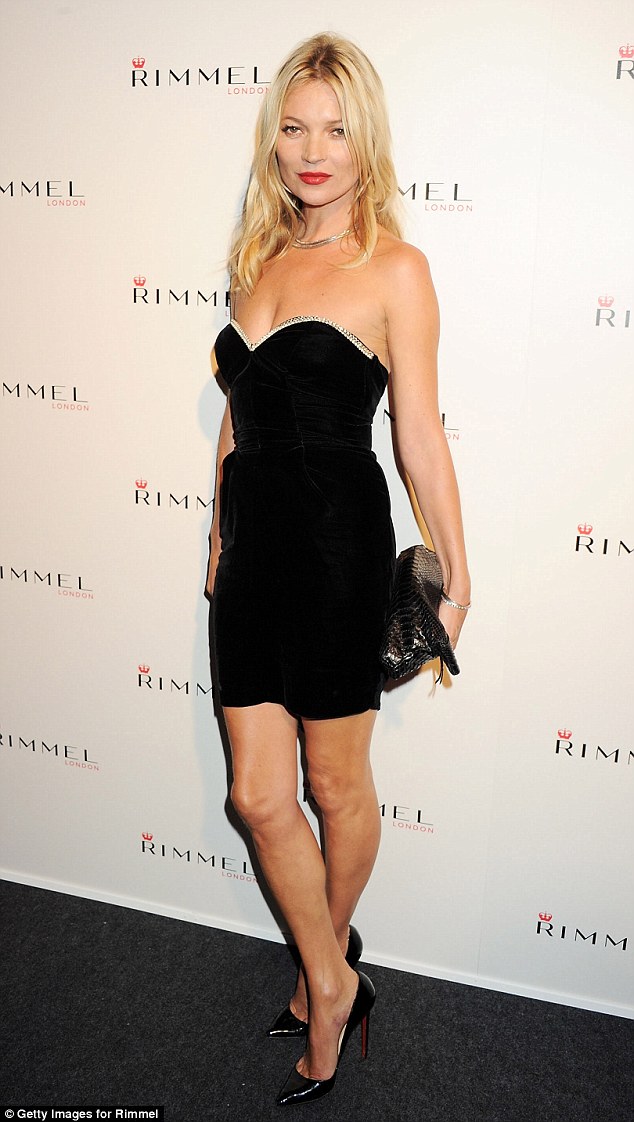 Kate Moss has confessed she hated posing topless at the start of her modelling career, writes Jan Moir

It is more than that — it is shocking, even by lax, arty fashion-world standards. Yet at the time everyone seemed to believe it was fine. What were we all thinking?

Apparently things have improved. Kate claims that young models today ‘don’t have to do it if they don’t want to’. Still, isn’t it a shame they are still being asked?

Girls, the message here from Kate is don’t do as I do, do as I say, wahey!

The wet spring and the long, sunny days of 2018 have meant an increase in mosquito action in the capital. During that last, lovely blast of heat many of us were bitten by the pests, which are more usually found in hotter climes. Certainly, it’s the first time I can recall being bitten by a mozzie in London.

And they aren’t the only critters on the move in this crazy old town.

The hot weather also led to an upsurge in bedbugs, which move around the city on public transport — just like we do! Apparently the fabric-clad seats on buses and Tube trains make a cosy temporary home for the bugs, with a particular concentration running on the west-to-east corridor of the Central Line.

Crikey, I tell a posh friend, I’m never sitting down on a bus again.

She looks at me with unabashed horror. ‘You mean you sit down on public transport?’ she shrieks.

There may be some positives to online crowdfunding, but inciting people to believe in and donate towards quack cancer treatments is not one of them.

Over the past ten years, more than £8 million has been donated through sites such as Go Fund Me and JustGiving — always for treatments that involve alternative health elements.

Most of the money goes to clinics in Germany, Mexico and the U.S. A few of the treatments they offer are experimental but credible, yet most are little more than costly wishful thinking.

It is wicked to prey on the ill, raising their hopes at the most vulnerable moment of their lives, then encouraging desperate friends and relatives to stump up. The sad truth is that little good comes of it — unless you happen to be on the receiving end of the cash.

Everybody, including moi, says it every single blessed year. That’s no reason not to say it again. Gather round people. Listen up. It is not even the end of September but Christmas displays are already silting up High Street stores.

I think I saw some holly wrapping paper in Marks & Spencer this week. Gah! Was that a chocolate snowman in Waitrose? Come on. It is far, far too soon. Dragging out the festive season for three months just spoils things for everyone. So please, Santa, make it stop. Just for me.