There have been touching tributes from Prince Charles, tears from the Countess of Wessex, rosy family photographs from the Duchess of Cambridge, St Fergie of Condolence nipping over to comfort the Queen.

We had Prince Andrew sidling in from stage right, hoping everyone will forget the embarrassments of the recent past; Princess Anne paying tribute to her ‘teacher, supporter and critic’ and Princess Eugenie rather patronisingly promising to ‘look after Granny’ — while 94-year-old Granny was already out there, having returned to royal duties four days after the death of her husband.

As Prince Philip lies in rest at Windsor Castle, his nearest and dearest are preparing themselves for his funeral tomorrow as only they know how. Yet nestled among the tea and the nation’s sympathies has been an unedifying row over who will and who won’t be allowed to wear military uniform to the service.

First, Prince Harry is not entitled to wear a dress uniform, after stepping down from royal duties in January 2020. Adding to the mess is Andrew, who wanted to go as a full admiral — naval officer, not butterfly. But that might not be entirely appropriate, given the Jeffrey Epstein allegations that, although consistently denied, forced his withdrawal from public life. 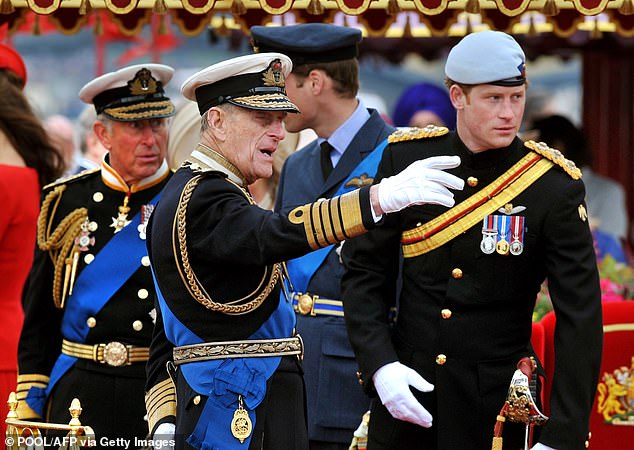 As Prince Philip lies in rest at Windsor Castle, his nearest and dearest are preparing themselves for his funeral. Pictured: Charles, Philip, William and Harry

On a human level, one might have hoped these two ex-military men should be able to wear what they want to honour their grandfather and father. Yet to save the blushes of all, especially Harry, the Queen has ruled that senior royals will wear morning dress instead. No!

For what is the point of the Royal Family if not to be medalled and beribboned, striding about at some great event with ceremonial swords at their hips and plumes of ostrich feathers a-billow in their silly hats? We need them in medieval velvet capes, we want to see them groan under the weight of flashing epaulettes and grids of gold buttons visible from the cheap seats.

What we need, above all, is the circumstance of pomp. And such gilded signifiers of rank and status are terribly important, for what are the Windsors without them? Just another bunch of no-talents with an ancestor, as Kathy Burke might say. Those who believe that all formality is a front, and that the only point of a royal veneer is that it should crack — well, this is their moment. 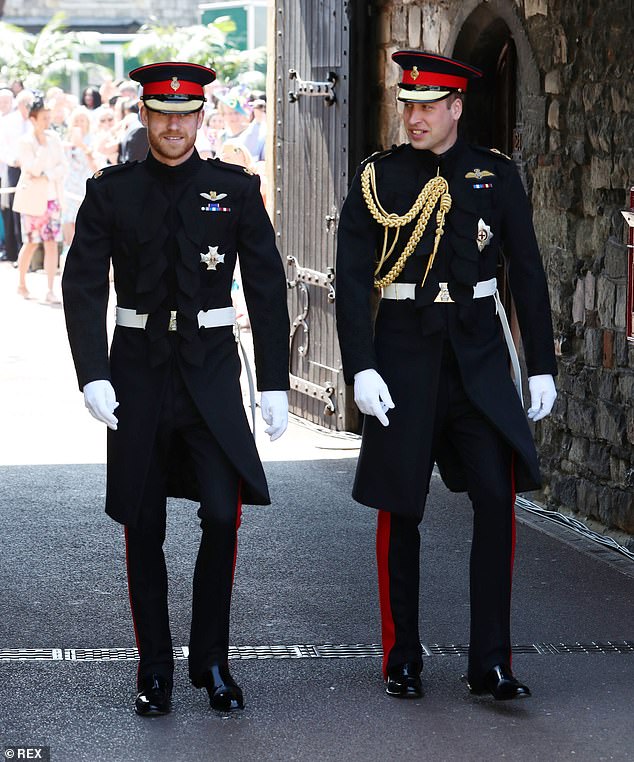 One can see why HM has made this decision, because the potential for embarrassment is profound. Picture Charles with his overhang of medals, none of them for valour in combat, wreathed in a sadness that seems to have aged him immeasurably in the space of a week.

Next to him is William, roped in gold braid and cold fury. Andrew hides behind a pillar, anxiously counting the rows of frogging on his sleeves. And then comes the treacherous Harry, humiliated in the sackcloth of an ordinary suit and his terrible socks; a Coriolanus thrust into the marketplace to show his wounds.

Some might say it is no more than he deserves, and they have a point. Yet this decision to have a mufti funeral might well go down in history as another turning point in the Royal Family fortunes. And that turn will be a downward one: a lurch onto the thinning ice of the empire as the ragbag of headstrong younger royals skate ever faster towards the igloo of irrelevance.

This kind of capitulation makes the Windsors seem porous and vulnerable, under siege from the wrecking ball of the Sussexes and the creeping predications of the woke mob. 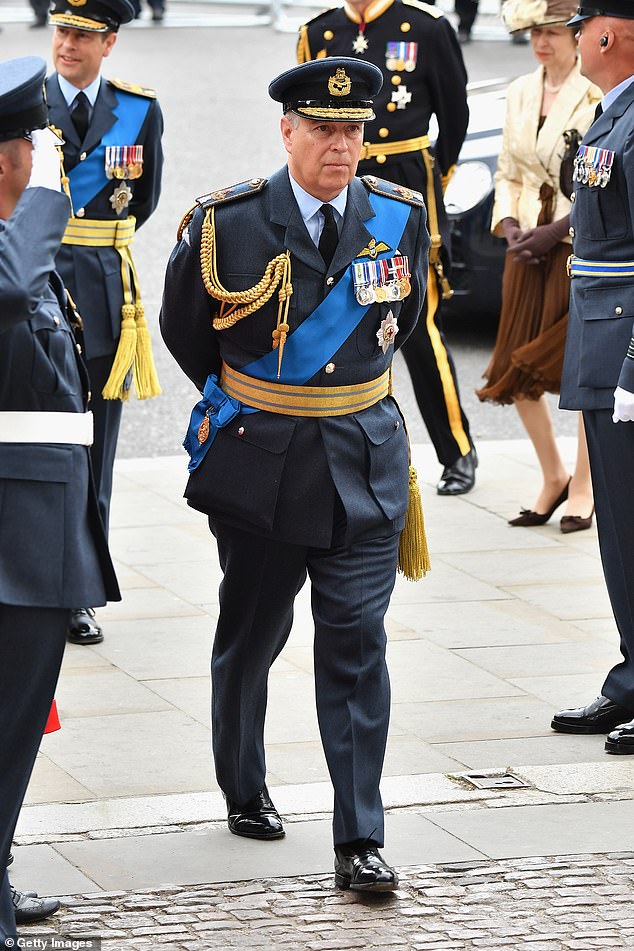 Whether the princes are in morning suits or military uniforms or dressed as penguins, nothing can fill the fissure of discord at the heart of this sad day. Pictured: Prince Andrew

Of course, this is the absolute last thing the Queen needs right now. But funerals, like weddings, tend to expose family tensions. Behind this carefully planned event one can sense the jostle for status and positioning, the weight of secret showdowns and overruled requests — and not just among the men. Prince Philip’s close confidante Lady Romsey will be there tomorrow but there is still no place for Sarah, Duchess of York. She remains unforgiven, a pariah, even after a death. This seems incredibly harsh, considering that Prince Andrew has done more to embarrass himself and the Royal Family than she ever did.

However, the show must go on and the Windsors will once more display to the world their collective gift for impassive ceremony, despite the churning human emotions that lie beneath.

And tomorrow, the primed canvas awaits. Yet whether the princes are in morning suits or military uniforms or dressed as penguins, nothing can fill the fissure of discord at the heart of this sad day, and the fact that two brothers who were once close cannot even walk together behind their grandfather’s coffin.

All this in a family ceremony rinsed of pageantry and personal signifiers of extraordinary and unique status?

Perhaps Harry and Meghan will see this banishment of military uniforms — this willingness to bend tradition to save face and keep Harry happy at all costs — as a personal triumph. Their modern will, their wish to be their authentic selves, conquered the stuffy rules of the Palace.

Only in years to come will the Windsors perhaps realise that, in a way, they were watching their own funeral, too.

Britain’s most expensive flat is on sale for £175 million. Overlooking Harrods in Central London, the 18,000 sq ft duplex penthouse at One Hyde Park has a private spa, cinema, cocktail bar and five ‘luxury’ bedrooms.

How on earth can they justify the price? It has to be a joke. It is owned by Nick Candy, who presumably lived there at one point with his wife, Holly Valance. Can the couple have enjoyed inhabiting such a soulless, taste-free zone; all sharp edges, ghastly fittings and hotel lobby vibes?

Gary Hersham, of estate agency Beauchamp Estates, which is selling the property, says One Hyde Park is ‘probably the finest building’ in England. I think we can all agree it probably is not. I pass it on the bus often, and can report it has all the allure of a municipal block in downtown Dubai. And surely buyers want more for their money than a pathetic ‘cocktail bar’. 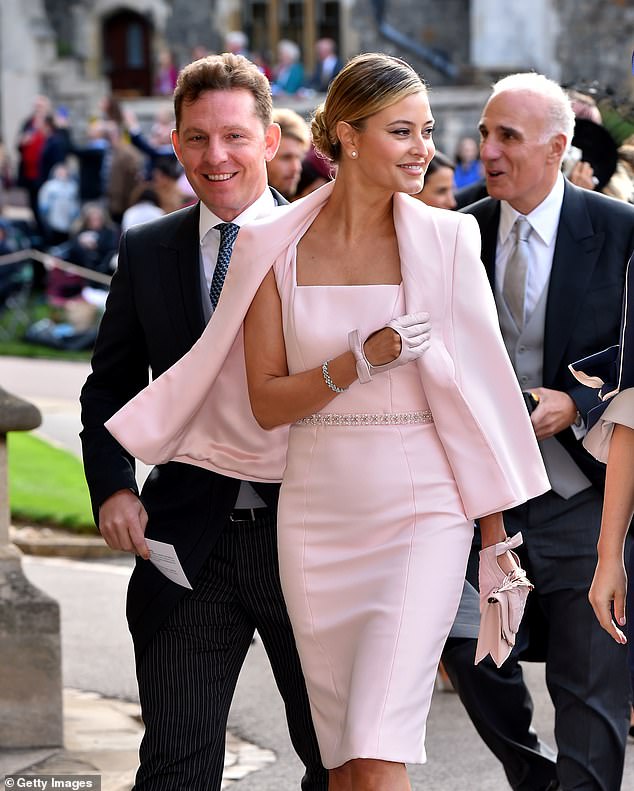 The flat is owned by Nick Candy, who presumably lived there at one point with his wife, Holly Valance (pictured together)

One of my favourite pastimes is perusing the websites of high-end estate agents in California, where properties come equipped with everything to tempt the super-rich. It’s gasping!

I’ve said it before, I’ll say it again. Repeat after me. A staycation is when you stay at home.

A holiday is when you go on holiday. Even when you take a holiday in the country you live in, it is still a holiday, it is not a staycation. Thank you.

How DID Gregg the Egg get the gig?

This year’s MasterChef was won by charming Tom Rhodes, who reverse-seared his steak, deep-fried an oyster and did something unspeakable with liquorice.

He also did all his learning from cookbooks and you can sort of tell.

According to the judges, Tom’s stand-out dish was olive-oil ice cream, garnished with pepper and salt. 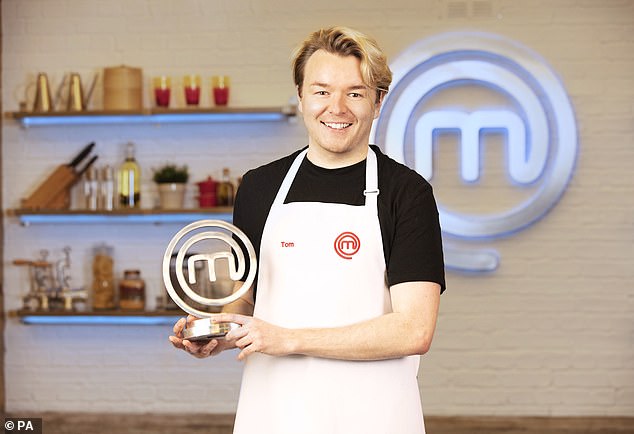 This year’s MasterChef was won by charming Tom Rhodes (pictured), who reverse-seared his steak, deep-fried an oyster and did something unspeakable with liquorice

‘You start off with sweet, creamy ice cream and you end up with peppery olive oil and a little bit of salt,’ he said. ‘It is playing with me in a really delightful, delicious way.’

Well, that is a ghastly thought, isn’t it?

Let’s quickly move on. The amazing thing about MasterChef is that it survives despite everything.

Despite so many of the dishes being a pastiche of the worst kind of fine dining restaurant cooking.

Despite so many of the cooks being terrible cooks.

But mostly despite Gregg the Egg being totally unable to explain how something tastes and why it is good or bad.

How on earth did he get that job? It’s almost as mysterious as Tom’s ice cream.

The callous treatment of Callas

Maria Callas’s biography details her rather brutish life; her nasty parents and her nasty Onassis lover were all nasty to her.

Onassis spent almost a decade with the greatest soprano who ever lived — but he never appreciated her voice and would slip away from her concerts, which he found boring. Poor Maria.

She was still spirited enough to put down her great soprano rival Renata Tebaldi — Callas compared their voices as being like ‘champagne and Coca-Cola’. That is rather cruel, but it is also true. 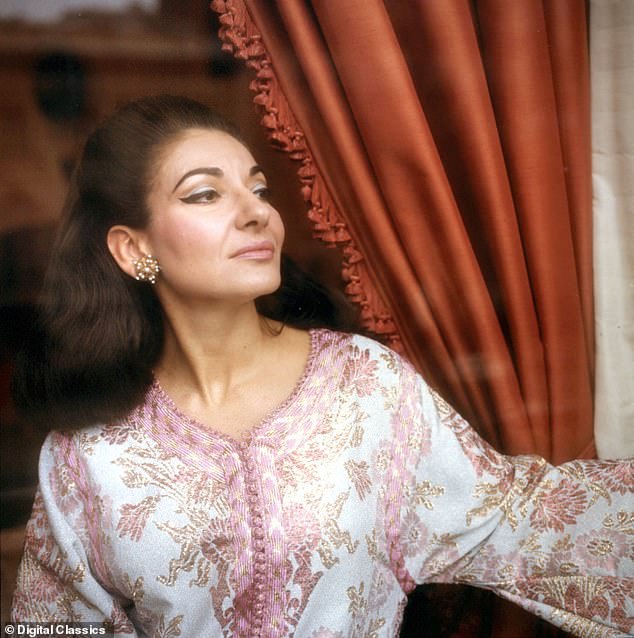 Maria Callas’s (pictured) biography details her rather brutish life; her nasty parents and her nasty Onassis lover were all nasty to her

I got my hair cut on Wednesday, what joy. I’ve always loved salon appointments, but now it seems like an impossible luxury. To be back in a Daniel Galvin salon, with Cheryl wielding the scissors and many months of lockdown madness being shorn off? Bliss.

However, I almost miss the mess. One good thing about lockdown was that expectations were so low in so many ways, certainly when it came to appearances. I liked our shaggy office camaraderie, with usually bandbox-smart journalists looking unkempt, hairy and a little bit wild. Some of us were out and proud with exposed roots, others looked like coconuts, shaven headed criminals or members of The Sweet pop group. I even wore my jeans to work, unheard of in Daily Mail towers!

Now the curse of smart has returned and there is no escape. The men have reverted to short back and sides, the women no longer look like Tina Turner and I have bought a hand-held steamer to iron my blouses. To be honest, I’m a little bit sad to leave the hairy monster days behind, but onwards we must go.

Line Of Duty can no longer be cool — for Keir Starmer has declared himself a fan.

In an awkward bid for popularity and voter connection at PMQs this week, the Opposition leader used the popular BBC drama as a reference point when talking about government sleaze.

‘I think that AC-12 are needed to get to the bottom of this one,’ he said in a direct reference to the anti-corruption unit in the show. 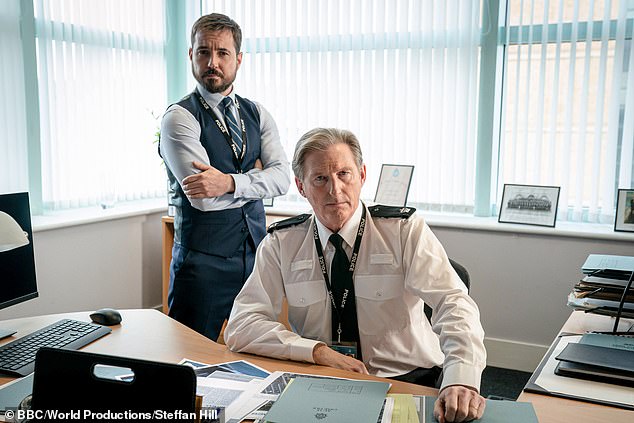 Line Of Duty can no longer be cool — for Keir Starmer has declared himself a fan. Pictured: DS Steve Arnott and Superintendent Ted Hastings

‘We are getting on with rooting out bent coppers,’ he added.

Mother of Cod(swallop)! Please don’t drag my darling Ted Hastings into the House of Commons.

It would be the final blow for the beleaguered gaffer. Ma’am will suffice, Sir Keir. As you were.