Do you know what’s better than chocolate bunnies? Chocolate bunny-flavored ice cream. Yes, it exists, and you can try it in time for Easter. The sweet seasonal scoop was created by Jeni’s Splendid Ice Creams, an ice cream company dedicated to serving up an array of delicious flavors on the reg. Jeni’s Splended Ice Creams’ Chocolate Bunny flavor is a festive addition to the shop’s lineup, and it’ll have you reaching for a spoon. It doesn’t only taste like chocolate bunnies, though. Once you learn more about the flavor, you’ll be craving dessert.

Jeni’s new Chocolate Bunny ice cream flavor — which was officially launched on April 11 — was inspired by various Easter candies that you know and love. In addition to its iconic chocolate bunny taste, the selection mimics the flavors of Peeps marshmallows and "cream-filled eggs," according to a press release. With that being said, you can expect the sweet flavors of your go-to springtime candies with each and every scoop.

As you could imagine, a lot goes into making a flavor that delicious — and the process behind creating Jeni’s’ Chocolate Bunny ice cream will make your mouth water. Heck, it might even have you asking the Easter Bunny for ice cream instead of candy this year. 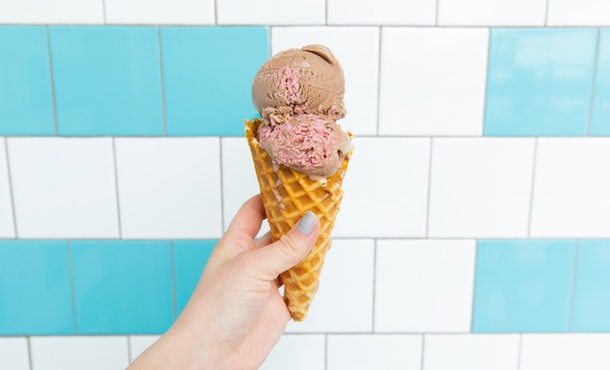 According to Jeni’s, the Chocolate Bunny selection is made with a "lighter" version of its Milkiest Chocolate ice cream (apparently, it tastes just like a chocolate bar). That, my friends, is where the "chocolate bunny" flavor comes in. To mimic the flavors of Peeps and cream-filled eggs, the company adds a natural marshmallow essence and a vanilla essence. Between those three flavors (chocolate, marshmallow, and vanilla), you’ll taste your favorite candies with every scoop.

That’s not where the festive flavors end, though. According to Jeni’s, the ice cream is also mixed with white chocolate curls that are dyed pink (thanks to beets). Apparently, those curls were inspired by the decorative grass that’s used to fill Easter baskets every year. Therefore, in addition to candy-inspired flavors, the ice cream features a festive look that’s reminiscent of popular Easter decor.

What more can you ask of Chocolate Bunny ice cream?

Like biting the head off a chocolate bunny. Chocolate Bunny ice cream, made for kids (and kids at heart). Milk chocolate ice cream with hints of vanilla and marshmallow, plus pink white chocolate curls. Out now only in shops for a very limited time! ??

If you’re hopping (er, I mean, hoping) to give Jeni’s’ Chocolate Bunny ice cream a try, you’ll have to look beyond the freezer aisle of your grocery store. According to the company, the seasonal flavor is only being sold in Jeni’s Scoop Shops. With that being said, you’ll need to seek out your nearest Jeni’s Splendid Ice Creams store. In order to do so, head to the company’s website. Once you’re there, look at the top of the page and hit "Scoop Shops." There, you’ll see a list of cities that feature a Jeni’s location. If you seen one that’s close to your hometown (or in your hometown), go ahead and plan your trip.

Either way, I’d book your trip sooner than later. The Chocolate Bunny ice cream flavor will only be around for a limited time, so try it while you can this spring. If you’d rather order ice cream from the comfort of your home, you can always opt for Jeni’s’ Spring Collection, which features delicious flavors like Strawberry Buttermilk and Brambleberry Crisp.