Among the several celebrities that I choose to follow in my spare time (namely the Kardashian-Jenners, the Biebers, and, of course, John Legend and Chrissy Teigen), I have to say that Legend and Teigen definitely manage to come through with the most wholesome news updates. John Legend and Chrissy Teigen’s birthday celebration for Luna, for example, took place at Disneyland this past weekend, and it looked like a total blast. In all honesty I’m kind of salty I wasn’t invited… but I guess it’s fine.

On Sunday, April 14, John Legend and Chrissy Teigen’s oldest daughter, Luna Stephens, turned 3 years old — and let me tell you — her birthday festivities looked like quite a time to be had. A day earlier, the family of four (Miles, their 10-month-old baby was in attendance as well!) went on a vacation to none other than Disneyland in Anaheim, California, according to E! News. And based on how they spent their afternoon, it looked like they had the time of their lives.

As you would imagine, Luna’s birthday celebration was no run-of-the-mill child birthday party. According to People, Legend, Teigen, Miles, and Luna started out at Bibbidi Bobbidi Boutique surrounded by friends and family, where the birthday girl received a special princess makeover. After making her feel like true royalty, they headed over to Disney Princess Breakfast Adventures for a three-course brunch, to dine alongside Tiana, Jasmine, Aurora, Ariel, Belle and Pocahontas. For real — Luna fulfilled my #BirthdayPrincessGoals. 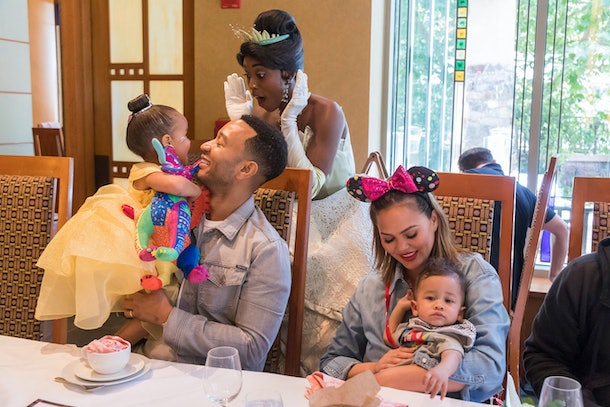 After finishing up at brunch, according to People, Luna and the fam headed over to the rest of the park, to hang with Belle and Pocahontas, and to see Mickey’s Soundsational Parade. Oh, and most importantly, Legend fulfilled his dreams of being featured on @dilfs_of_disneyland. It took a little bit of time and effort, but in the end, he came out victorious.

According to People, Legend posted a few pictures to Instagram campaigning to become a Disneyland DILF. The first picture featured the the "All Of Me" singer holding Luna on his shoulders alongside longtime friend Mike Rosenthal, who was holding Miles. It was honestly so cute, and the caption he wrote was seriously hilarious.

In the first Instagram photo, Legend’s caption read: "@mrmikerosenthal and I are submitting this to @dilfs_of_disneyland." Legend followed up the first ‘Gram with yet another adorable photo that showed him pushing Luna in a stroller. The caption read:

This is my last, desperate attempt. Your move, @dilfs_of_disneyland

After posting both photos online and probably making a wish on a shooting star, both pictures eventually made it to the adorable dad-stagram. Without a doubt, it was well-deserved. I’m sure Legend made sure to give thanks to Chrissy, birthday girl Luna, and Miles for helping him achieve this high honor. I mean, without them, he’s just an "ILF of Disneyland," right?

Oh man, I wish my birthday was as magical as Luna’s, because she looked like a magical birthday princess. It would be a total dream to celebrate my 25th at Disneyland, surrounded by various princesses, my cooking inspiration and humor guru, Chrissy Teigen, and — of course — my number one celeb crush, John Legend. In all seriousness, though, I’m thrilled Luna’s celebration was magical… and most importantly, that Legend officially became Disneyland’s most iconic DILF.