A man who shot dead a rival who had called him a "putrid dog" in a Facebook fight has been jailed for a decade.

Weeks of hostility and a war of words between Joshua DiPietro and Craig Williams erupted on Father's Day 2017 when Williams fired a .22 rifle into a four-wheel-drive and hit Mr DiPietro. 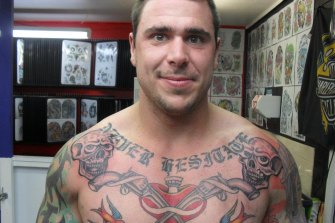 Joshua DiPietro had a violent reputation.

The shot caused Mr DiPietro a catastrophic head injury and he died in hospital hours later.

Williams, 33, on Friday was jailed for 10 years after pleading guilty to manslaughter over the shooting outside his mother's home in Rosebud.

His half-brother, John Godfrey, was jailed for seven years for his role as he stood with an armed handgun, but did not fire, after Mr DiPietro and three friends arrived at the house in a Mitsubishi Pajero.

In the weeks before, Godfrey had bad-mouthed Mr DiPietro, the Supreme Court heard, and assaulted one of his friends. As the ill-feeling continued between the two groups, Mr DiPietro called Williams a "putrid dog" in a Facebook conversation.

Mr DiPietro, 31, spent Father's Day with his parents but that night called Williams and told him, "I am coming around, you're going to get shot. I'm going to shoot you."

Williams replied, "Bring it on. Come around."

Police are satisfied Mr DiPietro and his friends had only cut-down golf clubs when they are arrived at the Ocean Street house, and retreated when they saw Williams and Godfrey had guns.

"Put that away, don't be silly," Mr DiPietro told Williams. He then told his friends, "Come on, let's go. We don't want any trouble."

But Williams fired the fatal shot and continued firing as the Pajero sped away. One shot narrowly missed the two men in the back seat.

Justice Lex Lasry acknowledged Mr DiPietro had a violent reputation and Williams and Godfrey were frightened, but found the half-brothers fuelled the aggression and were armed.

Justice Lasry found Williams wanted to harm the men, but did not intend to kill, when he fired into the four-wheel-drive in what was more than an intimidatory act. Firing from close range carried a high element of danger, he said.

"By your words and actions you both forgot you weren't living in a television crime drama … in the real world, gun violence kills people," the judge told the pair.

After the shooting, Williams had his mother, Tracey Godfrey, destroy any CCTV footage, and he and John Godfrey disposed of the guns.

Williams was arrested two days later after a 10-hour siege at the house during which he admitted to a police negotiator he killed Mr DiPietro. 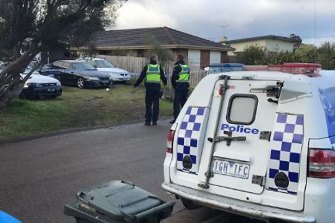 Police at the scene of the Rosebud siege.Credit:Twitter/@NearyTy_9

Williams, who has a long history of prior convictions for violence, drugs and weapons offences and a longer history of drug abuse, also pleaded guilty to reckless conduct endangering life. He must serve seven years before he is eligible for parole.

Godfrey, 27, was found to be complicit in the death and pleaded guilty to manslaughter. He must serve four years before parole.

He fled to Sydney after the shooting and was arrested six months later.

Tracey Godfrey was this year convicted of assisting an offender but was spared jail.

Her former partner, David Lyons – John Godfrey's father – was last year jailed for 2½ years for assisting an offender and intimidating a witness.