The 24-year-old singer took to Instagram on Friday to let his social media followers know what he really thinks of his leading lady. After the 21-year-old model posted a picture of herself donning a black winter coat and pants, Bieber commented, “Ur just too much” and “U turn me on.”

This wasn’t the first time the “Sorry” singer had showed some PDA online. At the end of October, Baldwin shared a picture of herself modeling a sparkly, silver number for a PrettyLittleThings campaign. Once again, Bieber didn’t shy away from letting the world know his true feelings.

“Holy crap this is hot,” he wrote.

He also hasn’t been afraid to share his nicknames for his sweetheart. Earlier this month, Bieber posted a black and white snapshot of the couple kissing on Instagram and captioned it “hunny buns punkin.” He also posted another photo of the two lovebirds cuddling by the water and captioned it, “my little bean.” 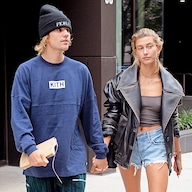 One of his most telling PDA-packed posts appeared last week. The “Love Yourself” star posted a picture of him holding hands with Baldwin and captioned it, “my wife is awesome”—seemingly confirming the two had indeed tied the knot this fall.

Baldwin also appeared to make her newlywed status Instagram official this weekend by changing her Instagram handle and taking Bieber’s last name. In addition, she proudly donned his moniker on the back of her jacket last week.