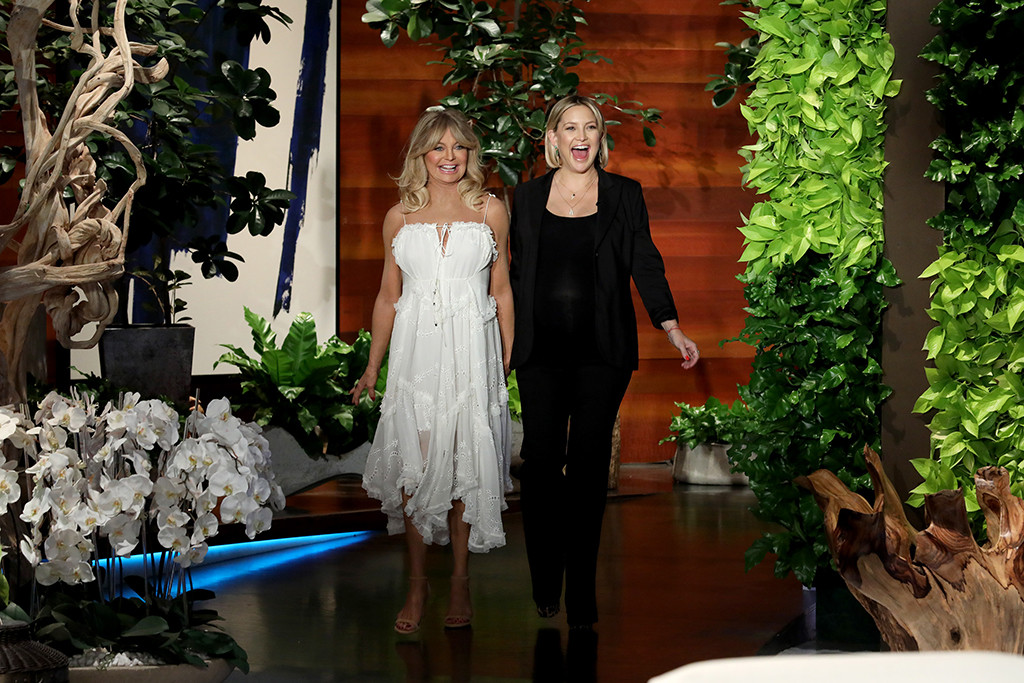 Kate Hudson is in the final stretch.

The actress joined mom Goldie Hawn for their first joint television interview on The Ellen DeGeneres Show today, where she talked about Baby No. 3. “Let’s just say you’ve probably never had anyone this pregnant on your show,” she told Ellen DeGeneres. The host said she looked due “any minute,” to which Hudson replied, “It could be! Water could go any second!”

Always prepared, DeGeneres brought out some props, joking, “I have tongs, I have mitts…”

“This looks like my mom at the last birth,” Hudson said. “I’m surprised you didn’t have these.”

Hawn, who brought pizza and Doritos into the delivery room last time, is excited to be welcoming her sixth grandchild. But with Bellamy, she said, “I should have been more mindful. I thought that the last baby was going to be a girl so much that I knit a pink blanket. When I saw his penis coming out, I [changed] focus to the pink blanket and I thought, ‘Boy, did I screw up!'” To her credit, Hudson reminded her famous mom, “You very quickly then knit a white blanket.” 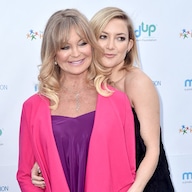 Hudson also told DeGeneres the “best part” of giving birth to her second son “was when mom called me when I was in labor and said, ‘So, I’m about to take a swim and I was going to get a massage. How long do you think you’re going to be in labor?’ I was like, ‘I don’t know, mom!’ I’m calling the nurse going, ‘Do you know how long I would be laboring? Mom wants to swim.'”

Hudson is currently expecting a baby girl with boyfriend Danny Fujikawa, who will join big brothers Ryder Robinson, 14, and Bellamy, 7. “I had to be prepared if it was another boy—which I would have been really happy with, obviously. You know, I just needed to know,” she said. They have a “couple” of name ideas, but they are “going to decide when the day comes.” The Fabletics founder added that her sons are “so excited” to have a sister on the way.

Bellamy weighed 7 lbs., 12. oz. when he was born, and her daughter is already “pretty big,” Hudson said. “It’s crazy,” Hawn said. “You can’t believe that our stomachs stretch that much!”

Speaking of magnolias, that reminded Hawn of something. “By the way, I planted a magnolia tree in the front yard, so you might get another one,” she told her daughter, who just laughed.

Later in the episode, the mother-daughter duo answered DeGeneres’ burning questions, sharing the most rebellious thing they did as teens and whether they’ve ever worn handcuffs. For the last question, they were asked to share the “hardest thing to do when you’re pregnant.”

“I never found that,” Hawn said, interrupting her and eliciting laughs from the audience.

After she stopped giggling, Hudson continued, “And this one, walking. Walking is actually hard.”