Time for new family photos? Kate and William send out thank you cards with an old picture of Princess Charlotte – after using the same portrait two years in a row for their own missives

Royal fans who sent good wishes to Princess Charlotte on her third birthday were no doubt delighted to receive a thank you card from the Duke and Duchess of Cambridge.

But if they were hoping to see a new image of the little Princess on the front they were left disappointed as Kate and William opted for an old portrait of their daughter on her first day of nursery.

The card, which was shared to Instagram by a royal fan, features a picture taken at Kensington Palace, released in January this year as Charlotte set off for the Willcocks Nursery School in London.

A snap of the card was shared on Instagram by ‘The Duke and Duchess of Cambridge thank you for so kindly writing as you did to Princess Charlotte on the occasion of her third birthday.

‘This was most thoughtful of you, and greatly appreciated by Their Royal Highnesses who send you their best wishes.’

The card has emerged just a day after it was revealed that Kate and William used the same portrait two years running on a card sent to people who wished them well on their wedding anniversary. 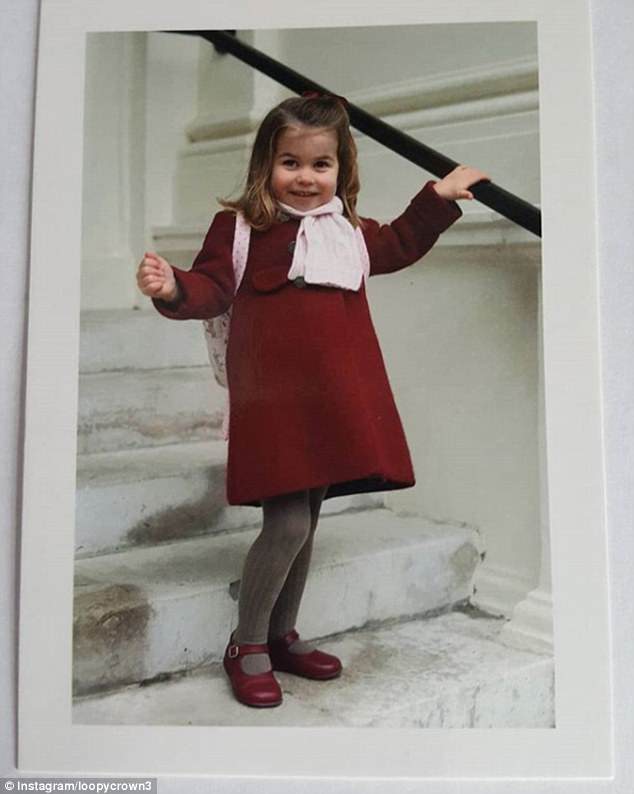 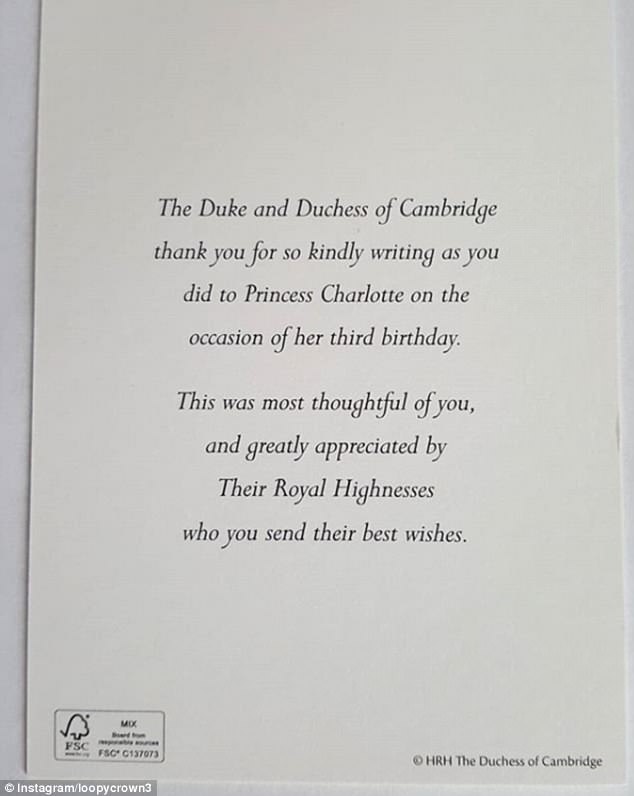 The Duke and Duchess thanked royal fans for writing to Charlotte for her birthday, and sent their best wishes in return

As is custom William and Kate sent thank you notes to everyone who had been kind enough to send their best wishes on their seventh wedding anniversary on April 29, 2018.

Fronting the card was a photo of the couple during their India and Bhutan tour in 2016 – exactly the same image the palace used last year.

In the photo the Duke and Duchess are seen smiling before the camera during their Himalayan trek to Bhutan’s Tiger Nest monastery.

Photos of the card were shared by royal fan Jessica, 22, from Italy on her Instagram account Royal Addicted 2, which boasts over 200,000 followers. 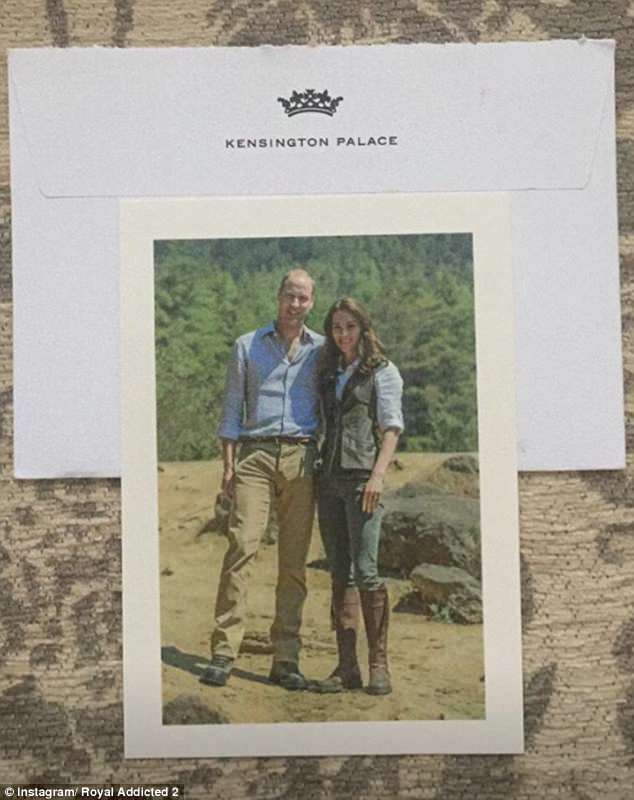 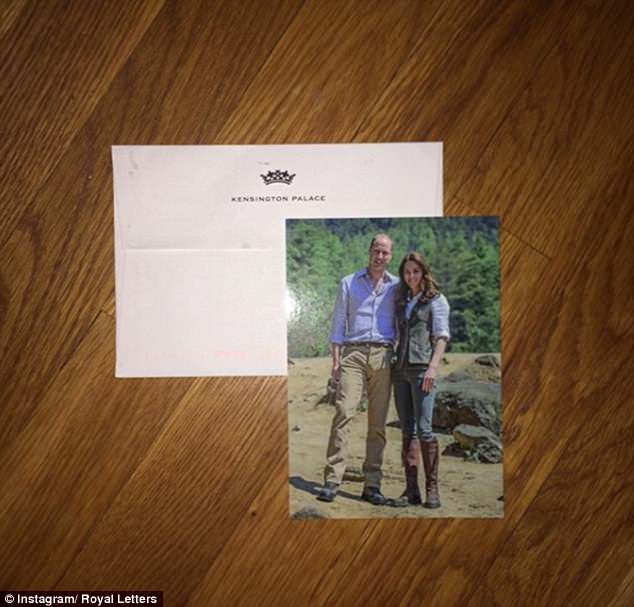 The note on the card, which remains the same for all recipients, reads: ‘The Duke and Duchess of Cambridge thank you for the thoughtful message you so kindly sent on the occasion of their 7th wedding anniversary.

‘It was really thoughtful of you. Their royal highnesses send you their warmest thanks and very best wishes.’

Both the image and the message, aside from the year of the anniversary, are identical to last year’s thank you cards.

Last year’s card was shared on a regular well-wisher’s Instagram account Royal Letters with only difference being the absence of a cream border. 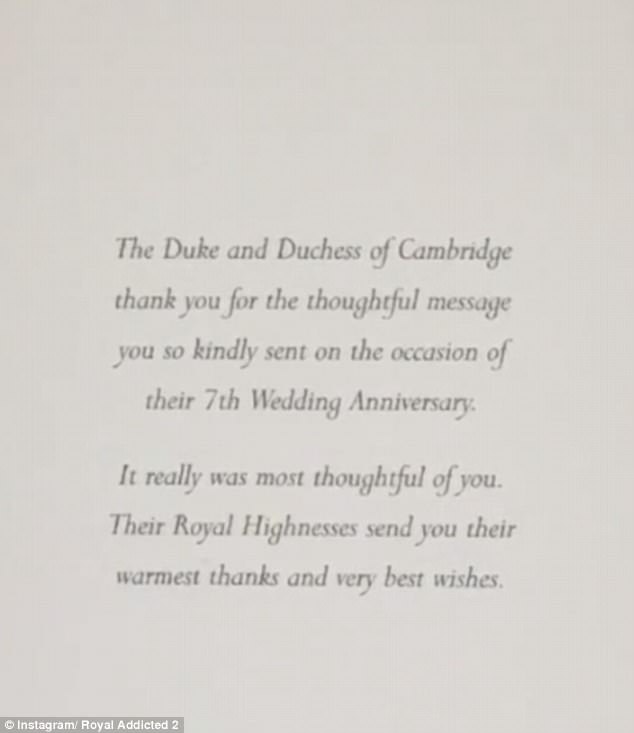 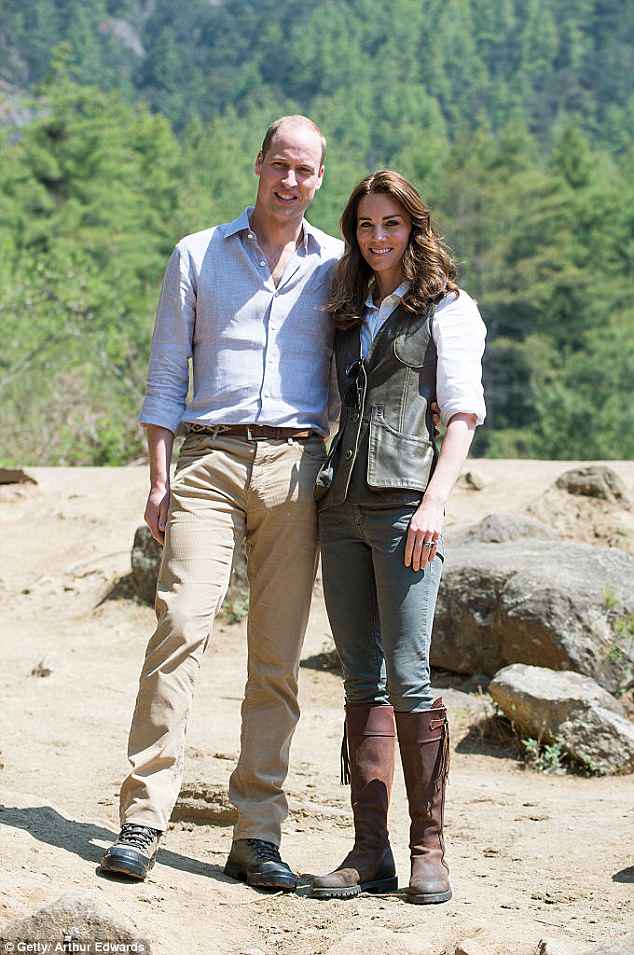 The couple chose to use the very same portrait on the front of the card as they had last year, seeing them posing on a Himalayan trek in 2016

The MailOnline has contacted Kensington Palace for a comment.

The couple have previously been criticised for sending out identical messages of thanks on every occasion.

While nobody expects a personalised response, the royal couple can’t seem to come up with a different message for each new batch of cards.

Not only do they send the same ‘warmest thanks and best wishes’ time after time, but the message on their cards is identical to that used by Prince Charles and Camilla.

The faux pas was revealed by an Instagram account Royal Letters, which shows that Kate and William have sent out the same response on no fewer than four separate occasions.

It seems that the Duke and Duchess of Cambridge are still yet to broaden their vernacular as they are still sending their ‘warmest thanks’ and ‘best wishes’.

WHEN TO SEND A THANK YOU NOTE: OUR EXPERT WEIGHS IN

Etiquette expert William Hanson explained thank you letters still carry ‘much social clout’, even in an age dominated by texts, tweets and emails.

He added: ‘Thank you letters should be sent after someone has received a present or hospitality.

‘The general rule is one side of correspondence paper for a present or dinner, and two sides for a weekend stay.

‘Outside of royal circles, they need to be in the post within 36 hours of receiving the hospitality or 5 days after receiving the present.’