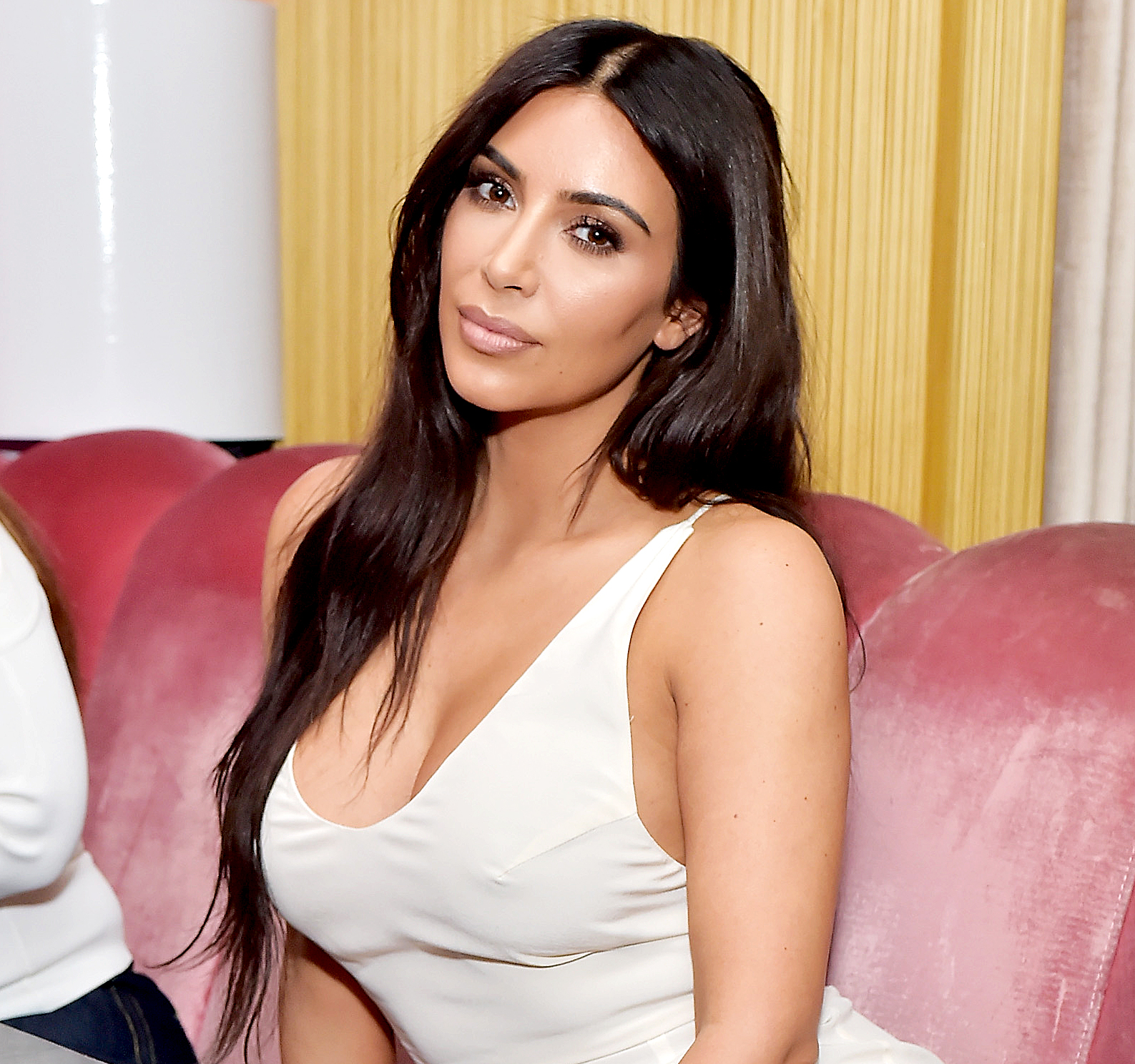 UPDATE: After teasing the world by posting a series of very intimate nude photos of her famous physique to her Instagram feed earlier this week, Kim Kardashian finally gave Us a look at her KKW Body fragrance bottle. The beauty mogul unveiled the scent on her Instagram Story on Wednesday, April 25, and, as she promised, the “golden” smelling scent will come in a bust-like flacon that was quite literally molded after her own body. 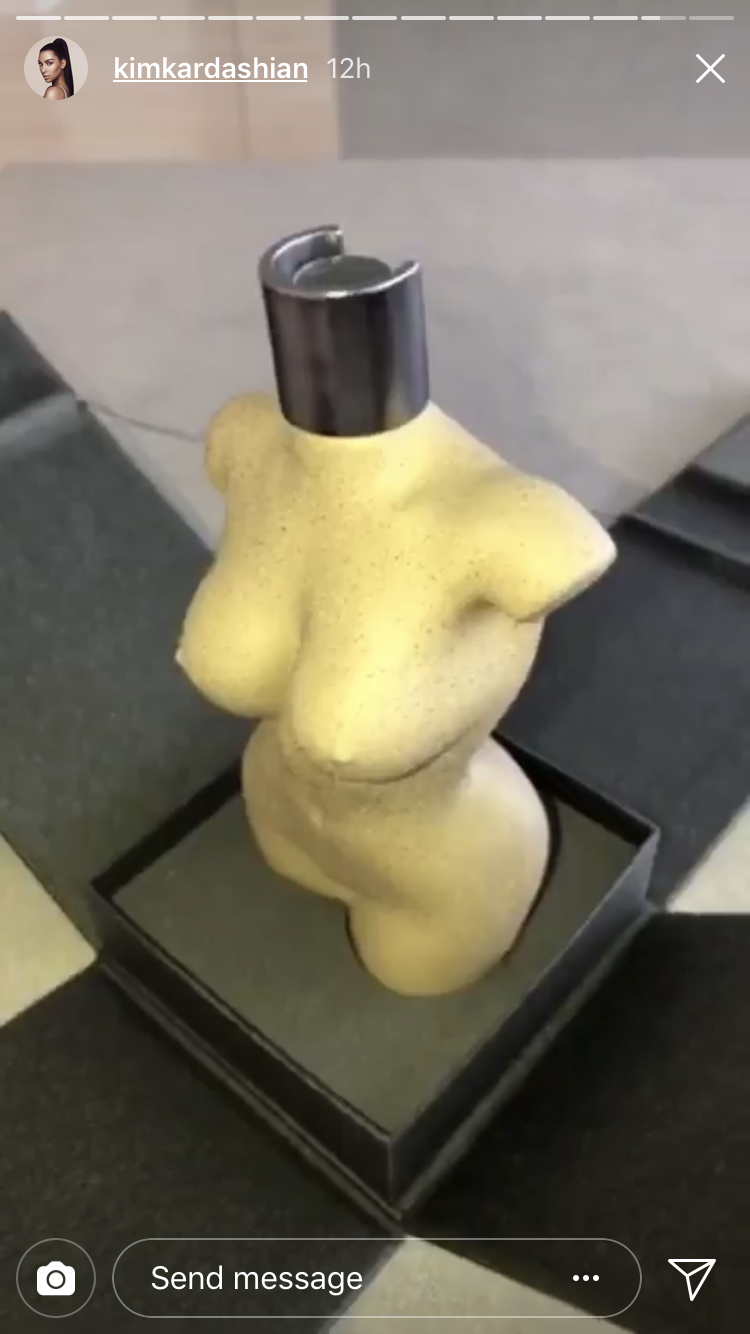 “We took a mold of my body and made it a perfume bottle,” Kim shared on Instagram before revealing the bottle. Those lucky enough to get their hands on one when it launches on Monday, April 30, will receive a grey origami-like box with a KKW label that opens to reveal the nude bottle on a pedestal. In the videos on her Story, the mom of three likened the packaging to a “statue in a museum.”

As far as the scent itself goes, Kim originally told the Business of Fashion that the scent smells “golden … even though that’s a [color] and something that’s just luminous,” but now we have a few more details. According to reports, KKW Body has floral and citrus top notes that are deepened by a base of vetiver, sandalwood, amber and musk. It’s a sensual pairing that is sure to be just as sexy as the bottle itself.

ORIGINAL POST: Get ready, Kim Kardashian is about to expand her KKW Fragrance collection with a scent that seems like it will be perfect for summer. The beauty mogul took to social media on Tuesday, April 24, to give fans a sneak peek of her latest scent, KKW Body, which will be available on Monday, April 30. KKW posed naked in a series of photos for the fragrance, which is inspired by her own famous figure, and needless to say, we all had a lot of questions!

While few details are confirmed about the latest launch, we do know it will be different than Kim’s previous fragrance releases. She launched KKW Fragrance in November 2017 with a gardenia-inspired trio of Crystal Gardenia, Crystal Gardenia Citrus and Crystal Gardenia Oud, and she followed that up with three more limited-edition scents for Valentine’s Day — KKW Fragrance KIMOJI Hearts Perfumes in Bae, Ride or Die and BFF.

On Twitter, a fan asked Kim if she would be keeping the tradition and releasing KKW Body as a trio, but she said this launch would be “just one scent.” Followers also speculated that the fragrance would be unisex, to which Kim replied that it is not but she hopes to “have a unisex fragrance in the future.”

So what do we know about KKW Body aside from the fact that Kim’s enviable curves will be taking center stage?

The mom of three recently shared in an interview with the Business of Fashion that she is “so proud” of her latest perfume and the scent is “so good.” She teased that the bottle will be shaped like her own body, and, on Instagram, KKW Fragrance shared a picture of two nude busts carved into beach sand that would appear to be a sneak peek of the design. It calls to mind the shapes of Jean Paul Gaultier’s famous scents.

Kourtney Kardashian Visited Congress in the Name of Clean Beauty

When it comes to the smell, Kim told BoF that she was inspired not by a place or object but by a color. She said the scent is what she thinks “golden” smells like — “even though that’s a [color] and something that’s just luminous.”

Considering KKW just got back from a fabulous bikini-clad vacation to Turks and Caicos with her sister Kourtney and the beachy imagery she’s posted on social media, it seems safe to assume there will be a summer vibe to be new scent. If Kim’s pervious fragrance launches are any indication, KKW Body will sell out in a snap and become a warm weather staple for everyone lucky enough to get their hands on a bottle!