A grieving mother who donated her dead baby daughter’s heart has seen her kindness repaid 16 years later – after her younger child received a life-saving organ donation of her own.

Lisa Mallett, 36, from Reading, told the Daily Mirror how news of the transplant had been bittersweet – as she was torn between relief and ‘heartbreak’ for the family of the young donor.

Her daughter Jadene died just a day before her first birthday in 2002, after suffering a fit in the bath leading to severe brain damage.

Lisa and partner Kevin made the selfless decision to donate Jadene’s heart valves in a move that brought the family ‘comfort and solace’. 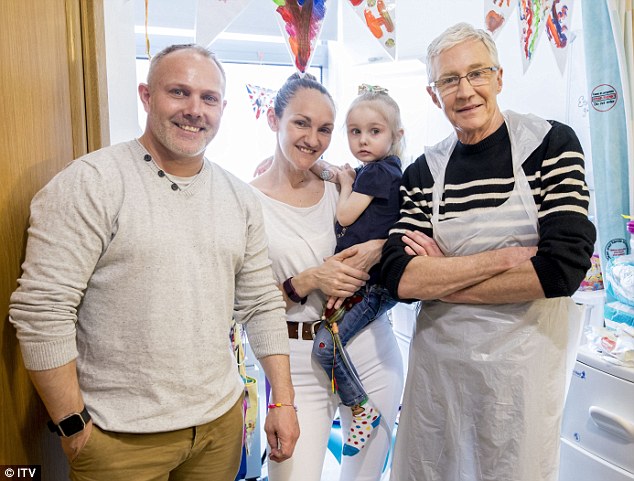 Kevin and Lisa (pictured on ITV’s Paul O’Grady’s Little Heroes with the presenter) spent 11 months in hospital with daughter Esme (second right) as she awaited a heart transplant. The organ donation took place just before Esme’s fourth birthday – and 16 years after the couple donated the heart of their older daughter, Jadene, who died following severe brain damage

And 16 years later, she was faced with the terrifying prospect of finding a donor for her younger daughter Esme when she was diagnosed with aortic stenosis, a serious heart condition.

Luckily, she was fitted with a new heart thanks to the kindness of another family and was able to return home shortly after her fourth birthday.

Lisa told the Mirror: ‘I couldn’t be more humble or grateful that this family did that for Esme. Their child’s heart is in my daughter, someone they don’t know.’

The family are set to appear on ITV’s Paul O’Grady’s Little Heroes, which sees the presenter go behind the scenes at at Great Ormond Street Hospital (GOSH).

Paul met Esme, now four years old, who spent 10 months at GOSH attached to a mechanical heart – known as a ‘Berlin heart’ – as she awaited a transplant. 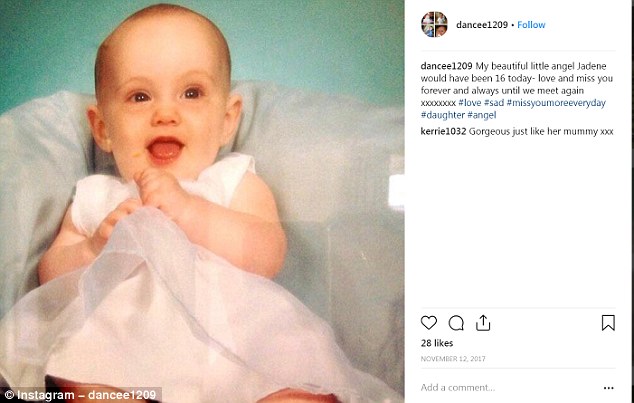 Kevin and Lisa’s older daughter Jadene, pictured, would have turned 16 in November last year. The youngster’s heart was donated to save the life of another child following her death in 2002

The youngster had already undergone a string of life-saving operations, and was in surgery for 28 hours over a two-week period.

Paul visited Esme’s ‘home from home’ – her hospital bedroom – and accompanied her for a special treat ‘a walk in the park’, which wasn’t as easy as it sounds given her serious condition.

Esme’s parents were on tenterhooks waiting for a new heart in the hope that family life could return to some kind of normality – and their prayers were finally answered when they received a heart from a young donor.

Paul said: ‘It has been an absolute honour to film at GOSH, meeting the children and their families as they go through some of their toughest days. 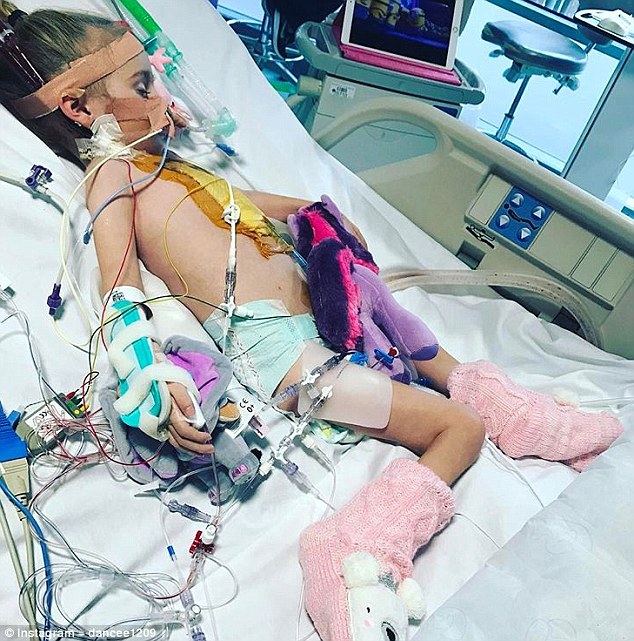 Lisa shared this picture of her daughter Esme while awaiting an organ donor last year. She underwent a transplant shortly before her fourth birthday and was allowed home soon after

‘They were truly inspiring. I have so much admiration for the truly dedicated staff who treat and care for them.

‘I can’t wait for you all to meet all the cheeky characters, happy faces and brave families that I had the privilege of meeting.’

Lisa added: ‘I always say, talk to your family about organ donation, so you don’t have to make that decision at a time of devastating loss.

‘If something tragic happens, your child could save another one.’

What is a Berlin heart?

Also known as a ventricular assist device (VAD), a Berlin heart is a mechanical device which can be used in people whose hearts are not strong enough to pump enough blood around their bodies.

It is used to allow time for a donor heart to be found. It is an air driven pump which takes over the work of the person’s own heart.

It can be used to take over the work of one or both sides of the heart.

The Berlin heart consists of a plastic chamber which sits outside the body.

It can be used for as long as several months but a person cannot remain on it indefinitely.