A bid by factional allies of the late Senator Kimberley Kitching to challenge federal Labor’s takeover of the Victorian party and its control over state preselections has cleared its first legal hurdle, with the High Court agreeing to expedite a special leave application hearing.

The push for a High Court challenge – spearheaded by the Health Workers Union, Plumbers Union, and United Firefighters Union – represents a major escalation of the factional war that has plagued federal Labor since the 52-year-old senator’s death from a suspected heart attack. 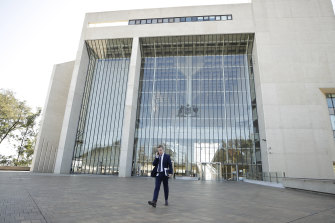 The High Court will hear a special application to challenge the federal takeover of Victorian Labor.Credit:Alex Ellinghausen

At a directions hearing in the High Court on Friday, Justice Stephen Gageler made an order that the special leave application be expedited to be heard by Thursday next week, with the parties directed to file their submissions by early next week.

Addressing the court by video link, Justice Gageler said that if special leave were to be refused “that of course would be the end of the matter.” If the special leave is granted, then the High Court will hear the appeal.

The lengthy court battle was triggered after the federal ALP executive took over the Victorian branch after The Age revealed wide-spread branch stacking, enabling it to choose candidates to run for election. Unions challenged the move but the Supreme Court ruled in October it had been lawful. A further appeal to the Victorian Court of Appeal was dismissed last month.

Federal Labor sources believe the case is highly destructive and fear that a consequence of legal action, if it is successful, is the party would not be able to contest the federal election in Victoria. Since May last year, the party’s national executive has preselected candidates for the 22 federal seats.

Senator Kitching’s power base in Victoria includes the Health Workers Union and Plumbers Union, with HWU boss Diana Asmar a close friend of the late senator. The Firefighters Union is aligned with Victorian Senator Kim Carr from the party’s industrial left wing, who is also poised to lose his preselection.