That cosy crime genre, the country house mystery, received a revivifying shot of adrenaline three years ago when writer-director Rian Johnson revved up the farce levels to a chaotic degree in Knives Out.

Now it’s the turn of the French. Director Nicolas Pleskof candidly acknowledges his debt to Johnson in the creation of Murder Party, which is set in a storybook chateau somewhere in the French countryside. Crowned with turrets, lined with secret passages and stuffed with feuding relatives and interfering old retainers, it’s owned by a crusty patriarch who has made his large fortune by inventing board games, of all things. He’s now commissioned Jeanne (Alice Pol), an ambitious young architect, to design a new games room where customers can come for a mind-bending weekend applying themselves to his latest puzzles. 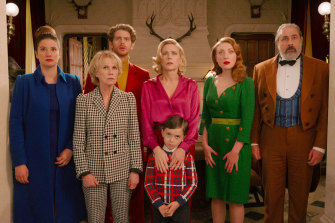 The director of French film Murder Party says he used the US crime caper Knives Out as inspiration.

Having drawn up the blueprints, Jeanne arrives, lugging a model of her proposed innovations, for her first interview with her client, Cesar Daguerre (Eddy Mitchell), a character who would probably have been played by Succession’s Brian Cox had this been a British production.

Possessing a face like a clenched fist and an urge to make trouble at every available opportunity, Cesar presents as an ideal murder victim. It’s no surprise that he’s lying dead on the carpet soon after introductions are concluded.

There is a promising array of suspects. Theo (Pablo Pauly), the son of the house, has long been itching to get out from under his father’s thumb. Lena (Sarah Stern), Cesar’s daughter, is so neurotic she could perpetrate a homicide without realising she had done it. Salome (Pascale Arbillot), Theo and Lena’s stepmother, is detested by all, and Josephine (Miou-Miou), who keeps a sharp eye on company expenses, has been at odds with Cesar over money. 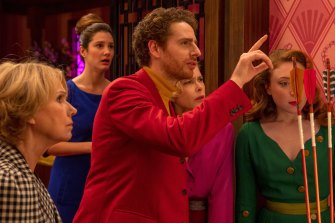 For most of the action, the plot unfolds like a predictably dramatised elaboration on Cluedo with long-buried secrets unearthed and Theo filling the pauses with his romantic pursuit of Jeanne, who’s becoming increasingly susceptible to him.

Pleskof heightens the nostalgia value with a production design that hearkens back to 1950s and ’60s Hollywood. The colours are vibrant primaries and Jeanne’s chignon is contrived as a deliberate tribute to Audrey Hepburn in her heyday.

The chignon and the neat little business suits also stamp Jeanne as a stitched-up character whose work has subsumed her life to the concern of her mother, Emmanuelle (Zabou Breitman), who favours a laissez-faire attitude to the present and the future.

These differences inevitably find their way into the storyline, but the script comes good with the twist that occurs once the secret passage comes into play.

It all shapes up as being good fun and there’s a bonus in watching two of French cinema’s great veterans, Miou-Miou and Mitchell, immersing themselves in pure silliness. However, it does fall short of the brilliance that made Knives Out worthy of the sequel that will soon be with us.

Murder Party is in cinemas from July 28.