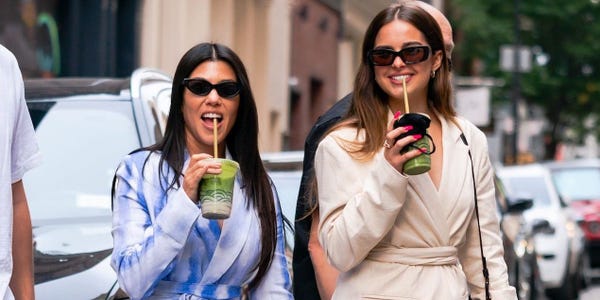 On Saturday, the duo was photographed walking around New York City in blazers worn as dresses with biker shorts barely visible underneath. Their outfits mirrored the "no-pants" trend, which was most popular amongst celebrities between 2018 and 2019.

At the time of writing, Kardashian's $297 jacket and Rae's $382 blazer — both designed by Eppram — are available to purchase online. The same goes for their shoes. Rae donned a $180 pair of Dr. Martens Jadon Platform 8-Eye boots, and Kardashian wore the $1,200 Leather Zip Pocket Combat Booties from Prada.

The rest of Rae's outfit included the $182 (£140) Preston sunglasses from DMY by DMY, and the $8 SKIMS face mask in Onyx. Kardashian, on the other hand, wore the same face mask, and carried an Hermes bag, which has previously sold for prices up to $26,700.

Later that night, Kardashian and Rae were photographed together again as they headed to dinner at Zero Bond, a private social club in New York.

Kardashian wore a red, leather jacket over a marble-print minidress and thigh-high velvet boots. She also carried an animal-print handbag.

Rae coordinated in red leather pants — designed by Aritzia and now sold out — and a $68 camouflage corset from IAmKoko.LA. She also wore a $950 pair of Prada shoes and carried the brand's $850 Re-Edition 2005 Nylon Mini Bag.

The TikTok star first appeared in a video with Kardashian's eldest child Mason Disick in March. From there, Kardashian and Rae have starred in YouTube videos together, attended events with one another, and referred to each other as "besties."

Because of their 21-year age difference, the friendship between Kardashian and Rae has puzzled some on the internet. In September, Kardashian, 41, responded to one critic who commented on an Instagram photo showing her and 20-year-old Rae posing in a swimming pool, as reported by Cosmopolitan.

"She's 41 and she's hanging around with 19-year-olds in swimming pools," an Instagram user wrote.

"Do you suggest a better place," Kardashian wrote in response, according to Cosmopolitan. "I'm looking for ideas…"