“Welcome back to the [climate] fight mates,” read a simple tweet from one of the world’s best-known climate scientists and communicators, Professor Simon Mann, shortly after Anthony Albanese was sworn in as Prime Minister on Monday morning.

Mann, a Distinguished Professor of Atmospheric Science at Penn State University in the United States, was not alone in celebrating Labor’s victory due to the perception that it means Australia would engage more closely in the global effort to tackle climate change.

“I’m looking forward to building on that with you, moving forward with progressive ideas, tackling climate change, and delivering results for people in both our countries,” wrote Canadian Prime Minister Justin Trudeau, echoing Fiji Prime Minister Frank Bainimarama, who wrote, “Congratulations, @AlboMP! Of your many promises to support the Pacific, none is more welcome than your plan to put the climate first – our people’s shared future depends on it.”

Nick Bridge, the UK Foreign Secretary’s Special Representative for Climate Change, wrote that he was watching developments in Australia closely. “Their climate and environmental policies have a disproportionate impact globally, and it’s vital for the world’s security, esp poorest/most vulnerable, that we dramatically accelerate decarbonisation,” he tweeted.

Some messages of support made it clear that many in the global movement expected far more of a Labor government than it had offered during the campaign.

“I welcome the incoming government and congratulate Anthony Albanese on his victory. In light of the upcoming Pacific Islands Forum Leaders Meeting in July, and the ongoing climate crisis and its impacts in the Pacific,” wrote Enele Sopoaga, former prime minister of Tuvalu, in a statement on Saturday night. 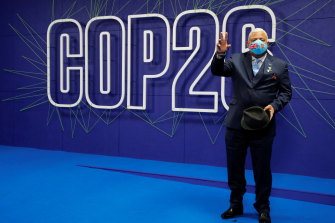 “I can only hope that this new Australian government will make a radical shift towards strong and urgent climate action and genuine support for the Pacific. This would include radical new Australian targets for emissions reduction under the Paris Agreement, no new coal or gas, and an ongoing commitment to supporting Pacific Island nations as we face the brunt of climate impacts.”

The former Kiribati leader Anote Tong, a key voice in global climate diplomacy said he welcomed Labor’s victory and Albanese’s offer to host a COP meeting with its Pacific neighbours, but warned that such an effort should not be allowed to become a exercise in greenwashing.

“It is no secret that I have been disappointed with the attitudes of the previous Australian government towards the Pacific on a number of fronts, including climate change,” he wrote. “My hope is that we will see stronger and more urgent climate action from the incoming government, including a more ambitious emissions’ reduction target, ramped-up support for climate-vulnerable communities in the Pacific and most importantly, a commitment to no new coal and gas projects in Australia.”

Labor’s climate policy does not include shutting down the export coal industry, and its 2030 emissions target is set at 43 per cent, substantially more than the Coalition had committed to, but less than what most scientists say is necessary to avoid the worst impacts of warming.

Dr Wesley Morgan, a researcher with the Climate Council Researcher and specialist in climate diplomacy at the Griffith Asia Institute said the Quad meeting would be an opportunity for Albanese to demonstrate the government was serious on climate.

“This is a pivotal moment. Climate action is a key area for cooperation among Quad states who
make up some of our most important trading partners and allies. The US in particular, our key
security ally, has pressed Australia to do more on climate as part of Quad collaboration.

“The US has integrated climate policy into its Indo-Pacific Strategy – Washington wants to see
countries in the region setting stronger emissions targets, and wants to serve as the preferred
partner as the region transitions to a net-zero future,” he said.

A guide to the environment, what’s happening to it, what’s being done about it and what it means for the future. Sign up to our fortnightly Environment newsletter here.