DOMINIC LAWSON: Gareth Southgate is the hero who made my wife turn on the TV for the first time ever

Something unprecedented happened last week. My wife wanted to know how to turn on the television.

Even more extraordinarily, it was because she wanted to watch a football game: to be specific, England’s World Cup match against Colombia.

Such is the remarkable effect on British society of the victories achieved in Russia by Gareth Southgate’s England team. 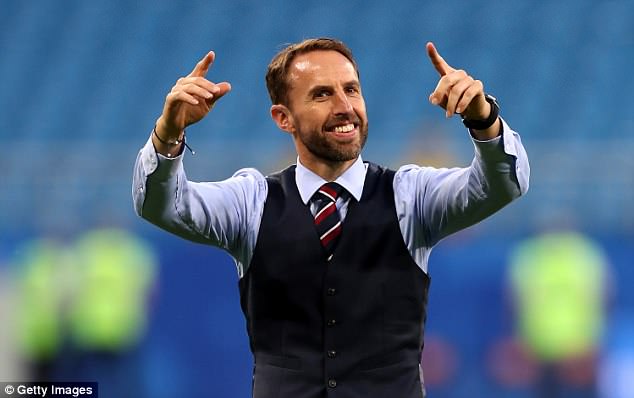 She has been captivated by the demeanour and conduct of the England manager, Gareth Southgate (pictured)

I should explain that the reason my wife needed such help was a) unbelievable as it may sound, she has never, during the more than 26 years of our marriage, volunteered to watch television before, and b) I was watching the England-Colombia game with a group of male friends in London, and my wife was alone in our house in Sussex. Well, she was with our four dogs, but none of them knew how to operate the remote control, either.

Actually, I was a bit startled to get the call on my mobile from Rosa, urgently asking me how to get the television on and how to find the relevant channel.

I was slightly embarrassed to be heard saying, while my friends were trying to concentrate on the last minutes of build-up before kick-off: ‘Darling, first of all you have to press the button on the left of the screen. That’s right, it’s got a red light, but it will turn blue when you press it. Good.

Those of you with a Sky box will work out how the rest of the conversation went. But it wasn’t straightforward. I began to feel as if I were a pilot on the ground attempting to explain to someone who had never flown a plane how to bring the thing in to land.

I should add that my wife has run several businesses. She also drives cars more skilfully than I do. But, as I say, she has never wanted to watch television before, and so had no reason to know how they work.

So why has she — who never before expressed the slightest interest in football — suddenly become almost obsessed with England’s World Cup campaign? 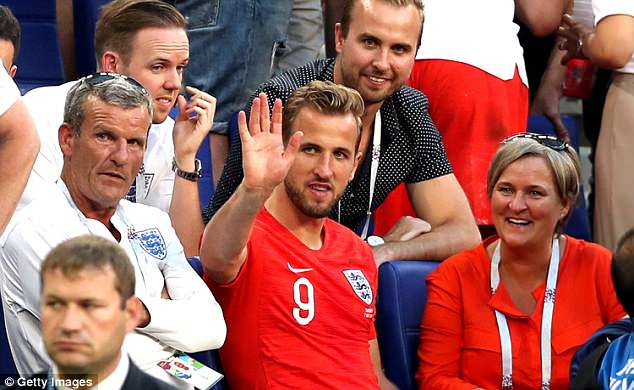 I’m no football fan myself, and the only team member I knew anything about was the captain, Harry Kane (pictured)

The main reason is the one which contributed to the extraordinarily large audience (23.8 million in the UK, apparently) for that England-Colombia game: like countless others, my wife is intensely patriotic. When the nation gets behind something and the flag of St George begins to be seen in every street, it tugs at her heart.

And, again in common with millions of others, she has been captivated by the demeanour and conduct of the England manager, Gareth Southgate.

That includes his sartorial elegance — something my wife values highly, and in which respect I have been a constant disappointment to her. The now trademark Southgate waistcoat has got a lot to do with that. And as my wife adds: ‘He leaves the bottom button undone, as a gentleman should.’

But what also won her over was that Gareth Southgate’s grandfather was a Royal Marine who (according to the England manager) always wore a waistcoat, and that Southgate said the whole family was ‘incredibly patriotic’.

Rosa’s father, one of her brothers, and two of our nephews were or are professional soldiers. The fact that Gareth Southgate takes his cues from the same tradition only intensified her identification with his hopes and ambitions.

It was also in part a result of her upbringing that my wife — now in her 60s — has never been a television watcher. She and her four brothers lived a very active outdoorsy life (after retiring from the Army, her father had a farm, and all his children helped out on it). If she wants to relax, she invariably opens a book.

A few years into our marriage, when my wife suffered a fracture of her leg (but because she was pregnant at the time, couldn’t take strong painkillers) I wheeled a television in front of her bed, suggesting that watching it might distract her from the pain in the way a book couldn’t. The thing simply gathered dust, so, a few weeks later, I wheeled it back out.

And yet, on Saturday afternoon, it was she who was urging me to turn on my — I mean, our — television, so that we didn’t miss a second of the England vs Sweden World Cup quarter-final match.

I found it an exhausting experience. Because my wife knows nothing about the game, I had to explain every term to her: offside, free kick, set-piece, half-time — you name it.

The real difficulties began when she started asking me about the individual England players.

I’m no football fan myself, and the only team member I knew anything about was the captain, Harry Kane (‘He plays for Spurs, darling. No, he doesn’t captain them. No, I don’t know why that is . . .’).

Fortunately, the teenage son of a friend of mine is a football fanatic and knows every detail of each England player’s career — what they’re best at, what their weaknesses are — ad infinitum.

Fortunately for me, that is. I have been plundering young Billy for information only so that I can answer my wife’s questions. Luckily, he is a most understanding 13-year-old.

I was similarly entranced by the game when I was that age. But, like many others, my declining interest owed much to the perception that it had become a cynical business, with players increasingly prepared to cheat and con both the referees and their rivals.

This England team has shown a different side.

But not entirely. When the Colombian player Wilmar Barrios pushed his head hard under the chin of the (much taller) England defender Jordan Henderson, our player went down as if poleaxed, clutching . . . his forehead.

He clearly wanted to con the referee into thinking he’d been struck in the face, which would have meant the immediate sending-off of the Colombian. I thought about pointing this out to my wife, but then decided I shouldn’t interfere with her innocent enjoyment.

Although, when watching the match with Sweden, it became clear to me that she was suffering almost more than a normal fan precisely because she didn’t know when the game was done and dusted in our favour.

Even when we were 2-0 up with less than a minute to go, she became intensely agitated when Sweden won a free kick near the England goal. ‘Oh, no!’ she gasped.

Now, however, she is confronted with a true crisis: she has arranged a dinner for all those who work for the charity she founded, and some time ago booked a private room in a chic restaurant . . . for 7pm this Wednesday. Which is exactly when England’s semi‑final match against Croatia starts.

It should be possible to hire a television for the room. But will her colleagues’ admiration for her unfailing calmness at work survive what they will witness once the match gets under way?

And if, by chance, the World Cup final is between England and Belgium, her passions will become uncontrollable. Not just because of her patriotic support for England, but also because she was educated at an Ursuline convent in Belgium and hated it. She still becomes angry whenever she is reminded of her years of incarceration (as it seemed to her) in that country.

But it’s too late now to unlearn how to turn on the television. We shall just have to face the coming football storm together. Along with every other normal family.