It’s gone from being rare to optional, fashionable and almost compulsory: the idea art should reveal the artist. Many playwrights also feel obliged to reveal their convictions, thereby often degrading art to doctrine. US playwright Will Arbery is braver and more ambitious. He bombards us with his opinions no more than did Shakespeare, so you emerge from Heroes of the Fourth Turning, about five conservative Catholics in the first year of Trump’s presidency, almost beatified by the fact you don’t know whether Arbery sides with them or against them. 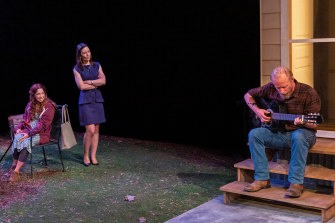 Heroes of the Fourth Turning is fundamentally a piece about people not ideas.Credit:Richard Farland

Across a dense two-and-a-half hours, these people interrogate each other’s faith, their own and their faith’s ideological baggage, to arrive at startlingly different conclusions about everything from Mary to motherhood, abortion to Trump, and racism to self-loathing. Yet the glory is that it’s fundamentally not a piece about ideas, but about people.

The best-written, best directed and best acted new play I’ve seen in some time, it comes within a rosary bead of receiving five stars. It misses because in Act Two Arbery lets it slide more into being that play of ideas. This is when Gina, the matriarch of a Wyoming Catholic college that has educated the others, attends the death-throes of a party celebrating her becoming college president, and is obliged to arbitrate in theological, moral and political debates. It’s not that the issues addressed aren’t engrossing, it’s that the pace cools, and play’s blood congeals.

Perhaps director Craig Baldwin (for Outhouse Theatre, Sydney’s most consistently excellent theatre company) should simply have forced the tempo more through this sticky patch. It’s a tricky dynamic, because the other four, in varying degrees of awe of Gina, subvert their own characters, and thereby thin the drama for a period.

When Gina leaves, the intensity returns, finally soaring to its highest pitch; a pitch that’s like having your face gouged with fingernails as you sit dumbfounded and appalled in a theatre.

Kate Raison rises to the challenging role of Gina, a super-intelligent professional theologian of almost evangelical slickness and conveniently flexible morals. Jeremy Walters brilliantly plays Justin, 38, a college apparatchik whose faith is apparently bullet-proof, but who packs a pistol just in case, buying into the argument of Teresa (Madeleine Jones) that US conservative Christians are effectively at war.

Jones animates all the intersections of Teresa’s Venn-diagram-like character: a high-powered, coke-sniffing New Yorker, who’s also a right-wing warrior railing against empathy. “The lepers need to be healed, not championed for their leprosy,” she declaims. While everyone in the play voted for Trump, Teresa’s the only one who still esteems him.

Eddie Orton excels as Kevin: feisty, weak, hedonistic, and desperate for either salvation or a girlfriend. Bourbon has eliminated his inhibitions, and Orton dexterously catches his wild swings from self-pity to quoting GM Hopkins – the latter episode underlining that all these people are well-read champions of an idealised western civilisation. Micaela Ellis tears apart the role of Emily, Gina’s pain-afflicted young daughter. She’s the most forgiving and accepting, and yet also the most combustible, and Ellis gives a performance of grace and searing anger.

Soham Apte’s naturalist backyard set creates two intriguingly distinct acoustic environments, and, speaking of sonic matters, the play is periodically punctuated by a horrendous screeching that Justin attributes to a malfunctioning generator. As layers of falsehood are stripped away, it may well be the sound of a world in torment.