The Little League Baseball World Series starts next week, but one team is already making history. The Mamie Johnson Little League team is the first predominantly black team from Washington, D.C. to advance to the regional tournament. As CBS News correspondent DeMarco Morgan reports, the team is just a few years old.

When everyone raced onto the field to celebrate Mamie Johnson’s win in the D.C. Little League championship last month, the team knew they had done something special. Rocco Gilbert, Dejuan Taylor, Daniel Marshall and their teammates came from behind to defeat the Capitol Hill league, setting them on a path towards the Little League World Series.

Their win was so meaningful that when it came time to raise money for the 330-mile journey to regionals in Connecticut, the very opponents they beat were among those who donated funds. 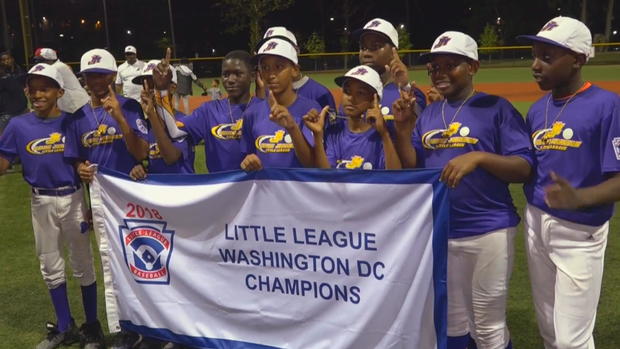 The Mamie Johnson Little League team is the first predominantly black team from Washington, D.C. to advance to the regional tournament.

“What does that mean to you to see so many people coming out and just cheering you guys on,” Morgan asked the players.

“That they care about us,” Marshall said.

“That we’re appreciated and not just left in the dust,” Gilbert said.

Just four years ago, the Mamie Johnson Little League didn’t exist, and some of its members had never even played baseball. In 2015, the league teamed up with the Washington Nationals Youth Baseball Academy.

“The mission at the youth baseball academy is to use baseball and softball as vehicles to foster positive character development, academic enrichment and improved health,” said Tal Alter, executive director of the academy. “It’s not just the 13 boys at this team, it’s the whole family here at the academy.”

The academy sits in Ward 7, one of the poorest neighborhoods in Washington, D.C.

“They think that because we live in southeast, we’re in Ward 7, that we play football and basketball. So it was kinda good to show them that we can play baseball, too,” Gilbert said.

“Carjacking, stealing. But none of that is really affecting me and stopping me from playing baseball,” Gilbert said.

“I make sure I stay away from the negativity, stay with the positive,” Taylor said.

Keith Barnes, the founder and president of the league, says his mission extends beyond baseball.

“Our goal was to change the culture. In that part of D.C., football and basketball is king… To see 300 kids playing baseball and really loving it, and some of the challenges are like they don’t have gloves. So we fundraise. We have sponsors,” Barnes said.

One day, the academy might funnel kids from this community into professional baseball. Less than 10 percent of major league baseball players are African-American.

“It’s important because we could be leaders to the younger kids to make them grow up and, like, do the same thing we did and be better,” Marshall said.

As for anyone who doubted the players, they say it only makes them stronger.

“I love my haters,” Gilbert said. “When somebody says something negative towards me, it only makes me work harder.”

While the team won’t make it to the Little League World Series after losing their game on Tuesday, they said they still feel like winners. A congresswoman invited them to tour the Capitol and a D.C. council member is introducing a ceremonial resolution in the team’s honor.