Live art takes us on provocative and disturbing journey 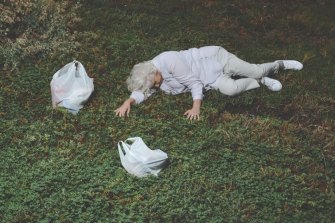 Gold Satino’s Seduction is for the artistically adventurous.

Following a style developed over years, Seduction drives its audience through urban and inner suburban locations to a dreamy electronic soundtrack, mingled with poetic reflections, as performances pop up from roadsides and vacant lots, dead ends and forgotten places.

The work plays hard to get in terms of its meaning. A fragmentary text from Davina Wright and Meredith Rogers can be maddeningly elusive, with a tendency to bat its eyelids at post-modernism too much and to defuse promising ideas with bathetic, even flippant, humour.

A feminist psychogeography permeates the haunting grandeur and loneliness of the industrial locales we encounter. The weird, operatic interventions staged in them – together with musings on tragedy, on women’s bodies violated and abandoned in public places, on driving by crisis without quite taking it in – suffuse this atmospheric journey to the underworld with provocative and disturbing undercurrents.