PARIS — Louis Vuitton is launching its first high jewelry campaign, fronted by Alicia Vikander, marking steep ambitions from the luxury label as it continues its push into the category.

“She’s very regal but approachable,” said Michael Burke, the brand’s chief executive officer, speaking with WWD from an upper floor meeting room of its buzzing Pont Neuf headquarters here. The executive pointed to her training as a classical dancer, stressing the importance of showing the movement of the body for displaying jewelry.

“There’s a return to jewelry that’s sensual,” he remarked, adding that jewelry worn on the skin — rather than in the hair, for example — takes on a “whole new sensuality.”

The executive noted that Nicolas Ghesquière, who designs the label’s women’s collections, started working with Vikander first. The designer felt she had “the right energy, and the right type of grace and movement and expression to bring his clothes to life,” Burke said.

He noted a compatibility in style with Francesca Amfitheatrof, Louis Vuitton’s artistic director for jewelry and watches. 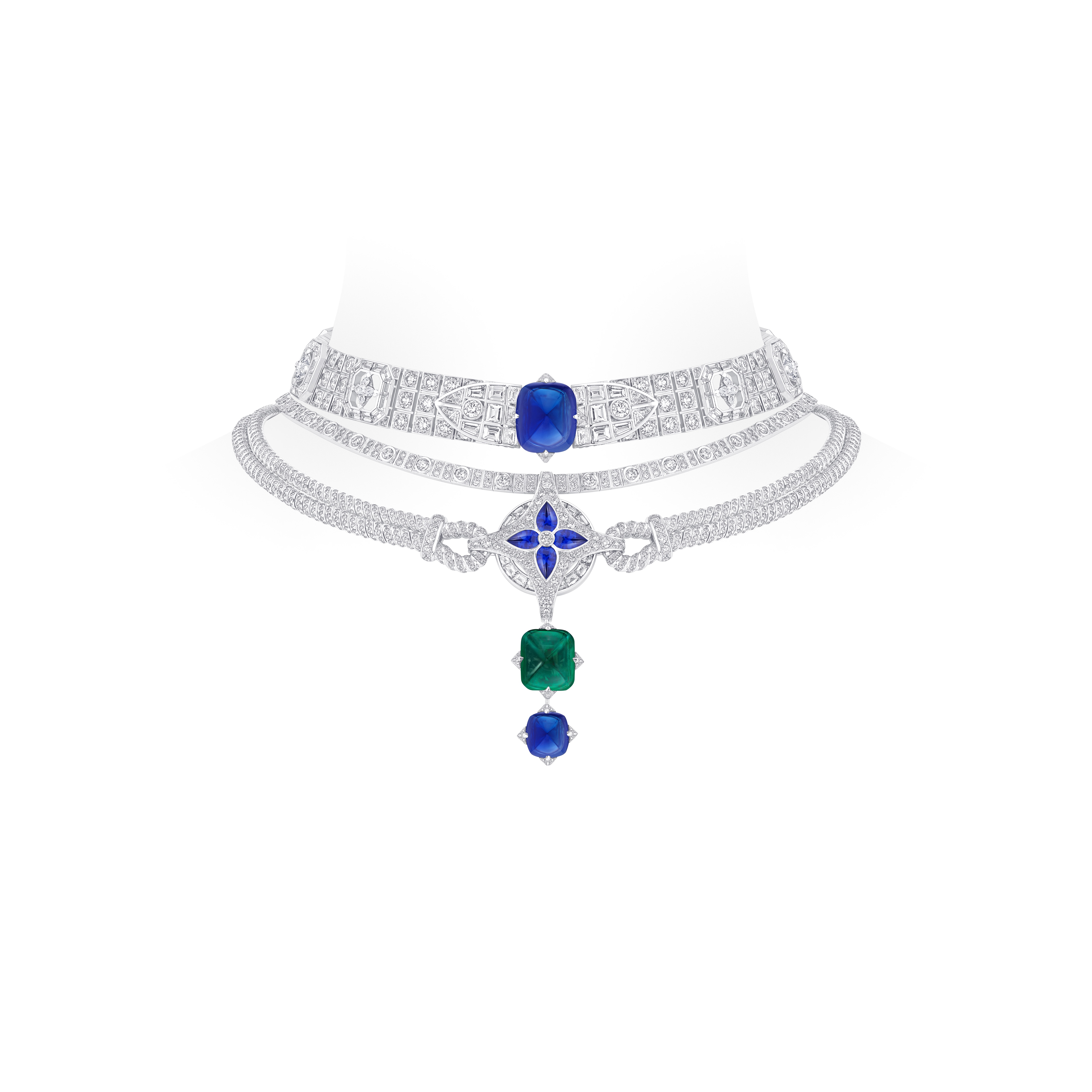 “It has to be authentic,” said Burke, when it comes to brand ambassadors.

“She’s not overexposed — she’s her own person, she’s quite mysterious,” said Amfitheatrof, speaking in a separate interview through a Zoom call, describing Vikander.

The actress has a “sense of mystery where you want to know more about her,” added Amfitheatrof. The designer pointed out that putting her face to the label serves as a unifying force for the work of three different artistic directors — the third being Virgil Abloh, artistic director for Vuitton’s men’s collections.

“We are three different artistic directors who all do three very different things; it’s great to have one person that kind of is the umbrella over all of it,” she noted.

The historic trunk maker began building the high-end jewelry category around a decade ago. It has workshops on an upper floor perch of the Place Vendôme flagship, and made headlines last year introducing the discovery — and its ownership — of one of the world’s biggest rough diamonds, the Sewelo. 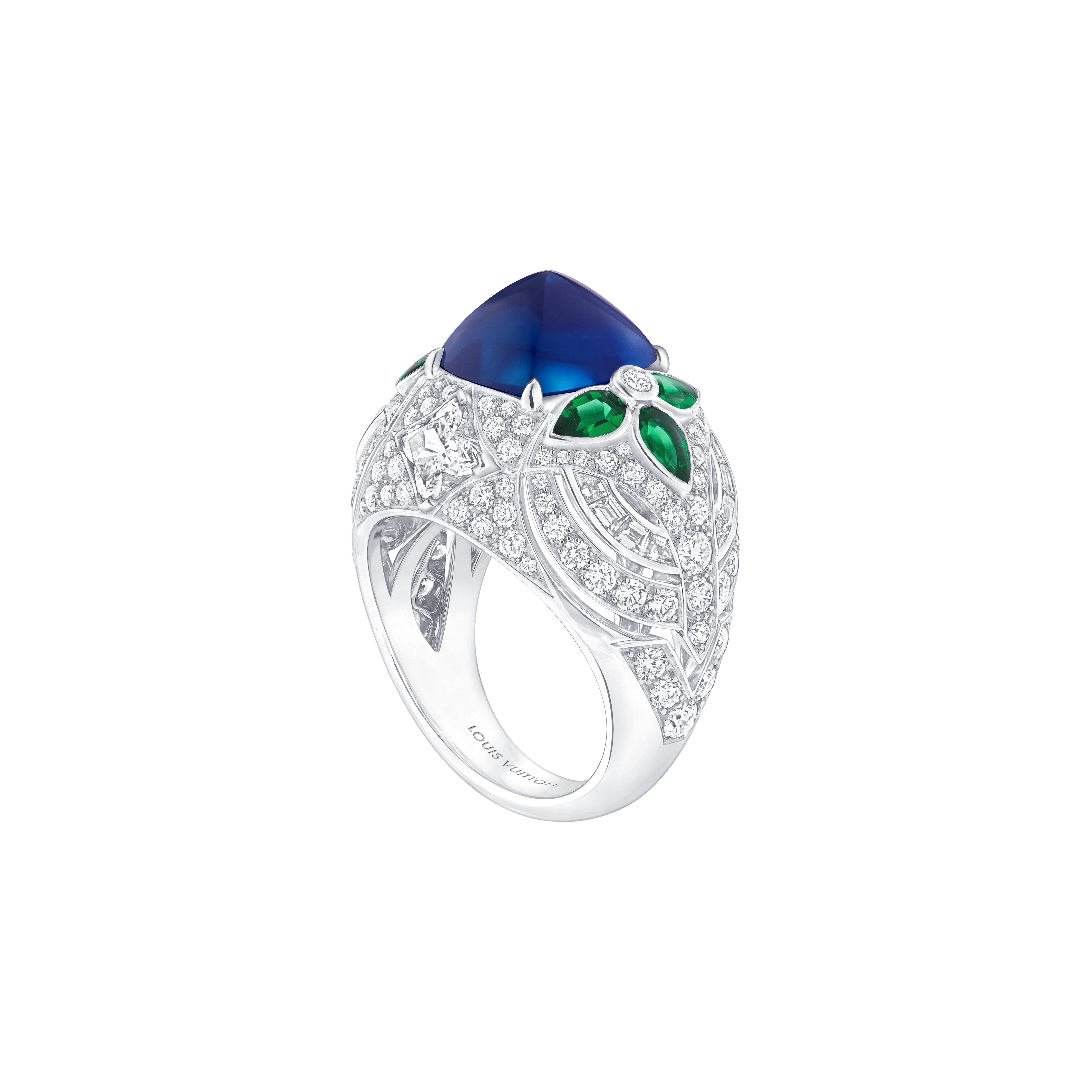 This year, the house is marking 200 years since the birth of its founder, Louis Vuitton, with its largest jewelry collection made up of 90 pieces, titled Bravery. The jewelry draws key themes from Vuitton’s life, starting with star configurations in the sky when he was born — the Constellation d’Hercule necklace — packed with stones, mixing tsavorites, tanzanites and 50 carats of Australian opals. Other themes include “The Mythe,” which features a three-row necklace with a 19.7-carat cabochon sapphire from Sri Lanka, an 8.6-carat Colombian emerald and a 7.11-carat sapphire from Madagascar. Other key pieces include the transformable Star du Nord necklace, which includes a 10-carat monogram cut diamond.

“I love to put a lot of stones all in one piece, so instead of having your emerald, and your diamonds, you’ve got all of them, on one necklace,” said Amfitheatrof, describing her approach to one piece. “Why not, plus a flawless and another two diamonds!” 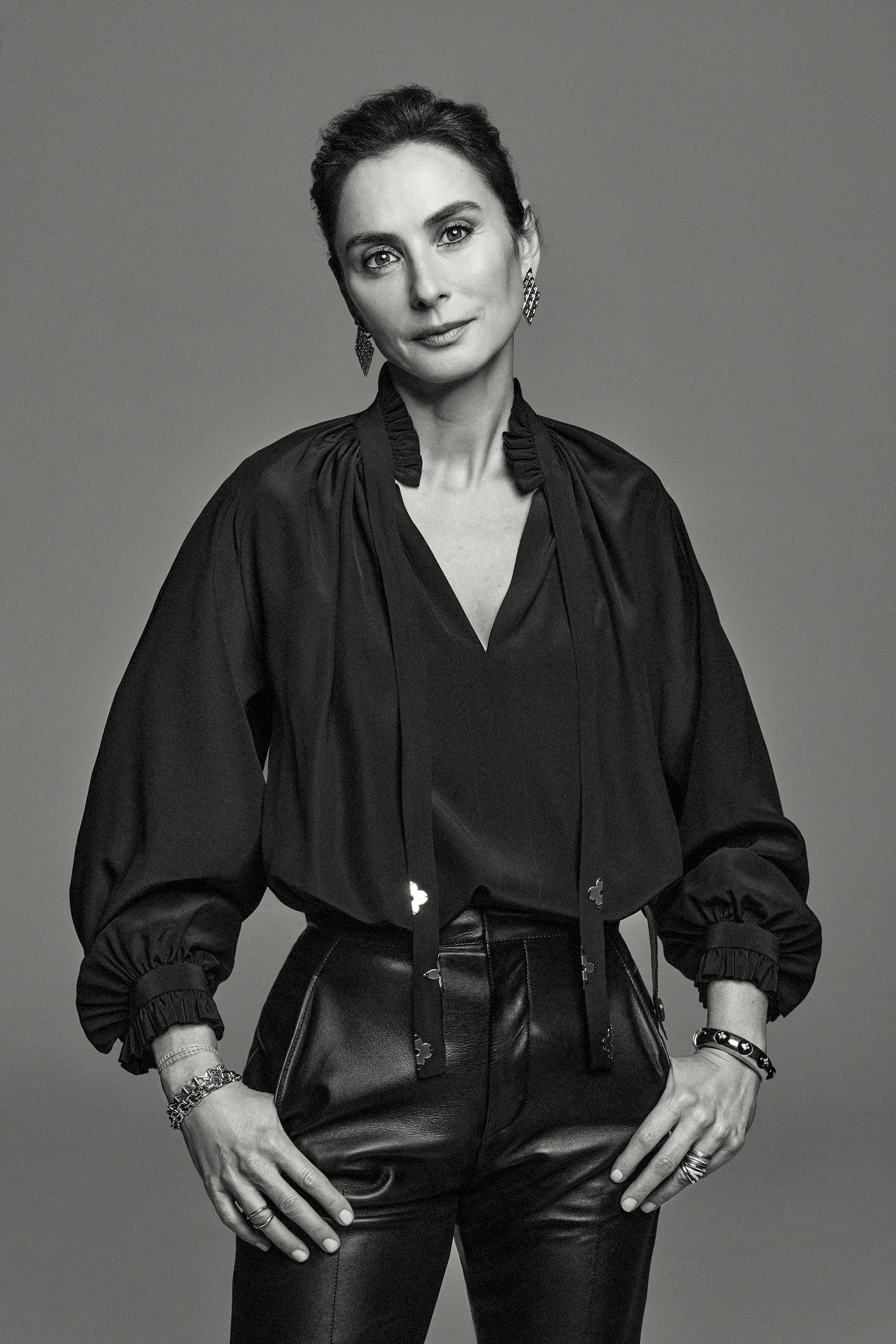 Francesca Amfitheatrof is artistic director for jewelry and watches at Louis Vuitton. Courtesy of Louis Vuitton

The pieces draw on house codes, some sprinkled with monogrammed star- and flower-cut diamonds — patented — and featuring diamond-pavéd cords and locks, as well as latticework inspired by the features of the trunks and their interiors.

It was designed over the past two years, through what Amfitheatrof described as a very unique process, given the lockdown — she was based in Connecticut.

“I had seen the stones, so it’s not that I didn’t know them but we weren’t best friends — put it that way — we met,” she said, noting the challenge of not having the stones on hand.

Being isolated, however, carried advantages, allowing for a deep dive into design, without the disruptions of life under normal activities.

“I had complete isolation and the time to really go into it deeply, in a way more deeply than you’re used to because of all the rushing around, the flying around,” she said. “That was kind of fabulous.”

This is her third collection for the label, and she said that helped in terms of trust and understanding as well as communication with teams.

“I think this was a real moment where experience showed,” she said. 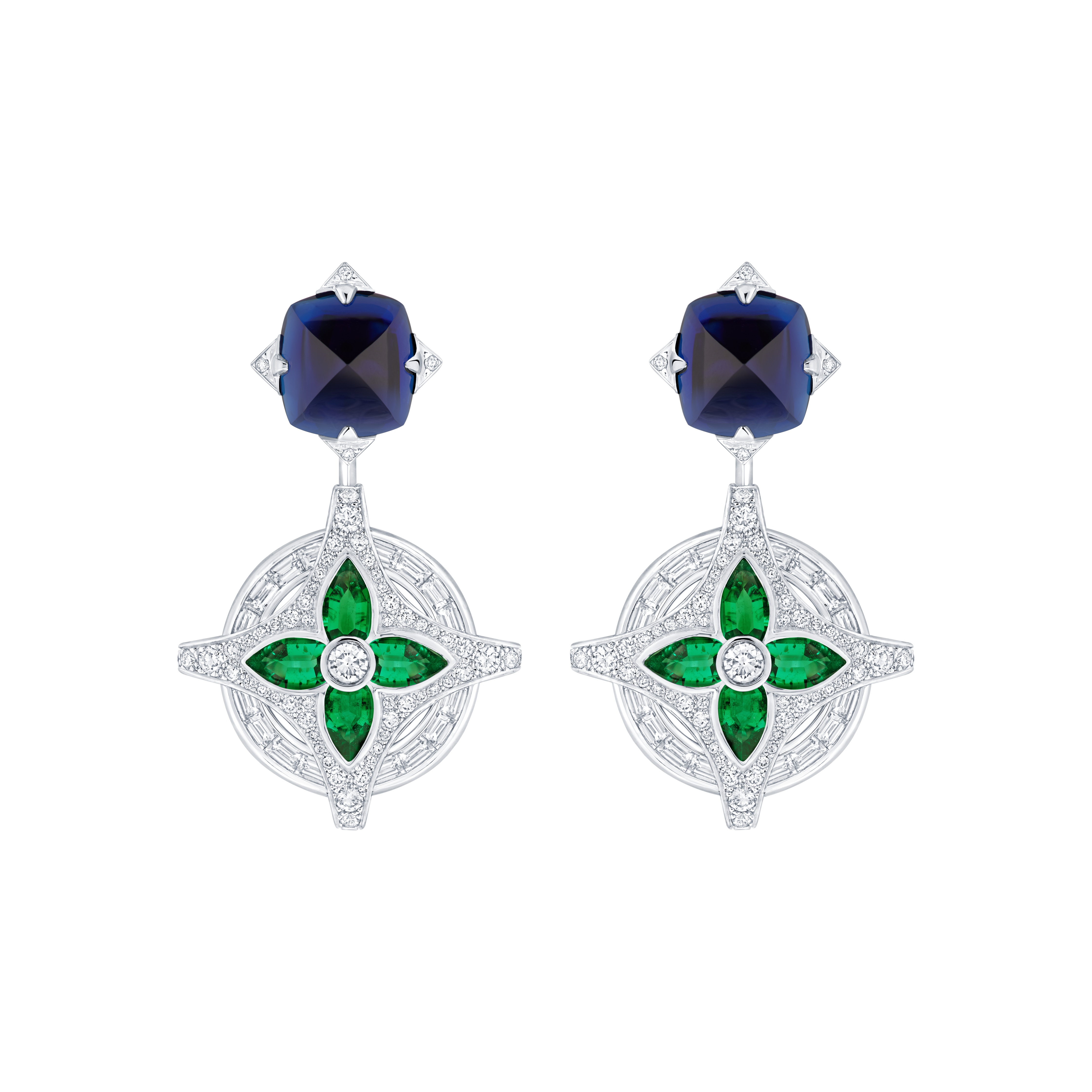 Describing the work process, she said she challenged her teams in the workshops through regular Zoom calls that were maintained throughout the pandemic.

“I really pushed them, because that’s what I know they can do and that’s what we want to achieve, because if you’re going to do something quite graphic and quite bold, it has to be sensual, it has to be feminine, it has to sit on your skin in a way that is full of lightness and movement,” she said.

Speaking about the jewelry in the collection that featured cords and pompoms, she explained that each section contained an individual piece, for “total fluidity.”

Working with Place Vendôme jewelers is the “joy of all joys,” she enthused.

Being trained as a jeweler herself, when it came to working remotely, also helped, she said, describing the process.

“I think by now there’s a certain sense of pride as well, because they’re phenomenal what they can do,” the designer added.

Describing workshops that have been built from scratch under Burke’s leadership, she noted a mix of the the “most famous” and best, as well as younger artisans — who proved to be particularly adaptable during lockdowns, some building a space at home to keep working.

When it came to the creative process, Amfitheatrof said she thought a lot about the house founder and what made him unique.

“It felt like I was walking alongside Louis Vuitton, the man,” she said, noting he can “get a little bit lost” given the high level of energy and activity at the luxury house.

Reflecting on Vuitton, she said she thought about the Age of Enlightenment, when he arrived in Paris, and the sense of expansion that he must have felt, as travel started to take off, with trains and boats — and trunks. The founder left his village in the mountainous region of Jura at the age of 12, on foot — arriving in the French capital two years later.

“That’s how you get your education, you leave a boy and you arrive a young man,” she said.

“There is something that is intangible that makes each one of us unique and definitely he had this combination of different interests, and I think that arriving in Paris, and feeling and breathing and understanding that change and understanding society, politics, geography, political advancements — he just saw what could be done,” she added.

His luggage business was “a technological achievement but also an aesthetic — an aesthetic that is still chic today, still elegant and modern,” Amfitheatrof asserted.

“I don’t know if Louis had ever imagined getting involved with billion-year-old stones,” remarked Burke, reflecting on the link between high jewelry and the brand. He went on to draw connections between the label’s past tradition and current activity.

“It’s lasting, enduring quality and value, and that’s what makes a luxury house versus a fashion house,” he said, noting he expects high jewelry from Louis Vuitton to sell well in the auction houses in the future.

Amfitheatrof and Burke both cited the work of sourcing stones as crucial.

“It starts with the hunt — primordial instincts — and it can take years and years,” said Burke, noting that stones in the Bravery collection took years to source, describing waiting for a stone’s cousin, its alter ego, its opposite.

The executive noted that when it comes to the luxury universe, gem stones are the raw material that has the strongest influence on the creative outcome of a piece.

“It’s a tango between the cutter and the polisher and the designer,” he said, repeating the list of players, to work in the role of ‘the stone.’

“The stone is the most important, the stone has the loudest voice in determining what the final product will be,” he said.

“That I love, that excites me, makes me get up in the morning — that’s something I really like because it’s a bet, you’re betting on the rough,” he said.

“If you want to have an exceptional stone you have to start now, you have to go upstream, you have to be a lot more involved upstream, with the people in the field, and you have to tell them what you’re looking for — and if they know where to look it’s going to be closer to what our dreams are than if you just come to the table and just look at finished stones,” he added.

Burke explained how the house forged relations with cutters and polishers in Antwerp to invent the flower cut.

“The more you’re involved upstream the more you’re going to have an impact on the jewelry and the more the finished product can be striking, unique and specific to your house,” he added.

To illustrate Vuitton’s approach as taking risks, with colors and cuts, for example, Burke mentioned that cabochons were used in the collection for the first time, noting medieval and Eastern influences, but also their genderless nature.

Yes, men are interested in high jewelry he said, noting a number of pieces in the collection have already been sold to men.

“This is not something we think is going to happen — we’re in the middle of it,” he said.

As for the famous Sewelo diamond, it’s still in its rough state.

“We’re just at the initial stages, nobody’s in a rush, it’s so unique so we’ll see what happens,” he said, noting research is ongoing, which perhaps might prompt ideas.

“We may have something completely out of left field that comes to us after visualizing the inside of the rock,” he said.