Maid of honor dons T-rex costume for sister's wedding: 'I regret nothing'

Report: Aug. 18 is the most popular wedding day of the year

Is spending expected of wedding guests getting out of hand? The ‘Generation Hexed’ panel weighs in.

Forget about awkward elephants in the room – there was a dinosaur raising eyebrows when one confident maid of honor rocked an inflatable T-Rex costume for her sister’s recent wedding.

But in case you're wondering, the answer's no — in a hilarious Facebook post that's gone viral, the woman insisted her prehistoric fashion statement didn't upstage or offend the newlyweds.

On Sept. 2, Christina Meador opened up about the unique outfit she donned for the Nebraska nuptials of older sister Deanna Adams.

Ahead of the big reveal, a hysterical image of Adams and her new husband taking their vows, flanked by their bridal party – and Meador dutifully holding her sunflower bouquet – was widely circulated on Facebook and Reddit, racking up thousands of likes and comments, The Daily Mail reports. 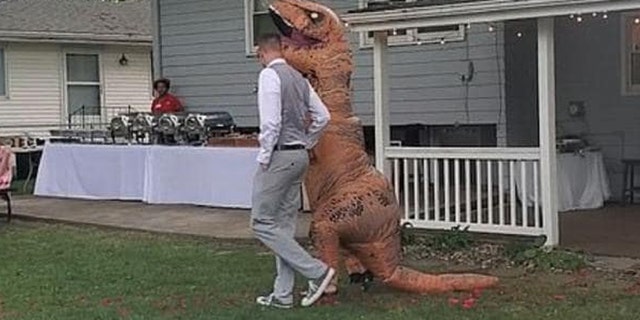 “About a year ago, my big sister texted me asking if I would be her maid of honor,” Meador told the outlet. “She, knowing that I'm not a big fan of wearing formal dresses and that I probably wouldn't have a lot of money to buy something really nice, reassured me by letting me know that I could pick out any outfit that I choose.”

“I was trying to think of something that I would be willing to wear more than once and thought to myself, "Well, she did say ‘anything,’ and if I'm spending more than $50, I want it to be a dinosaur costume, because they're fantastic and I've always wanted one,” the Texas woman dished. “I sent her a text so that she could have a laugh – surprisingly she was OK with it!”

"She did say ‘anything,’ and if I’m spending more than $50, I want it to be a dinosaur costume, because they’re fantastic and I’ve always wanted one.’"

Though the maid of honor admitted that she seriously debated wearing the costume ahead of the Aug. 10 nuptials, even toying with the idea of dressing up as a TARDIS police phone box from  "Doctor Who," something about the dino ensemble “stuck” with her. 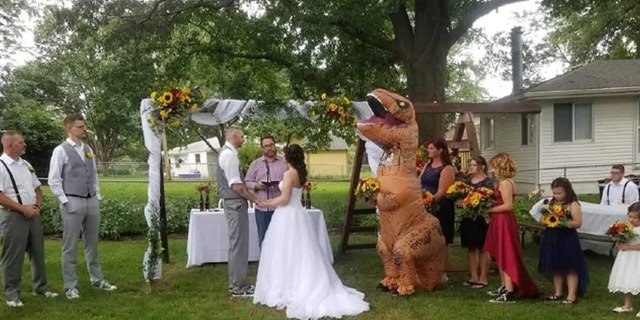 “It was hot!” Meador said of wearing full-body costume to the outdoor August nuptials.
(Catherine Grilli)

Meador said she even bought a proper dress to possibly wear on the big day – but fate intervened. The chief bridesmaid lost weight ahead of the wedding, and the frock was too big – seemingly leaving her with just one option.

With her sister’s blessing, the cheeky maid of honor slipped into the inflatable T-rex look to the outdoor summer ceremony – and never looked back.

“It was hot!” Meador said of wearing full-body costume. “I remember being surprised that everyone seemed to be doing their best to avoid noticing the elephant in the room (or should I say dino) but it was hard to see in the costume.”

Changing out of the costume for the reception, the jokester later shared a must-see photo of the ceremony to Facebook – though she never expected it to go quite so far and wide. 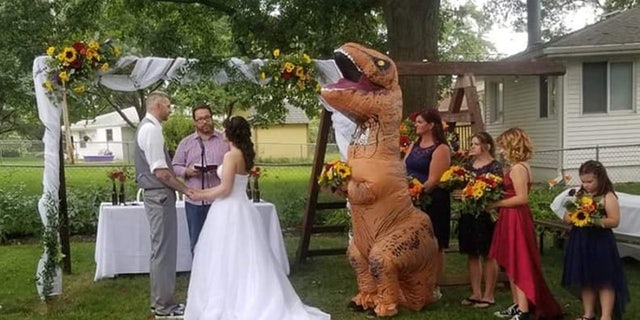 <br data-cke-eol="1">
With her sister’s blessing, the cheeky maid of honor sported the inflatable T-rex look to the outdoor summer ceremony – and never looked back.
(Catherine Grilli)

Though Meador says that commenters have largely praised the silly stunt as creative and original, some critics have accused her of trying to steal her sister’s thunder.

The newlywed, however, has since clapped back with opinions of her own, defending her “awesome” little sister and the innovative look.

“It's not a joke, it's a giant middle finger at spending thousands of dollars and putting ungodly amounts of pressure on ourselves just to please a bunch of people who, in the end, only want free food and drinks,” Adams said, telling off one Facebook commenter. “The point was to get married to the man who treats me like I hung the moon, and we did that part.”

“My sister is awesome and I genuinely was not kidding when I said she could wear whatever she wanted,” the laid-back bride added.