Doctors have revealed one of Melbourne's biggest public hospital networks is short of basic protective equipment for staff, and expressed concerns health workers and patients could be at risk of contracting COVID-19.

Leaked minutes from a meeting between Eastern Health senior medical management and hospital doctors noted shortages of medical scrubs – sanitary clothing worn by doctors and staff – as well as protective masks, with some newly sourced masks found to be “defective”. 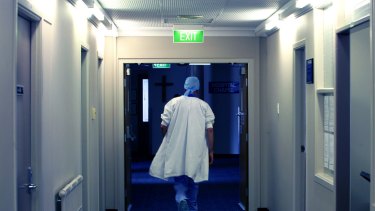 Doctors are concerned about a lack of personal protective equipment.Credit:Nic Walker

In the meeting, doctors also asked whether there would be shortages of medication and other supplies. A manager replied there already were “and it is likely there will be continuing issues”.

Eastern Health, which includes Box Hill, Maroondah and the Angliss hospitals, performed 40,350 operations in 2018/19 and had about 170,000 emergency department presentations.

Medical staff told The Sunday Age that they were worried by a lack of supplies as the hospital service struggled to plan for the coronavirus pandemic. Sickness among staff could put a severe strain on the system.

“Our hospital network is refusing to provide doctors and nurses with hospital-laundered scrubs to use,” said one doctor, who asked to remain anonymous. 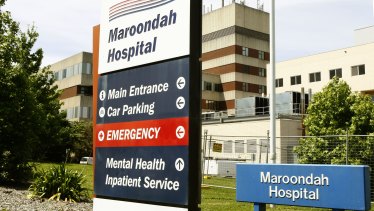 “We don’t want to bring COVID home to our families. This is at odds to most other hospitals and, in fact, guidelines.”

The doctor accused Eastern Health of doing the “bare minimum” on protective equipment. 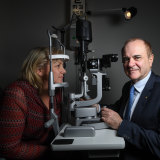 "We have had concerns about this for a number of weeks," Associate Professor Rait said. "There's been clear evidence of insufficient supplies of personal protective equipment."

He said some Victorian hospitals had been well supplied while others had not. "Equally, the overall stock situation has been precarious as well," he said in reference to global shortages of equipment.

At least 157 medical workers in Victoria have been infected with the virus while there have been reports of doctors going to Bunnings to buy their own masks and goggles. In late March, Box Hill Hospital said six healthcare workers had the virus.

In a video meeting with staff on April 9, the clinical director of infectious diseases and infection prevention at Eastern Health, Dr Stephen Guy, acknowledged shortages, according to minutes of the meeting.

When asked by staff about surgical masks that were found to be defective in NSW, and whether there were concerns about masks at Eastern Health, Dr Guy conceded there were issues.

He said the significant increase in sourcing masks “has led to some defective product” and that they had placed restrictions on the use of N95 masks, which offer high-level protection for medical workers. They were considering ways to “recycle” and reuse masks.

Professor Dewey said the hospital did not hold supplies for all staff to utilise scrubs and “despite surgery ceasing, there are still inadequate supplies for this”.

She said there was an “acknowledgement that being paid a uniform allowance is not the same as being provided scrubs".

Sources at the meeting said Professor Dewey said she had been “advocating” for the provision of more scrubs with Eastern Health executive leadership but no decision had been made.

“We have sufficient stock of PPE [personal protective equipment] to meet our current demand,” he said. “And this is being managed in conjunction with Health Purchasing Victoria and the Department of Health and Human Services.”

The concerns come as a new Victorian taskforce considers if it needs to ration protective equipment for health workers because of shortages of medical masks and gowns.

The personal protective equipment taskforce, headed by Victoria’s Chief Medical Officer, Professor Andrew Wilson, is to develop detailed advice on who needs to use the supplies.

The taskforce would look at existing guidelines, including from the World Health Organisation, to determine what was required.

Professor Wilson said this week the sector needed consistent and clear information about what protective equipment was needed. Widespread inappropriate use of equipment as well as panic buying and stockpiling has worsened global shortages of equipment, according to the WHO.

Associate Professor Rait said PPE was supplied to Victorian hospitals through a storage facility in Dandenong. He said he was "reassured" the new taskforce would improve supply.

Do you know more? Send us a confidential and encrypted message on Journotips