The role, which will be as chairman of the NSW Net-Zero Emissions and Clean Economy Board, is set to go to cabinet for approval on Monday afternoon, high-level sources who declined to be named have told the Herald and The Age. 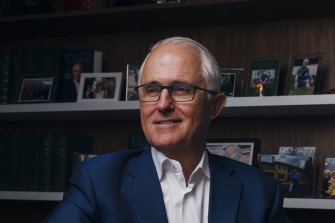 Former prime minister Malcolm Turnbull will head a new advisory board for the NSW government on its 2050 net-zero emissions target – if, as expected, cabinet approves the role.Credit:James Brickwood

Support for Mr Turnbull’s role was secured between senior NSW government figures last month but is expected to be put to cabinet on Monday.

News of the pending role was leaked to Nine Radio’s 2GB on Monday morning. The program said NSW Energy and Environment Minister Matt Kean would recommend Mr Turnbull for the role.

Mr Kean declined to confirm the recommendation. The minister does not comment on matters that are cabinet-in-confidence, a spokesman for Mr Kean said.

Mr Turnbull’s return to a high-profile role is likely to stir opposition from some conservative circles particularly as his new role would focus on assisting NSW to meet its commitment to be carbon neutral by 2050.

Climate policies advocated by Mr Turnbull twice brought him undone within the federal party room, first when he was opposition leader in December 2010. In July 2018, his support for a so-called National Energy Guarantee to reduce greenhouse gas emissions triggered a backbench-led revolt that toppled his prime ministership.

Since leaving federal politics, Mr Turnbull has made renewable energy and climate action among the issues he was been most outspoken about.