A man who has been growing his hair for seven years despite being called an ‘ugly woman’ claims he has been accused of turning women’s sexuality.

Actor and model Cristiano Braga, 28, from Minas Gerais, Brazil, has been growing his 26inch long hair since 2012 when he decided to take the plunge, despite fearing it could lead to him being bullied at school.

His striking look has attracted a lot of positive and negative attention, some from women who say it’s ‘unfair’ for a man to have luscious locks like his.

Meanwhile men have accused him of wanting to ‘turn’ women’s sexuality due to his long hair.

Cristiano has learned to brush off cruel trolls and says he is proud of his hair, which he maintains with natural oils such as aloe vera, avocado, camomile, mint, rosemary and vegetables. 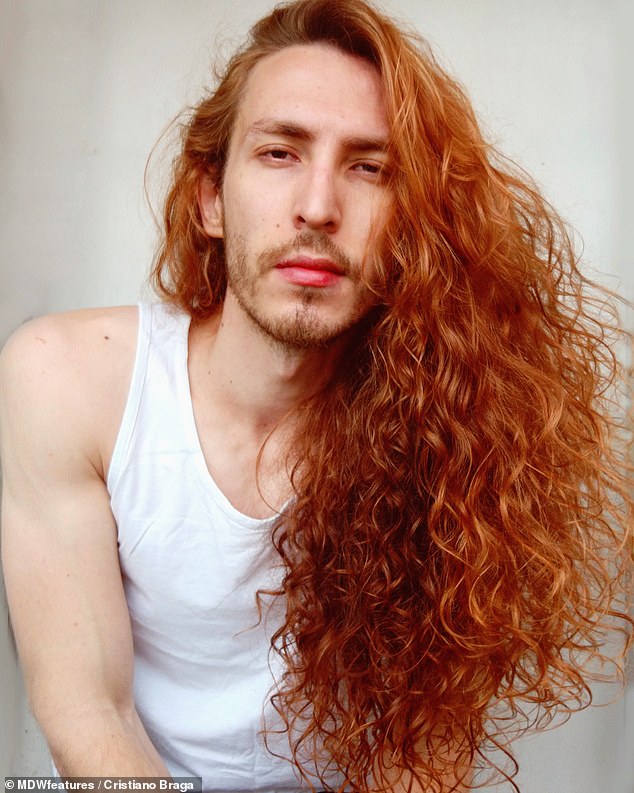 Cristiano Braga, 28, from Minas Gerais, Brazil, has been growing his long hair, which is 26 inches long, since 2012 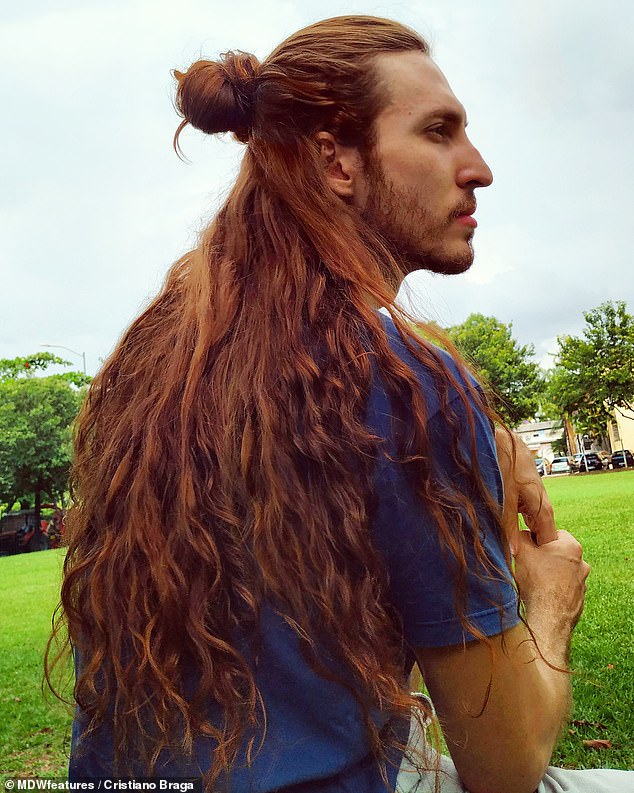 Despite his hair being 2ft 2in in length, he says it only takes him five minutes to wash it and says he has been compared to Ariel from The Little Mermaid.

‘I started to let my hair grow in 2012. I have no explanation for letting my hair grow; I looked in the mirror and decided to grow it, I’ve always liked long hair,’ Cristiano said.

‘There was a time, as my hair grew, I was quite criticised; people called me a woman, broom hair, scarecrow, they would cut my hair, they said I was ugly, weird.

‘I get a lot more questions now; the strangest question I got was if I wore a wig, because my hair glowed a lot.

‘Whenever someone approaches me on the street, I get a little embarrassed, because the person always draws the attention of others to me, and although it does not seem like it, I do not like to expose myself much.’ 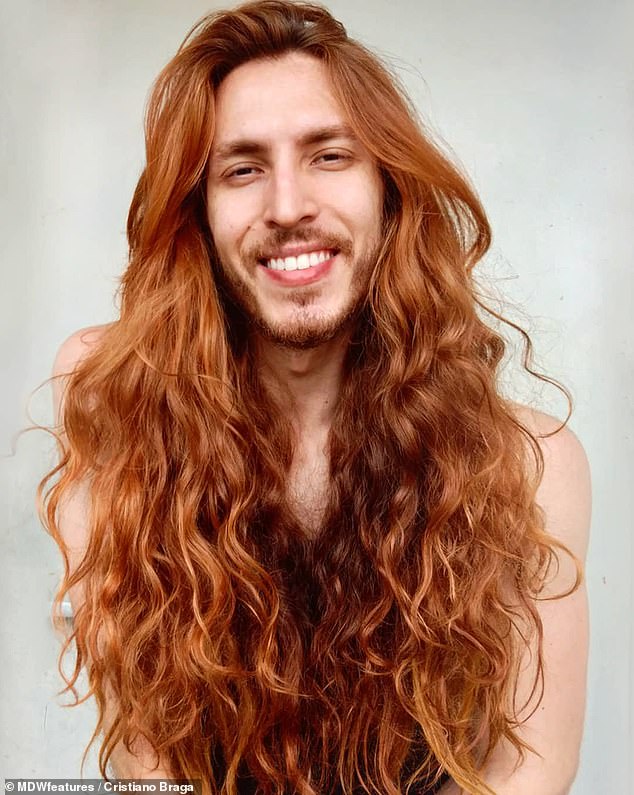 Despite his hair being two-foot-two in length, Cristiano says it only takes him five minutes to wash it and has been compared to Ariel from The Little Mermaid

Cristiano said he is shocked when people comment that his hair is better than theirs because it ‘demonstrates how low a person’s self-esteem is and needs to be worked on’.

He added: ‘It makes me very sad when they ask me if I want to “turn” women because I have long hair – it shows that society does not accept what is different from the patterns.

‘Prejudice is something very present in our society and must be fought. I am always called Jesus, John Lennon, Jared Leto, Axle Rose, Ariel, Merida, Little Mermaid, Rapunzel, among other personalities and characters.

‘An interesting case was a group of deaf people who approached me using sign language to ask me if I was from a band, they thought I was famous. 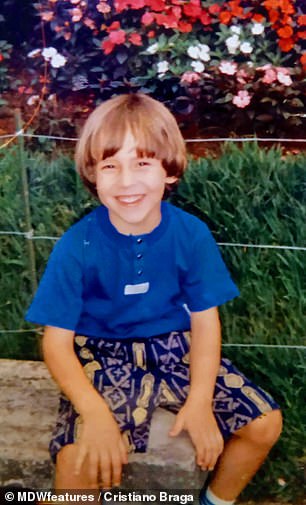 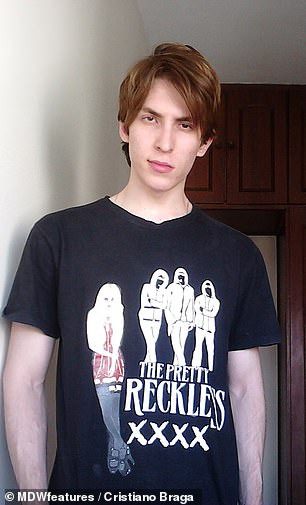 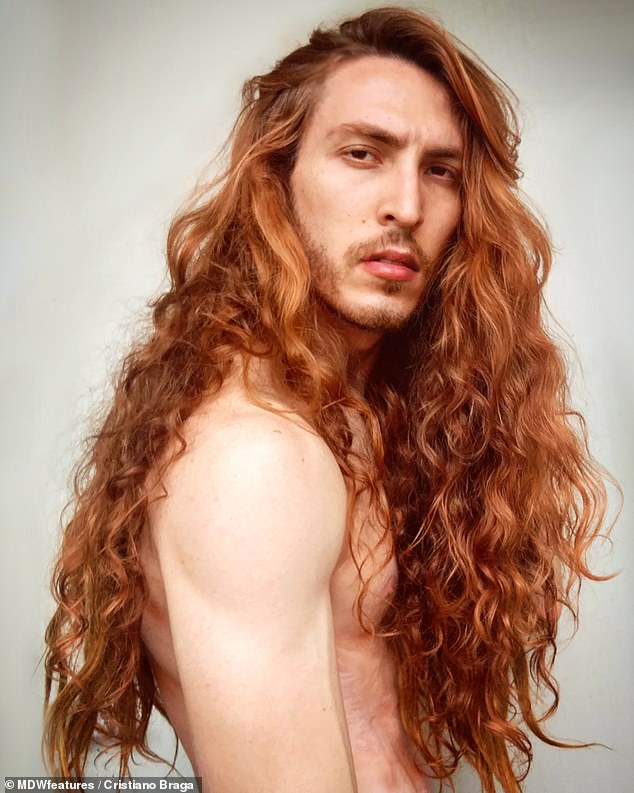 While he doesn’t know why he had the desire to grow his hair, he says his grandmother believes it’s due to his indigenous ancestry.

Cristiano says that, for now, he negotiates with his agents to keep his hair this length for his acting career.

‘I always found long hair beautiful both in women and men, I do not know why, I thought it was incredible that we all have hair the way we want it,’ he admits. 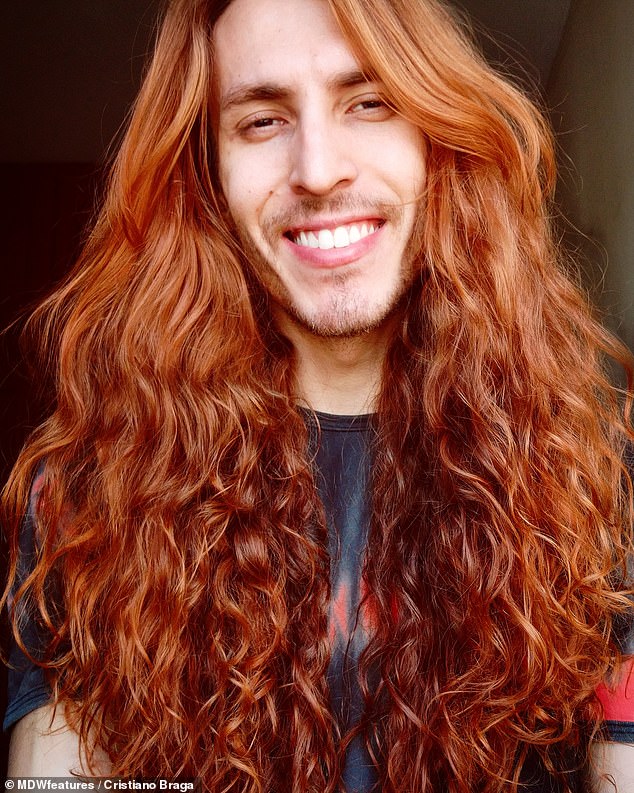 ‘Even though I wanted long hair, I was ashamed, as I was concerned about being bullied in school. My grandmother says that my desire to have long hair is due to my indigenous ancestry.

‘My grandmother’s grandmother was indigenous and had her hair down to her feet. It may be something spiritual or cultural.

‘It seems that my hair protects me from the bad things in the world, I feel much stronger and more confident. 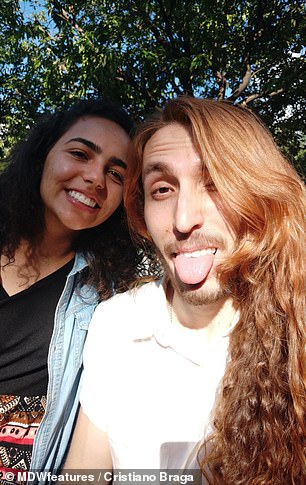 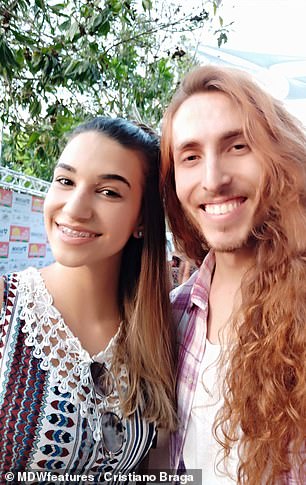 Cristiano, pictured with two female friends, says men have accused him of trying to ‘turn’ women 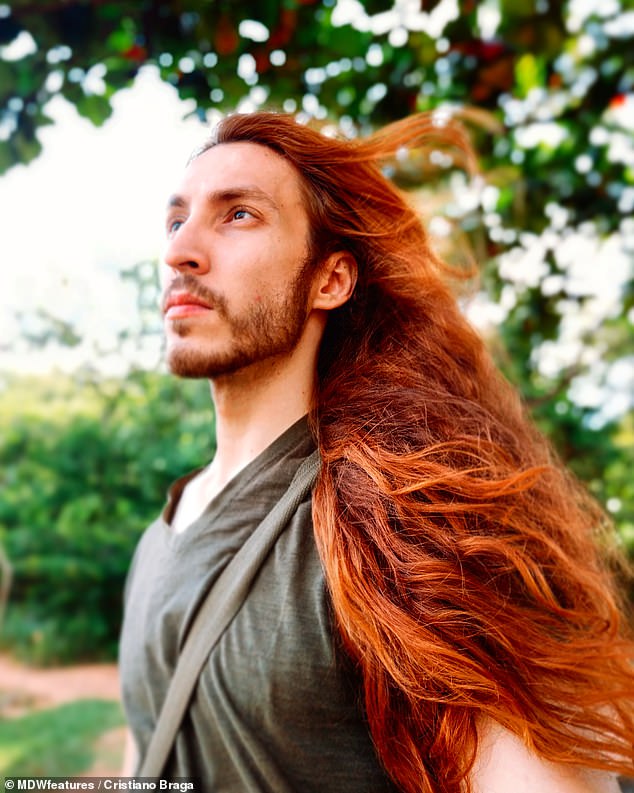 Showing off his long wind-swept hair, Cristiano said it’s taken him seven years to get his flame red locks this long

‘For me I would continue growing, without limits, but I am an actor, and in case I have to do some work, where I have to cut my hair, unfortunately I will have to do it, but until now I have managed to negotiate.’

Cristiano says having long hair is an ‘incredible experience’ and has taught him to value himself and have more confidence without worrying about the opinions and criticism of others.

‘Life passes by very fast for us to live our lives according to others, so we must live for ourselves and as we wish,’ he says. 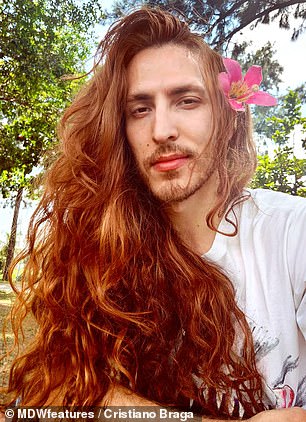 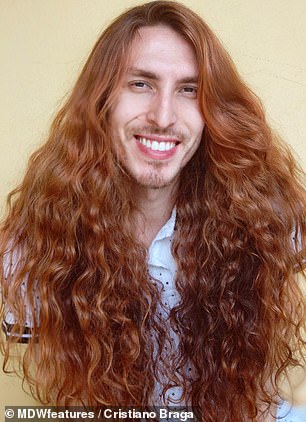 Actor Cristiano said he has always found long hair beautiful both in women and men, and he calls having it an ‘incredible experience’ which boosts his confidence

‘Now, many find it cool, and use my hair as inspiration to let their hair grow. Others who are more normative, find it strange for a man to have great hair.

‘Have patience; hair takes its time to grow and people will criticise you, so do not get discouraged.

‘Do what you want, the hair is yours, life is yours, enjoy your way, be happy.’