‘I can’t wait for the day we get to walk down the street holding hands again’: Man, 25, left unable to talk and bedridden by brain haemorrhage wows fiancee by walking unassisted

A 25-year-old man who was confined to a wheelchair after suffering a severe brain haemorrhage – and told his condition would only deteriorate – has found the strength to get back on his feet again.

Sam Hensman, from Adelaide, was left unable to walk or talk after he was diagnosed at the age of 23 with arteriovenous malformation (AVM) – a tangle of abnormal blood vessels connecting arteries to the brain.

The family were told there was nothing they could do as he would continue to suffer bleeding of the brain until he declines into a vegetative state or die.

But against all odds, the brave young man has started walking unassisted after he took some steps on his own in a remarkable recovery.

His fiancee Tess Delony – who he proposed to with a smile after she stayed by his hospital bedside during his 10-month battle – was now hopeful about their future together. 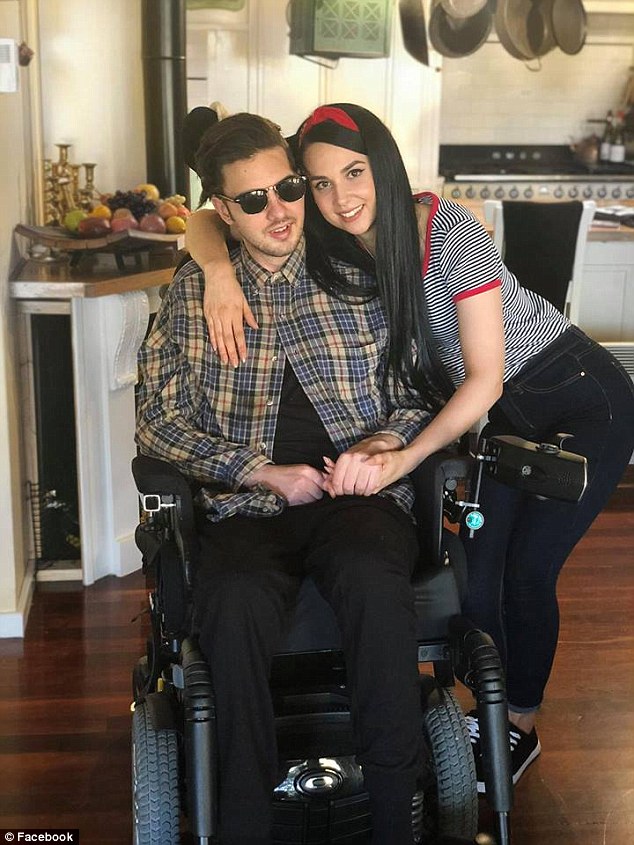 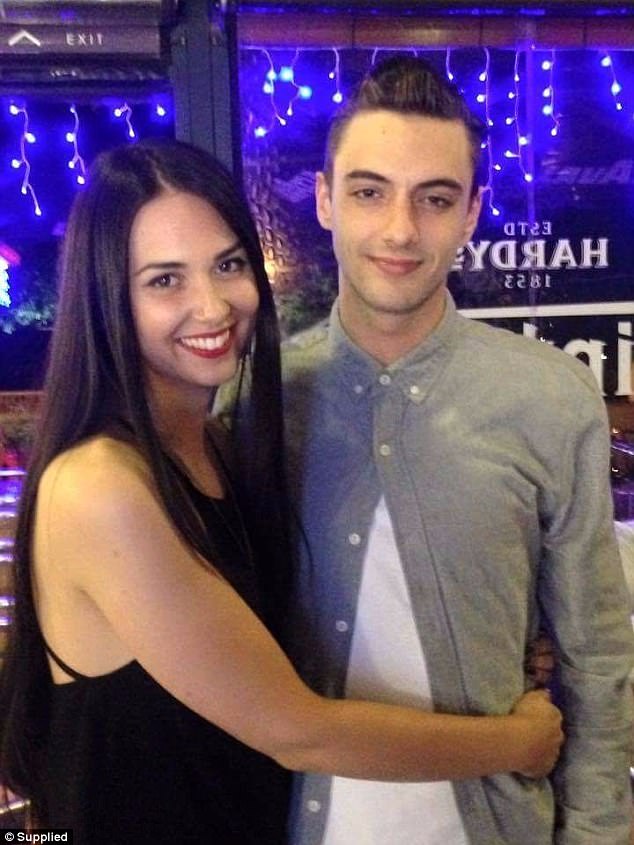 ‘I can’t wait for the day we get to just walk down the street holding hands again, and it’s moments like this that really make me feel like that dream isn’t all that far away,’ she said.

Family and friends have been documenting Sam’s remarkable journey on a Facebook page called Get Sam Hensman On His Feet Again.

‘Tiredness is always a big factor after a brain injury…so walking is very tiring,’ one post read.

‘Sam practices small walks each day by holding onto the kitchen stool and sliding it across the floor.

‘He is also still trying very hard to re-learn to talk and now uses his finger to lift his lower lip up to meet his top lip to say “mum”… lots of tears of joy here.

‘We are so proud of his achievements.’ 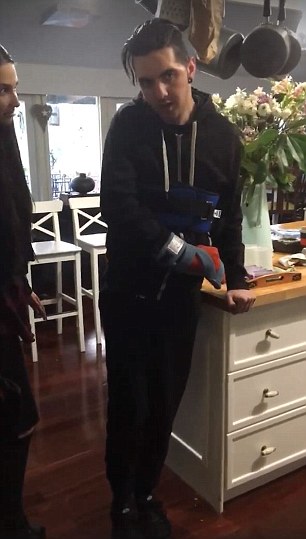 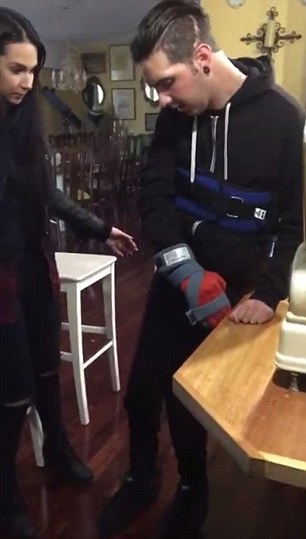 But against all odds, the brave young man has found the strength to get back on his feet again after he took some steps on his own

In April, Sam surprised his family and friends when he remarkably took his first steps.

‘Sam’s core muscles are getting much stronger and he is now standing more evenly with weight on both legs,’ the post said.

‘We did some standing and he was practicing lifting his left leg up and down while staying upright and balanced, leaving his previously paralysed right leg to take all his weight.

‘Of course, Sam being Sam loves to surprise us… he suddenly determined to take his first steps alone pushing the stool along to balance a little as he went.

His progress comes just a year after his fiance revealed why she made a selfless commitment to be with him for the long haul.

Tess said ‘yes’ when Sam proposed to her with a smile and an amethyst ring last year. 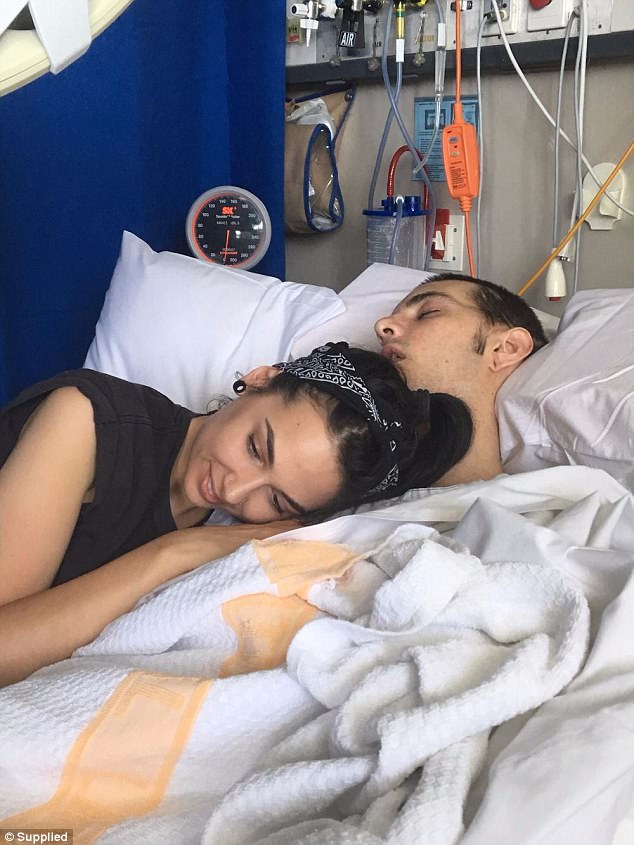 ‘After getting to know him and spending a lot of time with him, I guess going through all of this with him… Yeah, he’s the only man I want ever,’ she told Sunrise.

Just two months into their blossoming romance, Mr Hensman was rushed to hospital after he began experiencing dizzy spells, vomiting and shaking.

More than two years on, Tess said she never considered ending the relationship.

‘I’d do what someone else would do for me,’ she said.

‘That’s just the right thing to do as a human being because he’s still there. I still see him, even when he was under sedatives and everything.

‘You still see little glimmers of him there and that’s enough to keep me going.’ 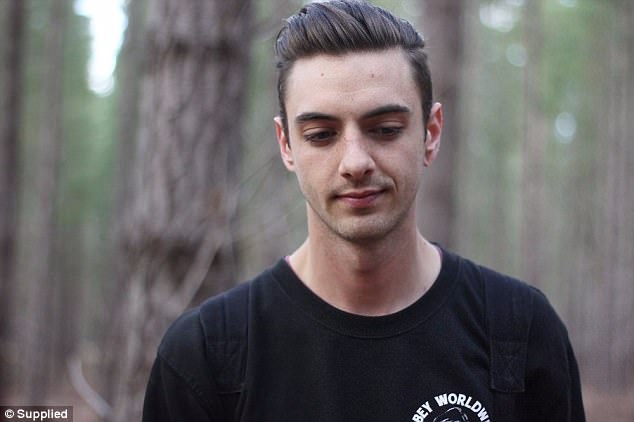 The man, who was studying to become an electrician, was rushed to hospital after he fell ill 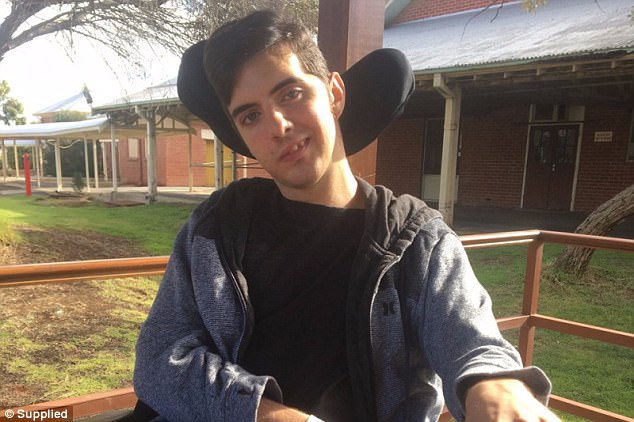 And after undergoing two rounds of life-changing surgeries, the AVM was removed

The couple put their wedding plans on hold as they prioritised his recovery.

‘There will also be a wedding on the cards eventually,’ she told The Advertiser.

‘I know that Sam would really love to be able to say his vows and to walk back down the aisle, so I’d like to wait a little while to give him the opportunity.

‘Focusing all of our time and energy on rehabilitating Sam is the most important thing right now, so we’ll just take things as they come.’

In July last year, Mr Hensman proposed to his girlfriend by smiling at her after his mother helped him pick out the engagement ring.

‘As I came over he pulled out the little black box with this big smile on his face,’ Ms Delony told nine.com.au.

‘I started to get a bit teary because he couldn’t say, “Will you marry me?,” but the amethyst meant everything. He pulled me in for a hug and I said, “Yes” – it was really special.’