At university, I studied economics and international management, before going to Rome for a gap year in the early Eighties. My aim was to learn Italian, but I ended up meeting and marrying Elio.

We had to do seven moves for his job as an investor in start-ups — all around Italy, to Germany, America and, finally, the UK in 2001.

As a result, I put my own career on hold. I loved being a mum, yet always felt I should be doing more. I just didn’t know what. 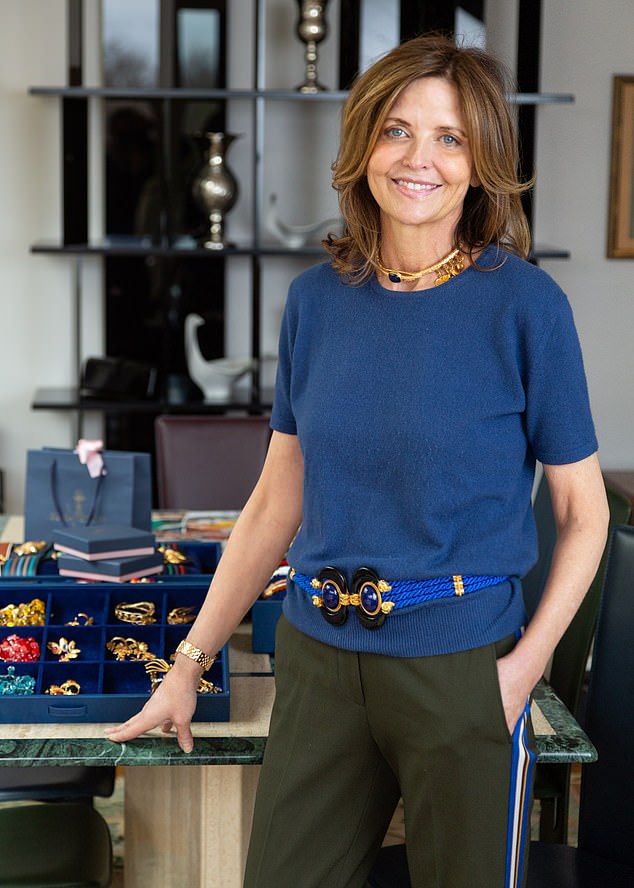 Maria Leoni-Sceti, 56, (pictured) who lives in Surrey, revealed the inspiration behind her accessory brand Sonia Petroff

Then, in November 2015, Elio’s aunt passed away. She had no children, so her husband invited us to sort out her belongings and keep anything we wanted.

And that is how we discovered an 800-piece collection of handmade belts, bags, earrings, necklaces, brooches and bracelets.

It turned out she’d been a prestigious jewellery designer from the Fifties to Seventies. I’d only ever known her as Aunt Sonia, but here were all these cuttings of her in Vogue Italia and Cosmopolitan; photos of her with Marlon Brando; and incredible collections she’d done with designers such as Balmain, Valentino and Nina Ricci.

Her designs were inspired by her travels in Europe and South America — bold and flamboyant, made with resin, glass, enamelled metal, gold overlay and precious stones.

I’d been looking for a new chapter: it was fate. So I wrote a business plan, approached a friend in Italy who hooked me up with artisans and started cataloguing all the designs, to replicate them. 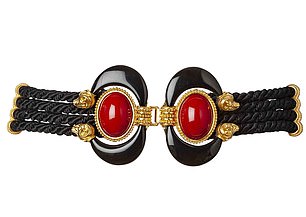 In November 2018, aged 54, I launched Sonia Petroff, a collection of jewellery inspired by her original designs, which are versatile and classic, with a modern twist — sold through our website.

Kate Moss wore one of our belts and a bracelet in Vogue; and, in August last year, Fleabag star Phoebe Waller-Bridge wore our statement red belt to the TV Choice Awards. We were inundated with customers.

We started selling on the luxury fashion website Matches in July and became a top-selling brand within a week. Prices start at £170, but we donate part of the sales to the girls’ education charity, Room to Read, in memory of Sonia — as she would not have been who she was without an education.

Sonia has helped me start a new career in midlife, which I’m so proud of. It’s really never too late to make a change.