It's the "Masked Singer" Group B semi-finals, with Banana Split and Queen of Hearts battling it out to see which of them will face off against Bull in next week's finale.

We already know the Bull is ready to fight for the Golden Mask trophy in next week’s “Masked Singer” finale, so now it’s time to see who he’ll battle. Will it be Banana Split or Queen of Hearts?

After finding outside superstar artists to duet with the Group A finalists in Jesse McCartney and Michael Bolton, “Masked” looked a little closer to home for tonight’s duet partners. None other than Robin Thicke and Nicole Scherzinger will be coming out from behind the dais to show what they’ve got alongside the semi-finalists. 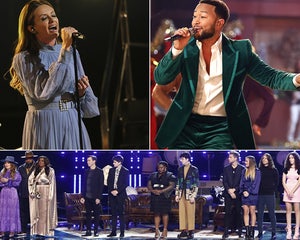 The Voice Semi-Finals 5th Judge: Which Five Advance to Next Week's Finale? Which Coach Lost All Their Artists?

We’re still scratching our heads at this one as we expected Banana Split and Queen of Hearts to have as tough a battle as Bull and Skunk did last week. Both are incredible artists who’ve brought such range and power to the stage. How could this be anything but?

That answer may never come, but this turned out not to be the vocal battle we were expecting. In fact, it was as if one of the acts was kind of throwing the game, really performing below their talent. At the same time, we know these voters can get squirrelly, so it doesn’t always matter.

So who did enough to advance to next week’s season finale and face off against the Bull? Three people entered tonight’s semi-finals, but only one act survived it.

Let’s jump right in with this week’s masks. And don’t worry, before we get to the shocking unmasking, we’re going to make you power through the terrible (and occasionally good) guesses made by our illustrious panel of Robin Thicke, Jenny McCarthy, Ken Jeong and Nicole Scherzinger first. We do this because we love … to torture you. 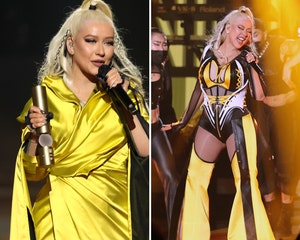 Banana Split went with a sweet classic on “Singin’ in the Rain,” which could hurt them as this is a competition. As always, Ice Cream has such an effortlessly beautiful voice and it fit perfectly on this throwback number. She even threw some tap dance in there to show off yet another talent. While it was consistently solid, as we’ve come to expect, we worry it wasn’t enough.

Guesses: This week, we got confirmation that Banana Split are a romantic partnership as well as a professional one with a smackeroo at the end of their clue package. Unfortunately, that was the only uplifting moment.

Most of it talked about the bad press they’ve experienced, as well as nasty comments (likely on social media). Banana said he was accused of being fame obsessed and an egomaniac, while Ice Cream has been called not that bright, but hey, at least she’s pretty!

Imagery in the piece, which featured throwback cars and even a black-and-white film, included the word “Rotten” on a snack food menu sign, a license plate from the Windy City in Illinois and the phrase “Brain Freeze.”

This week’s one-word clue that connects with a member of the panel tied Banana Split to Nicole with the word “Garden.” She quickly wondered if it referred to Madison Square Garden, where she’s performed before.

“I love when you plant a little seed and then you watch it grow and do great things over the years,” Banana told Nicole, which actually got her emotional. She was definitely picking up something from these clues.

And it looks like her connection was spot-on, referring to the “big-time” producer on the show where she got her start, “Popstars.” That man was the one and only David Foster. With everyone on Twitter already convinced he’s Banana, alongside wife Katharine McPhee, Nicole was fully on board with this guess.

Springboarding off of that, Ken took the Windy City clue to refer to Chicago, saying that it was Foster who helped the band reinvent their sound and revitalize their career. Robin, though, was positive this wasn’t Uncle Dave, who he grew up with. Robin said David would never come on as a Banana.

Instead, Robin was thinking maybe it’s Ryan Tedder and Leona Lewis, but he’s wrong. Jenny knows the right answer, but decided to throw out married couple Jeff Goldblum and Emilie Livingston … to fill time, maybe? We all know who this is!

Well, maybe not all of us. In a last-ditch effort to be wrong in the final weeks of the competition, there were still some on Twitter throwing around names like Aguilera and Renee Zellweger. Yes, Renee was in “Chicago.” It’s still not her. 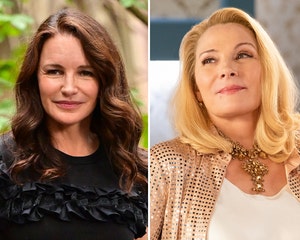 Queen of Hearts made some interesting vocal choices on this Sia track, with a few spoken line verses, a whole section in her falsetto and all of it with her signature passion. She’s been an emotionally wrought singer all season long and this was no different, You could feel all that she’s endured and overcome in this performance, the mark of a true artist!

Guesses: This week’s package saw Queen of Hearts talking about the struggles she had in life, even going so far as to share a story about a man who touched her heart by giving her five dollars so she could eat dinner that night.

It’s a hardship that so few fully understand, with her describing her existence as like that of an animal at times. All she was concerned about was food and safe shelter. In this, she said that she’s seen that the poorest people tend to be the most generous.

One image that stood out was the face of a red devil on a stop sign shape, while the rest of the piece featured her walking through the woods and living hard on the streets. All of this, of course, lines up perfectly with the well-known early struggles of Twitter’s favorite guess.

As for her one-word t-shirt clue, it connected her to Ken with the word “Wrestle.” She told him, “I’m not afraid, like you, to get in the ring and get a little bit ‘Dirrrty.’” When Nick Cannon asked if he’d had a fling with Christina Aguilera, Queen laughed that his face turned as red as the shirt.

Ken has been on “WWE Raw,” but could make no further connections. Everyone agreed that she could sing like this, but Nicole thinks the red devil may be a reference to “The Devil Wears Prada.” K.T. Tunstall sang the theme to that movie, but we’re not feeling her for this. She also threw out a bunch of Lilith Fair artists before landing on Jewel.

That’s been the online favorite for months now, and with this performance you could definitely hear Jewel’s signature sound — perhaps more than ever before — in the portions she did sing in her full-bodied voice.

There was virtually no uncertainty online with this one. Apparently while there are still outliers about Banana Split, everyone is on board the Jewel train for Queen of Hearts. Okay, one person still thinks it might be Jessica Simpson, but they’re just– well, they’re just wrong. 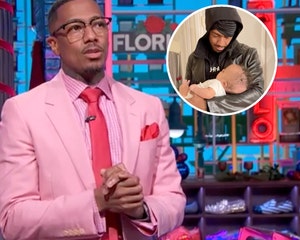 Banana Split followed one so-so performance with a duet that really just sat there and didn’t go anywhere. It’s remarkable that they basically laid down and died in the semi-finals like this. This was such a safe performance, with no dynamic vocal range and nothing at all to latch on to and get excited about. They are much better than this. And then, for no reason at all, Ice Cream added actual splits — bonus points for flexibility.

Queen of Hearts again brought a lot of passion to her performance, matched by Nicole giving it her all. The falsetto runs didn’t quite work at all when Nicole shifted up an octave, but “Dream On” is a massive undertaking and they really did manage to make it their own, share the spotlight and bring out the best in Queen. She admitted that she’s never met Nicole (and they prepared separately) making their duet even more impressive. 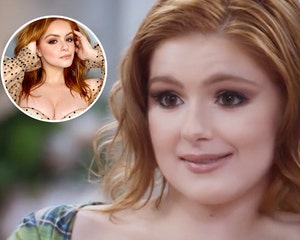 We thought this was going to be closer than it was, but it looks like Banana Split might have to settle again for second best, if she is who we all think she is. And it’s not even quite as high as she landed on “American Idol,” because there’s still Bull to consider.

Ultimately, though, Queen of Hearts has killed it with range, diversity and powerfully emotional performances week after week. Banana Split has had incredible moments, surprising moments and then not-so-great moments. Tonight was not so great, and so this should be easy.

Setting up what should be an incredible final showdown, Nick declared Queen of Hearts the winner, sending Banana Split to a second-place finish in Group B.

For contenders who went deep in the competition, this may be the best guessing from our panel we’ve seen since they figured out Wendy Williams in her first week. Obviously, this is the right guess. Twitter has been on it, and three out of four panelists can’t be wrong, can they?

Of course, they can’t. Katharine McPhee & David Foster have been fantastic throughout this season — well, mostly — and really proved why she’s one of the strongest vocalists to come out of the “American Idol” machine. There’s a reason so many were upset when she lost.

With this unmasking, Jenny, Ken, and Nicole all got extra points toward the Golden Mask trophy, which puts Ken and Nicole in the lead with — ahem — two points. That title all comes down to next week’s finale, with two more shots at points.

“The Masked Singer” crowns its winner next Wednesday at 8 p.m. ET on Fox. 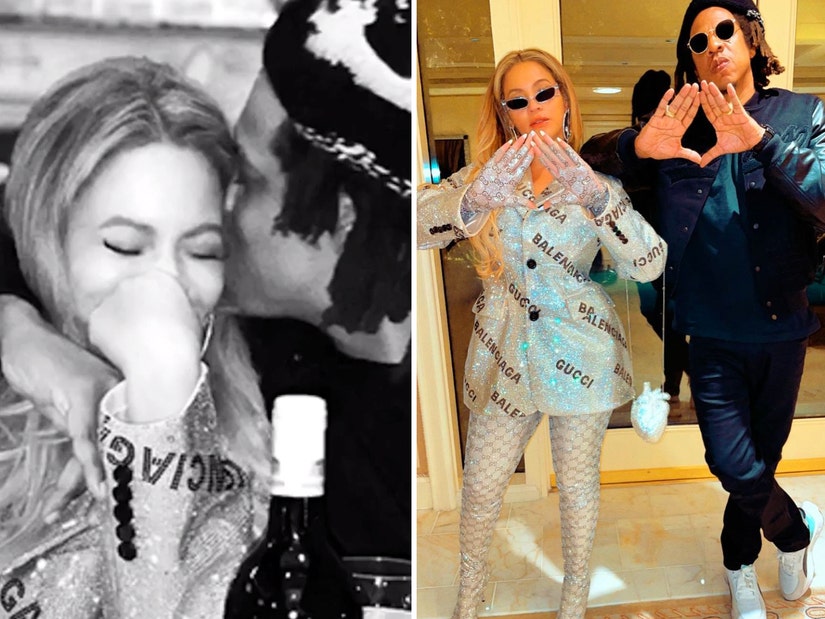