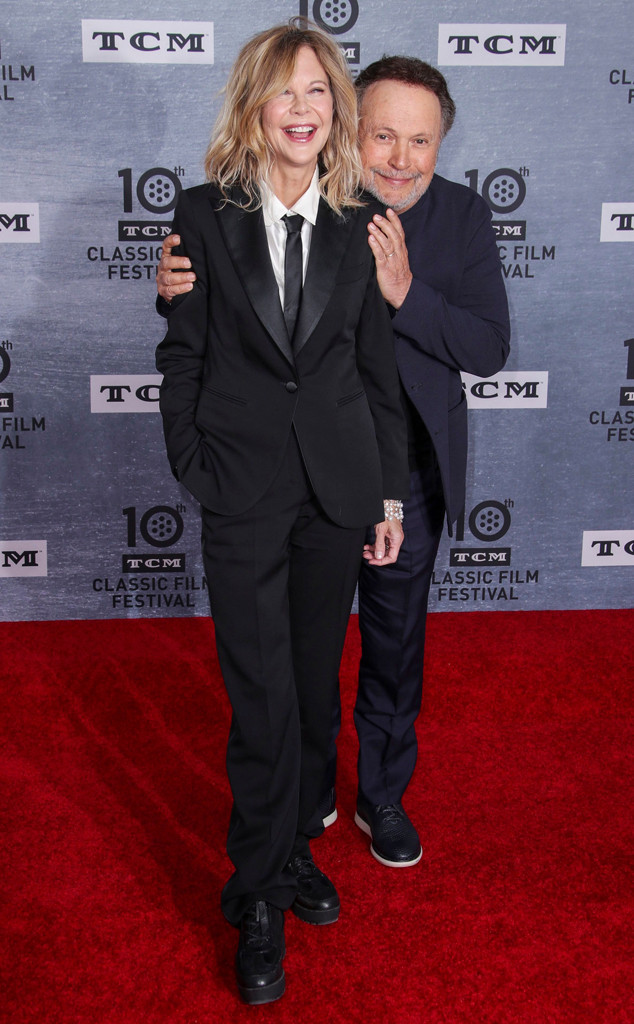 Meg Ryan and Billy Crystal reunited at the 2019 TCM Classic Film Festival in Los Angeles on Thursday to celebrate the 30th anniversary of When Harry Met Sally with a special screening.

The 57-year-old actress donned a black and white suit and tie while the 71-year-old actor donned a navy jacket and dark pants. The former co-stars were all smiles on the red carpet and posed lovingly next to one another.

Ron Reiner, the director of the film, also attended the big event and discussed a few of the movie’s most famous scenes, including the one where Ryan’s character fakes an orgasm in the middle of Katz’s Delicatessen. Reiner said Ryan was the one who suggested acting out the orgasm versus simply discussing it with Crystal’s character.

“What Meg doesn’t realize is she had to do it in front of all of these strangers,” Reiner recalled. “There’s Katz’s Deli, and there’s the crew, and the extras and everything. The first couple of times she did it good…but it needed more….So I said, ‘Meg, let me show you what I want.’ I sat down opposite Billy.”

Crystal then joked Reiner pretended to have an orgasm that “Mighty Joe Young would be proud of.” After that, Reiner got the scene he wanted.

“You had some good sounds there, Ron,” she said.

The trio also talked about their four-way call scene with Carrie Fisher and Bruno Kirby. Reiner said the scene took about 60 takes because everyone was on camera at the same time and the cameras couldn’t cut away if there was a mistake.

When Harry Met Sally hit theaters in July 1989 and received an Academy Award nomination for its screenplay.

Here’s hoping fans don’t have to wait quite as long for the next reunion.