Another day, another Mouret! Meghan dazzles in a dove grey dress by her fashion designer friend Roland and a £4,000 Fendi bag on day two of her Dublin visit with Prince Harry

He was rumoured to be designing the royal wedding dress, but even though Roland Mouret didn’t make the cut on her big day, the designer is clearly still one of Meghan’s favourites.

The Duchess of Sussex , 36, looked typically glamorous as she kicked off a second day of engagements in Dublin with a visit to the official residence of President Michael D Higgins.

Meghan is a known friend of Mouret’s with the French designer making appearances on her now deleted Instagram account so it came as no surprise to see her her opt for one of his pieces today.

He was among the designers tipped to make the royal wedding dress, although Givenchy was its eventual creator, though Meghan was spotted wearing a £1, 350 Mouret on the eve of her nuptials, strikingly similar to the one worn today.

When it came to her accessories the newly-wedded royal stuck simple black accents in the form of a suede shoe and an oversize leather handbag.

The black leather tote is by designer Fendi and costs an eye-watering £ 3,850.00. 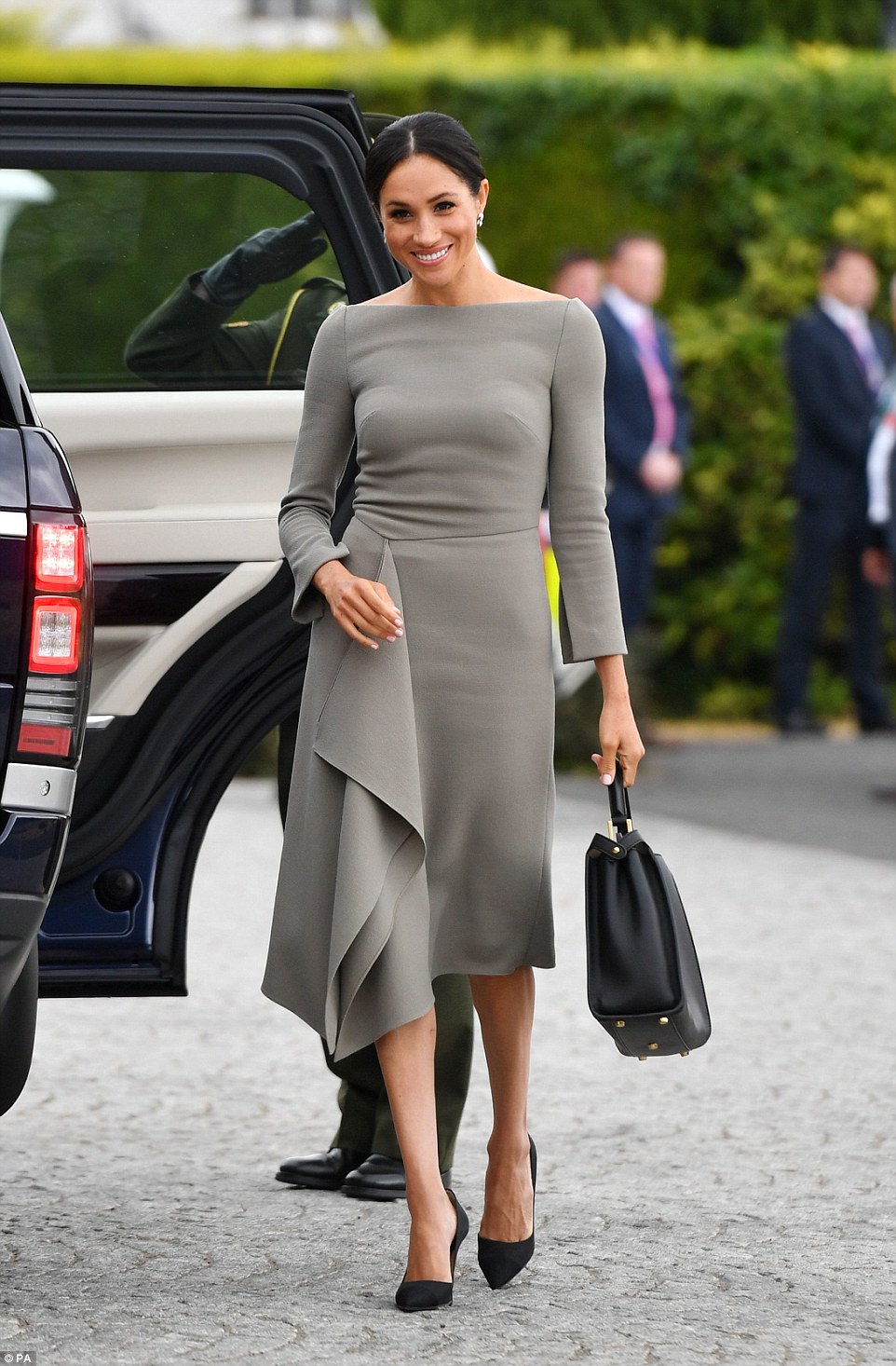 This is rather a big departure from the royal’s typically ‘affordable’ handbag choices with each and every bag she has carried from Scottish brand Strathberry, including the one she carried yesterday, selling out within hours.

For her engagement this morning the newly-minted Duchess opted for an old favourite when it came to her hair, sweeping her hair into a sleek bun as she is wont to do of late.

She did showcase a flash of bling with a pair of elegant diamond earrings as she took Harry’s arm before meeting the president.

Harry and Meghan arrived at Aras an Uachtarain in the city’s Phoenix Park at 9.30am.

The meeting with Mr Higgins and his wife Sabina was the first stop in a packed itinerary for the royal couple on Wednesday.

For her engagement this morning the newly-minted Duchess opted for an old favourite when it came to her hair, sweeping her locks  into a sleek bun as she is wont to do of late 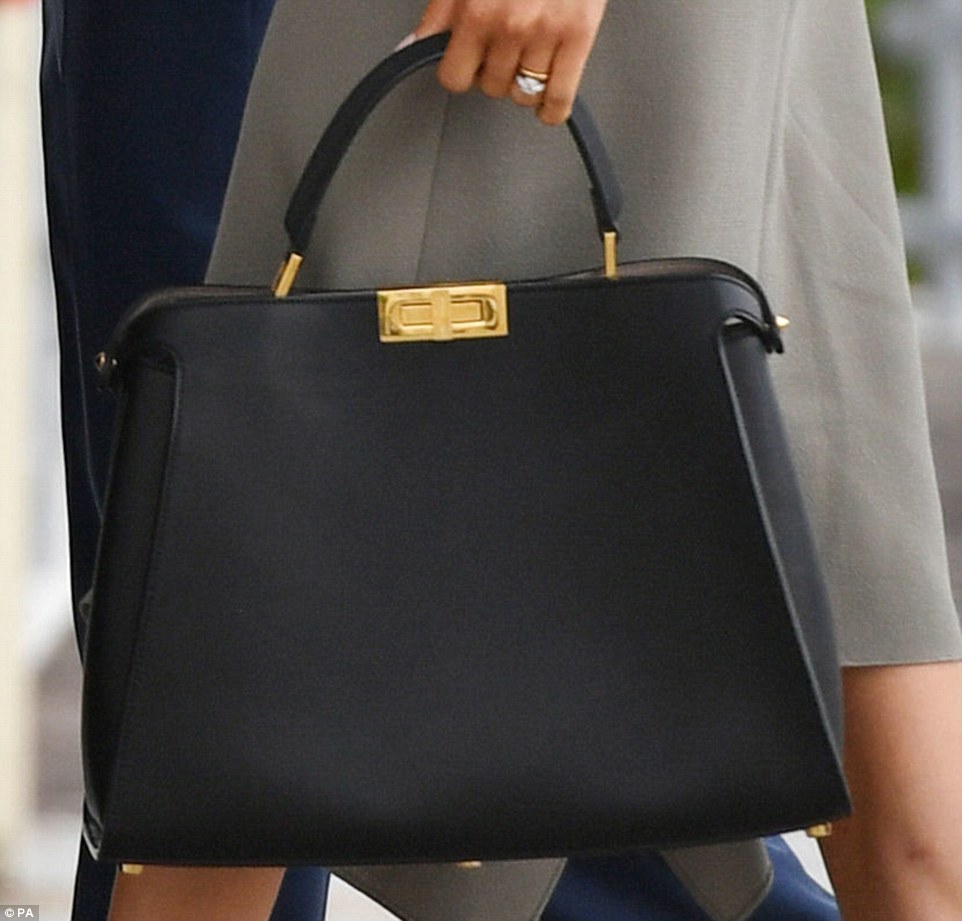 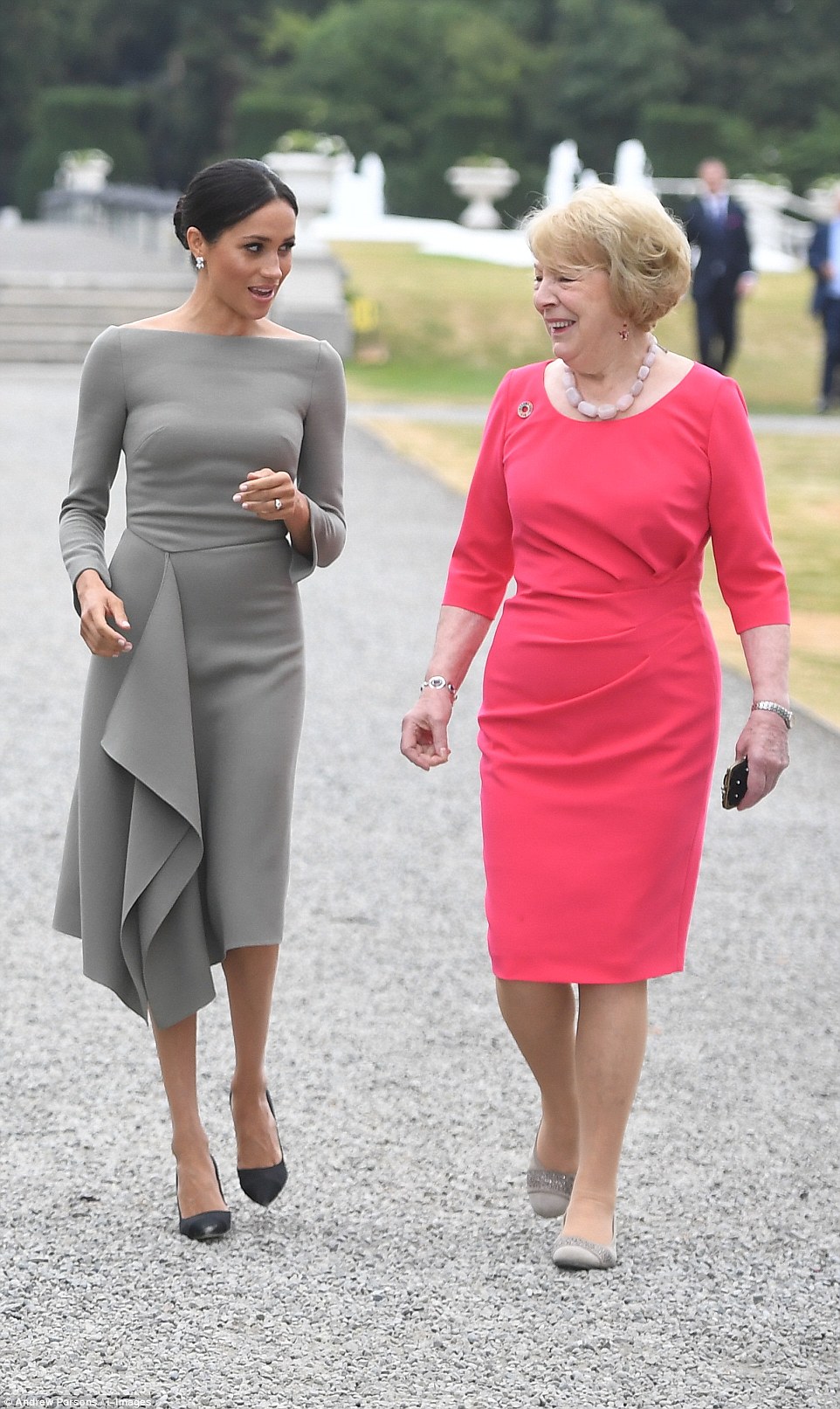 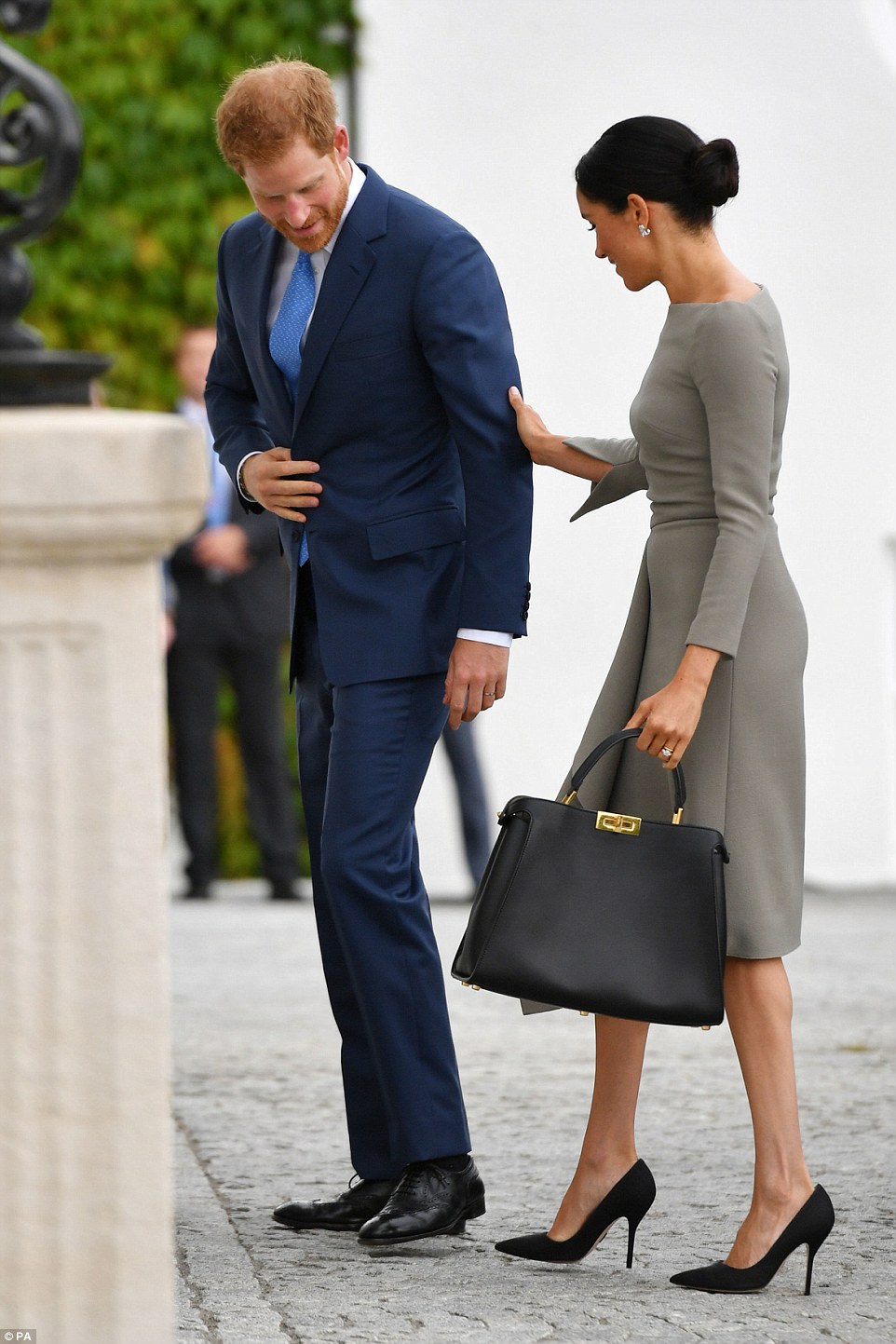 Well-connected Meghan has a close bond with the French designer and, as well as choosing his glamorous designs for red carpet appearances, Meghan has given him a string of social media shout-outs.

The Duchess and the designer first became friends years ago when the pair met in a hotel lift in Istanbul.

‘This man in a bathrobe said, “I’d love to dress you”, I thought “whaaat?” Then he told me who he was and we’ve been friends ever since’ she previously said.

A fashion magazine editor previously told WWD that the pair ‘clearly had an affection for each other’ – and that certainly seems to be the case if Meghan’s gushing Instagram posts are anything to go by.

After a dinner in honour of the fashion tycoon, she wrote: ‘So much love for you @roland_mouret – love your dresses to the moon and back, but love you even more #fashion #favouritedesigner.’

And in a cosy selfie with the designer last year, she wrote: ‘Because lunch with @roland_mouret is the very best kind of lunch.’

Mouret was among the designers tipped to make the royal wedding dress, but Meghan eventually selected Givenchy. 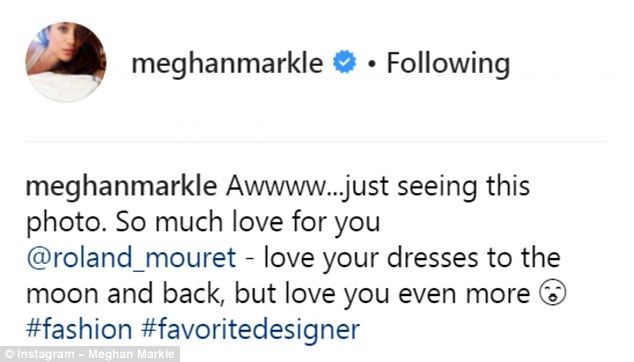 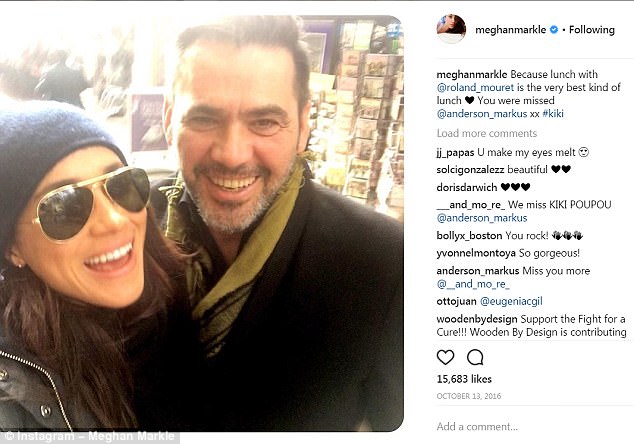 A gushing Instagram post from October 2016, just weeks before her romance with Prince Harry was revealed, sees the star in a cosy selfie with the French designer

The Duke and Duchess of Sussex are visiting Ireland from Tuesday 10th July to Wednesday 11th July having arrived in Dublin on Tuesday evening.

Meghan had a hectic day yesterday, commencing with RAF centenary celebrations in London before jetting to Dublin for her first official overseas visit, but the Duchess of Sussex managed to keep the style stakes high with three outfit changes.

Meghan was wearing a green Givenchy top and pencil skirt for her arrival in the Irish capital, but changed into a chic black midi dress by Emilia Wickstead with a square neckline for a garden party at the residence of the British Ambassador to Ireland. 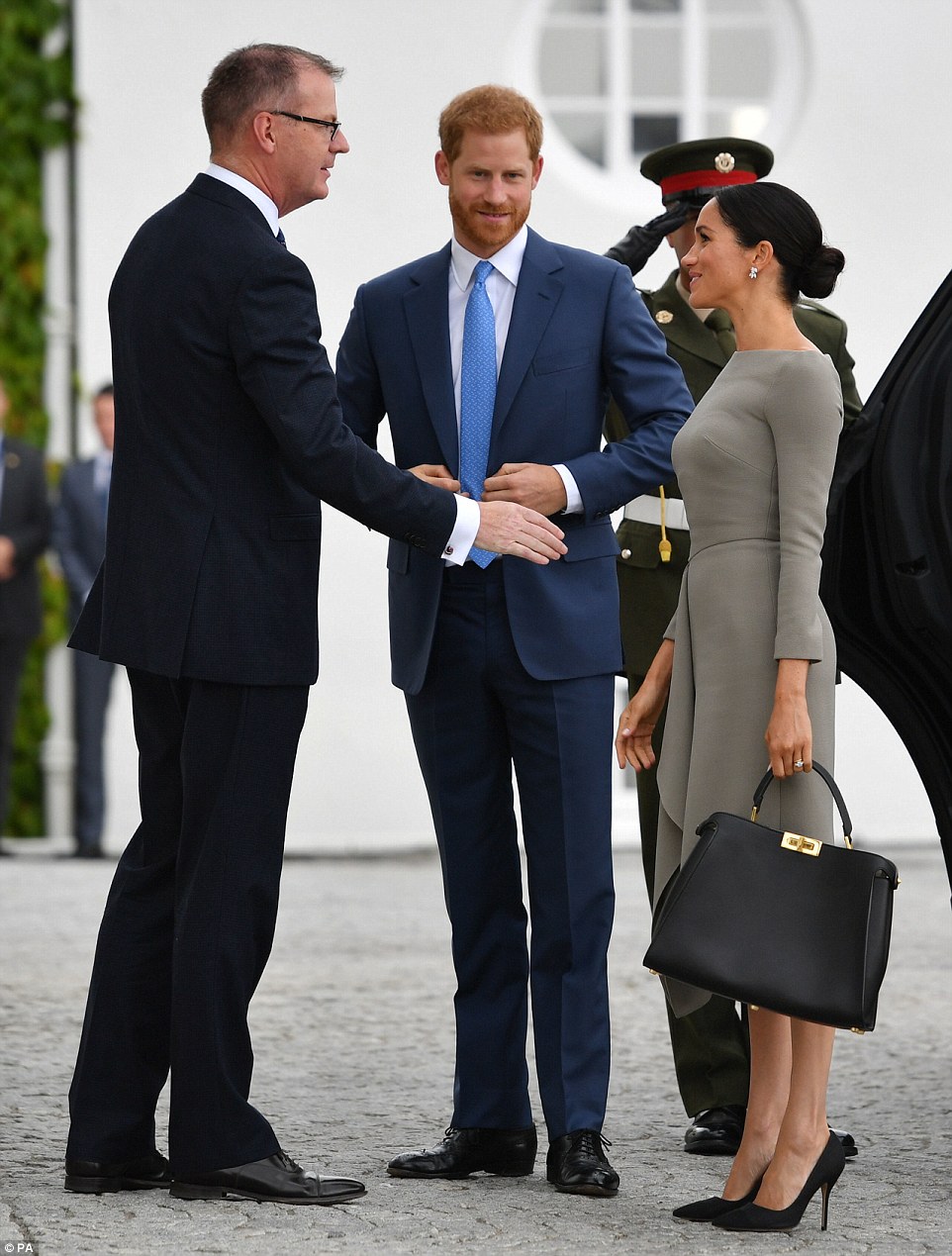 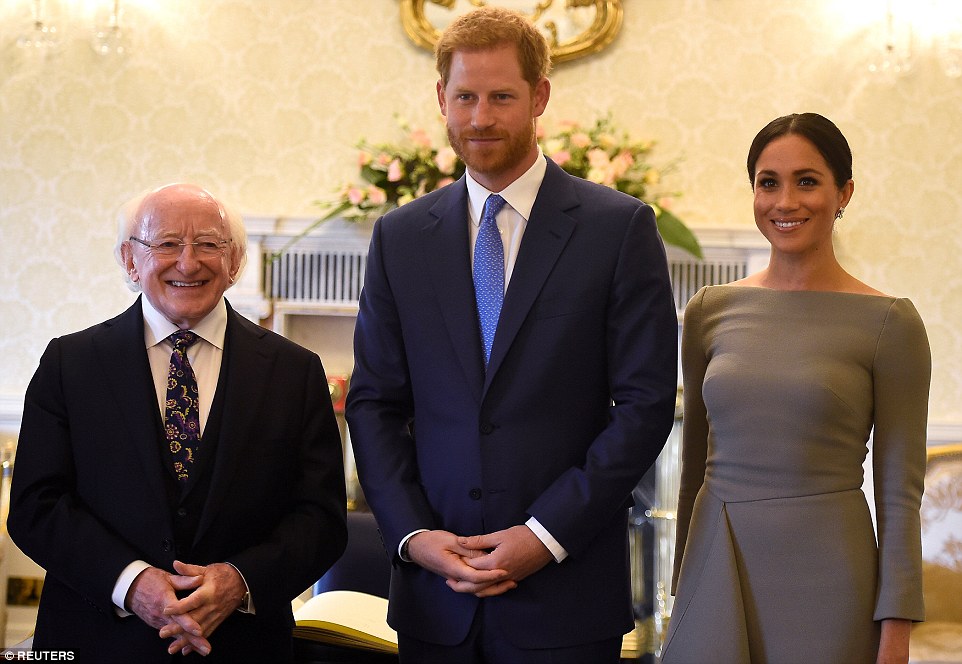 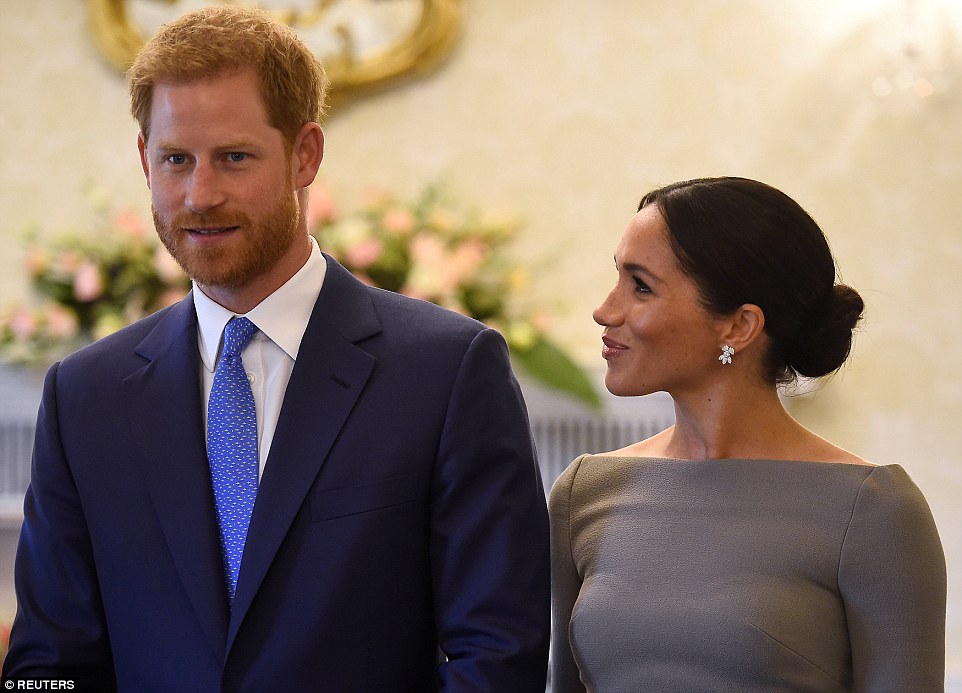 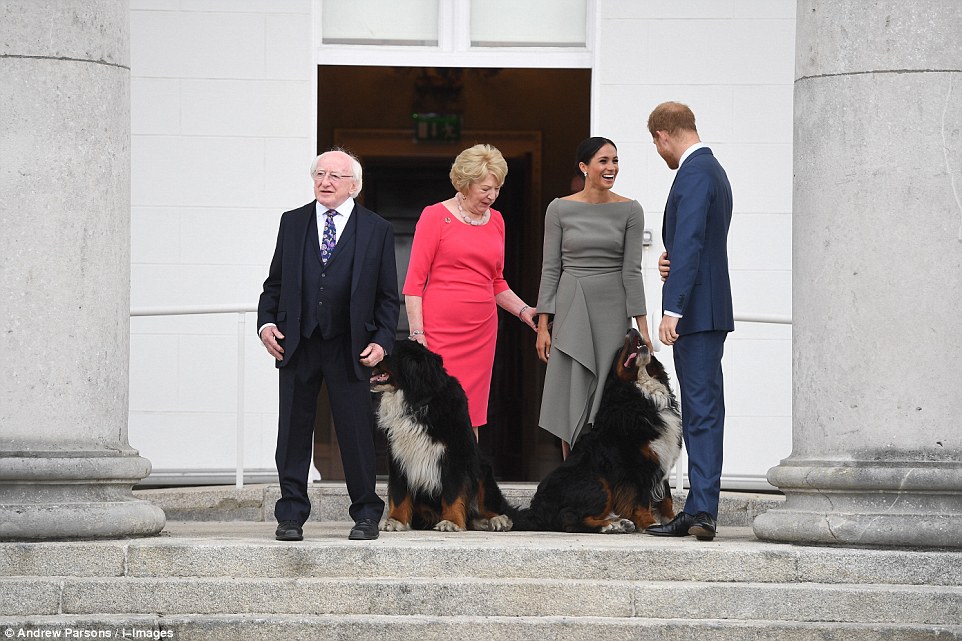