How Meghan Markle is Honoring Princess Diana at the Reception 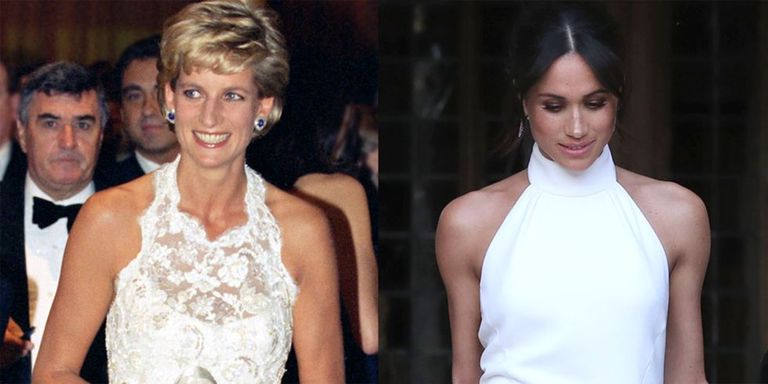 While we’ve been gushing all day over Meghan Markle’s classic Audrey Hepburn-inspired wedding gown, but her second look of the day also pays homage to another icon—Prince Harry’s late mother Princess Diana.

For the black-tie reception, Markle, now officially known as the Duchess of Sussex, changed out of her custom wedding dress by British designer Clare Waight Keller for the house of Givenchy and into a white halter by another Brit designer, Stella McCartney. McCartney also outfitted some of the day’s most well-dressed guests like Oprah and Amal Clooney.

Markle’s bespoke Stella McCartney look featured a high collar neck and body-skimming A-line silhouette. For the occasion, Markle’s hair was fixed into a tighter updo than the one we saw at the wedding ceremony—and she topped off her look with an aquamarine cocktail ring gifted to her from Prince Harry, that used to belong to Princess Diana.

Markle drew comparisons to Lady Di and a dress she wore in the mid ’90s to a gala in Washington D.C. Diana often gravitated towards evening wear that showed off her arms and fabulous figure, whether it was a halter neck, one-shoulder or strapless gown.

Prince Harry was only twelve years old when he lost his mother in a tragic car crash, but he has still found many ways to incorporate her memory and honor her during this momentous occasion in his life. Markle’s engagement ring famously features two diamond’s from Princess Diana’s jewelry collection. They also incorporated white garden roses, Diana’s favorite flower, into the decor for today’s charming ceremony.