She certainly has a way with words! How Meghan once gushed about the ‘mother f**king fantastic’ food in New York – saying it is how the city keeps her ‘wrapped around its little finger’

Meghan Markle may have been born and raised in Los Angeles, but the former actress has a longstanding love for New York City — especially it’s ‘mother f**king fantastic, crave-worthy food.’

The 37-year-old royal’s choice to meet with friends and have a baby shower in the Big Apple in the middle of winter may seem like a surprising decision, considering her mother, Doria Ragland, is still based in California, but she has written about her passion for the city before.

Two years before she met Prince Harry, Meghan penned an ode to New York City — and its culinary cuisine — in a cheeky June 2014 post featured on her now-defunct lifestyle blog, ‘The Tig.’ 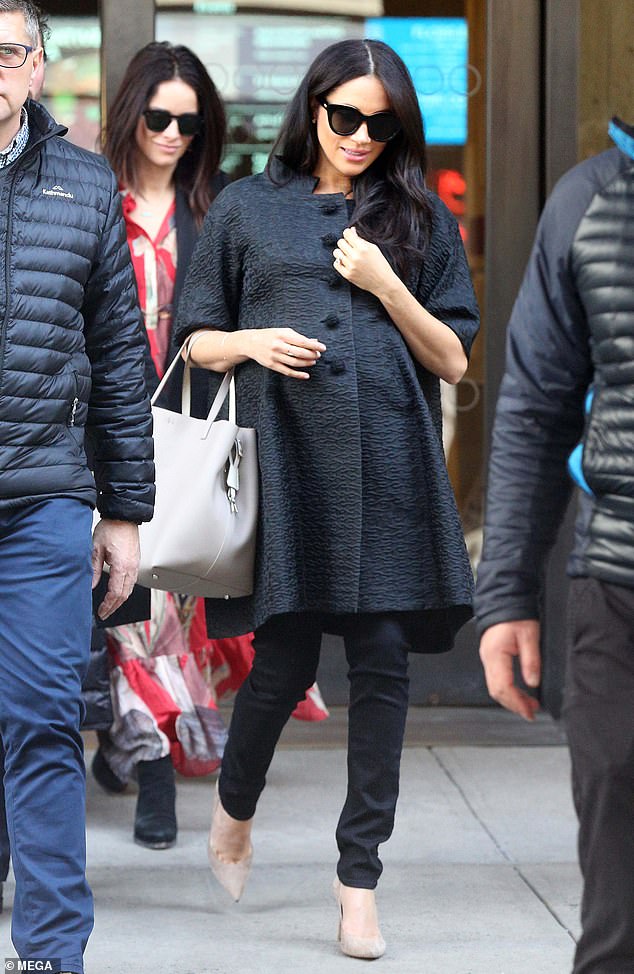 City girl: Meghan Markle was seen cradling her baby bump as she left a New York City hotel on Tuesday while enjoying a five-day trip visiting he friends in the Big Apple 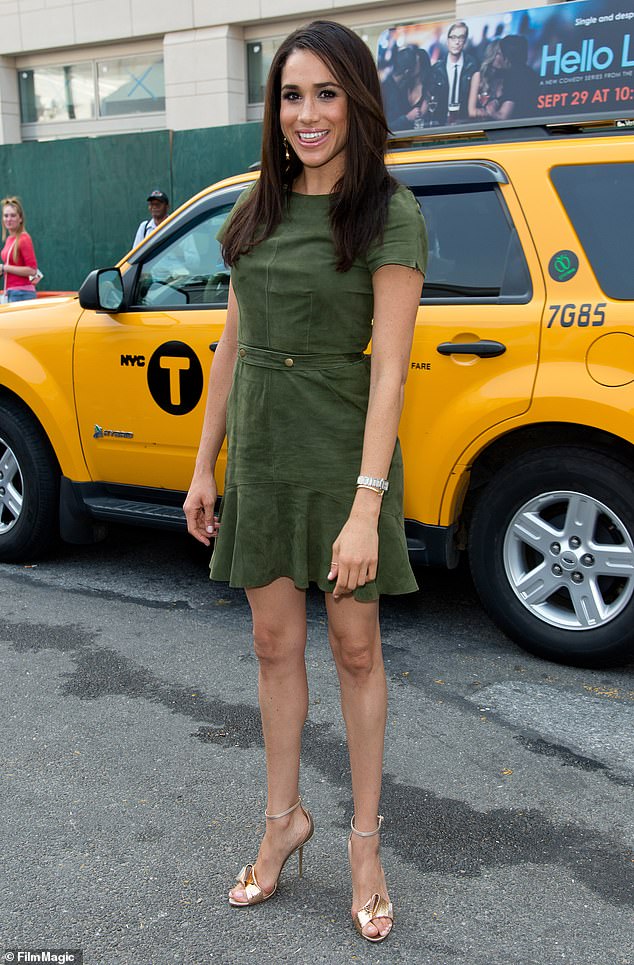 Throwback: The 37-year-old, pictured in the Big Apple in 2013, penned an ode to New York City in a cheeky June 2014 post featured on her now-defunct lifestyle blog, ‘The Tig’

‘The memories of filming the pilot for Suits, the fast frenetic energy only lulled by my morning jog through Central Park, the quintessential Manhattan bravado, the elderly ladies who lunch at Bergdorfs (draped in diamonds, nursing their martinis, watching the day go by against the backdrop of Kelly Wearstler papered walls) — these are a few of the reasons I love New York,’ she wrote, as cited by People.

‘But it’s the food, the mother f**king fantastic, crave-worthy food, that keeps me wrapped around its little finger.’

It’s unlikely that the Duchess of Sussex will ever again describe something using the phrase ‘mother f**king’ now that she is a royal, but her love of New York City is apparent in the post.

The known foodie included a list of her favorite restaurants in the post, ‘whether I have five days in the city or just 32 hours,’ including Rubirosa, a pizza spot on Mulberry Street, and Chef Jean-George Vongerichten’s eponymous restaurant that features views of Central Park.

While Toronto, Canada, was Meghan’s adopted home when she was starring on Suits, she credits the show for giving her an opportunity to get to know the ins and outs of New York City, particularly the Lower East Side.

‘I love a neighborhood that you can get lost in, always finding new nooks and crannies, interest and intrigue.’ 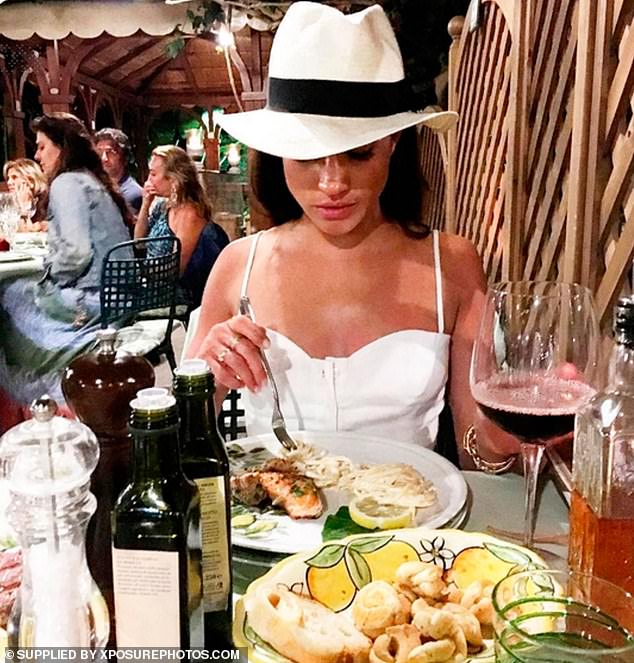 Food lover: ‘It’s the food, the mother f**king fantastic, crave-worthy food, that keeps me wrapped around its little finger,’ she wrote of the city’s cuisine 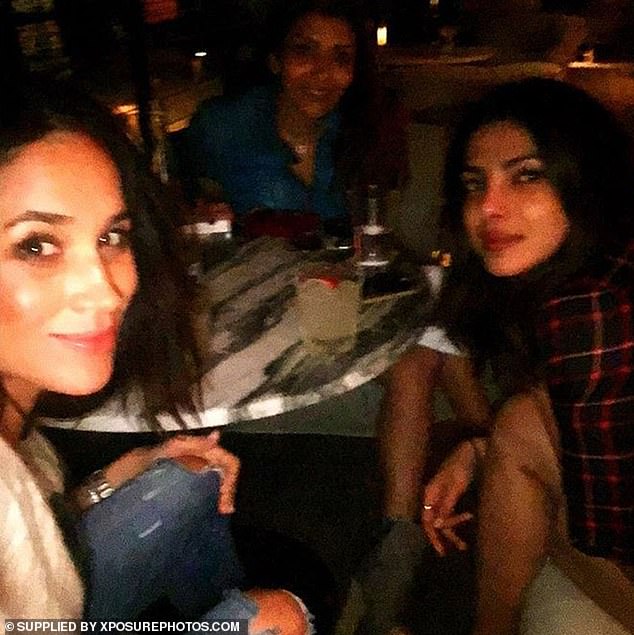 She’s a fan: Meghan, pictured with her Priyanka Chopra in 2016, named the pizza joint Rubirosa and Jean-Georges as some of her favorite spots in the city 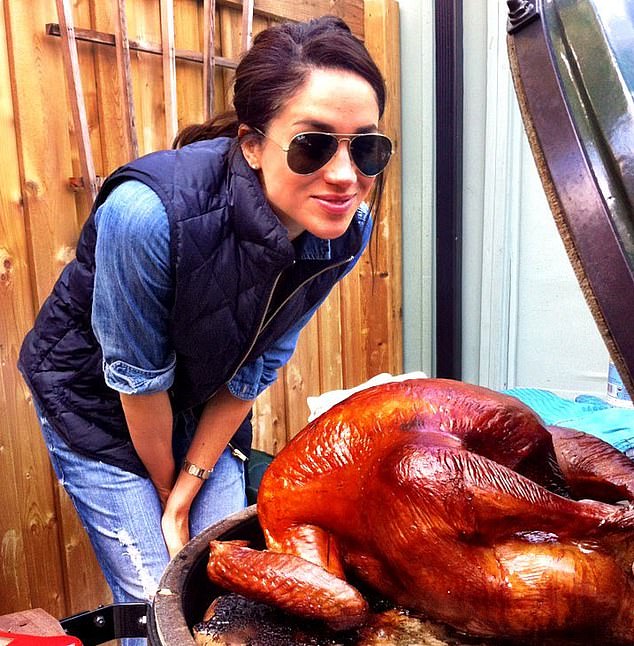 Home away from home: Meghan grew up in Los Angeles and lived in Toronto, Canada, while filming Suits, but she has a soft spot in her heart for the Big Apple

Meghan also offered up some of her favorite Lower East Side spots, including The Bowery Hotel, the British restaurant The Fat Radish, and the French eatery Dirty French.

The mother-to-be created a similar neighborhood guide for the West Village for Citiphile, revealing The Marlton Hotel is one of her favorite places to stay.

‘This chic spot couldn’t be in a better location and offers everything from coziness by the fire to charming bedrooms to a fabulously smart restaurant,’ she said. ‘I love the penthouse with its herringbone floor and claw-footed tub. Grab a cocktail at Margaux pre-dinner!’

She called the New American restaurant Joseph Leonard her go-to date night spot, noting it ‘is dimly lit and so tiny that you simply must snuggle up to your date.’ She also referenced the West Village favorite Fedora — which she praised for its dirty martinis.

In her interview with Citiphile, Meghan happily reflected on her ‘ultimate’ New York City moment, which involved her close friend Serena Williams.

‘After attending back-to-back shows during NYFW, I hopped in a car and went straight to Flushing to cheer on Serena at the women’s finals of the U.S. Open,’ she recounted. 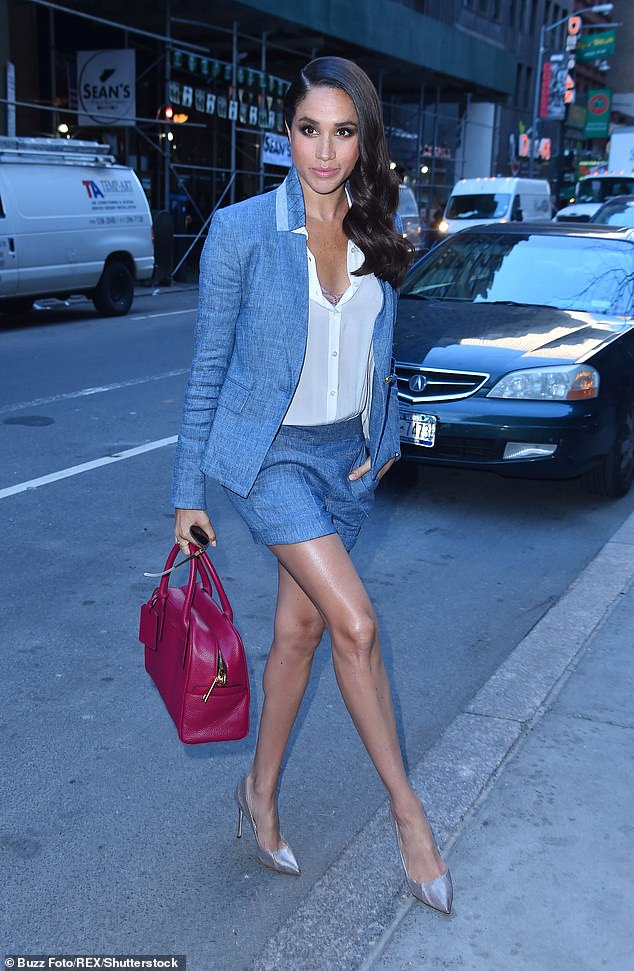 Start of it all: Meghan said she really got to know New York City while filming the pilot of Suits 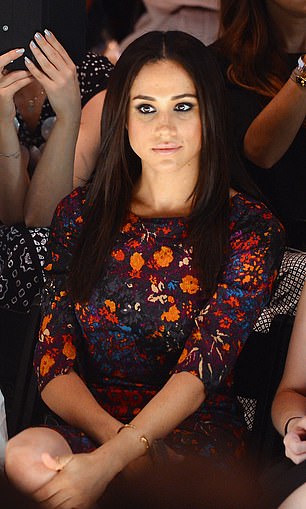 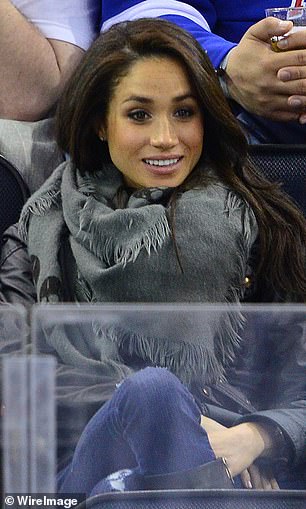 Back in the day: Before she became a royal, Meghan attended New York Fashion Week and enjoyed a New York Rangers hockey game at Madison Square Garden in 2013

Fond memories: Meghan said her ultimate New York City moment was attending back-to-back fashion shows  before hopping in a car to cheer on Serena Williams at the U.S. Open

‘The fact that your day can take you in a million amazing directions from couture to court side is simply fantastic; only in New York.’

Although it seems Meghan prefers downtown locations, she is believed to be staying at The Mark hotel on New York’s Upper East Side.

The seven-months pregnant royal was seen cradling her baby bump as she made her way into the Met Breuer on Tuesday, which is just a few blocks away from the hotel.

The Mark is reported to be the venue of the intimate baby shower that is being hosted by 15 of her nearest and dearest friends.

Moments earlier, Meghan was pictured walking out of the hotel, surrounded by security and several plainclothes protection officers.

Other than her impressive security detail, the royal appeared to be along as she made her way past photographers and into a waiting SUV that had Department of State license plates.

Her friend Abigail Spencer, also 37, was seen leaving the hotel not long after, presumably to join the duchess for an afternoon of culture at the Met Breuer museum — which may well be serving as the starting off point for the baby shower festivities.

Out and about: The Duchess of Sussex and her close friend Jessica Mulroney (pictured in 2016) enjoyed macarons at Ladurée in SoHo on Saturday 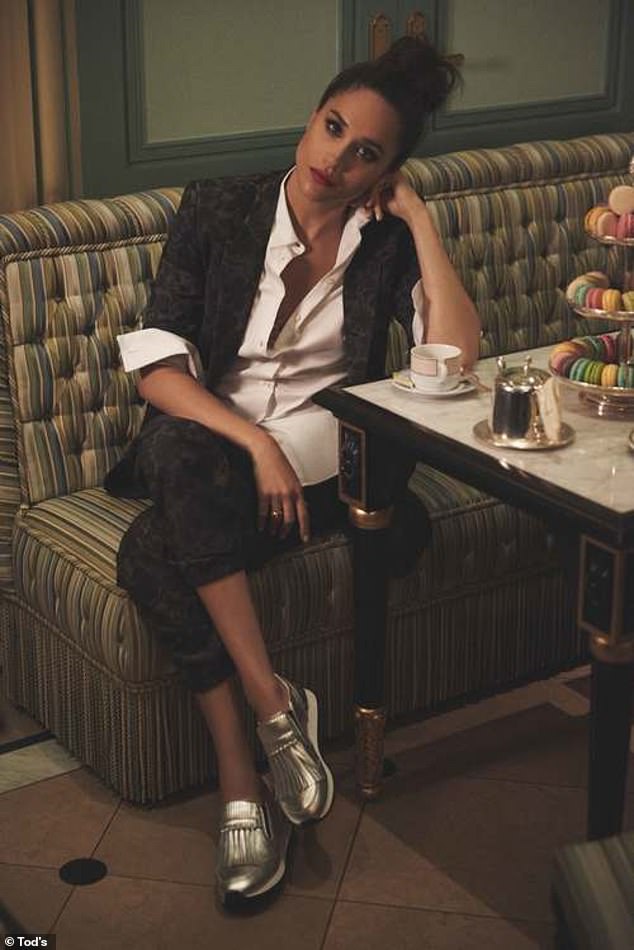 Way back when: Meghan once did a photo shoot for the fashion brand Tod’s in the ornate French restaurant

Taking advantage of the bright and sunny day in the Big Apple, Meghan wore a chic, lightweight gray coat for her surprise outing, pairing the outerwear with some skinny black jeans and nude suede heels.

She accessorized her ensemble with a pair of dark sunglasses, which hid much of her face from the cameras, and was seen carrying a dove-gray handbag in the crook of her right arm while the other hand was planted firmly on her large bump.

Meghan was accompanied on the trip by what appeared to be several members of hotel security, as well as a handful of plainclothes police officers, including the same man seen escorting the mother-to-be out of a Manhattan apartment on Monday evening.

On Monday night, she attempted to go incognito as she covered up in a cap and long navy Victoria Beckham overcoat and a gray newsboy cap pulled down over her dark brown hair.

While the Duchess of Sussex appeared to be making an attempt to go under the radar in her low-key ensemble, the large diamond engagement ring on her wedding finger was unmistakable.

Her husband had the three-stone design made for her especially ahead of their engagement in 2017, using one diamond that he sourced in Botswana, where the couple holidayed together early on in their relationship.

Meghan returned to the Big Apple over the weekend to spend time with her girlfriends before the arrival of her first child this spring, and she was seen being escorted into an SUV by a royal protection officer on Monday evening.

The royal is understood to have flown into the city on Friday for a surprise five-day trip after spending a quiet Valentine’s Day evening with her husband, Prince Harry. 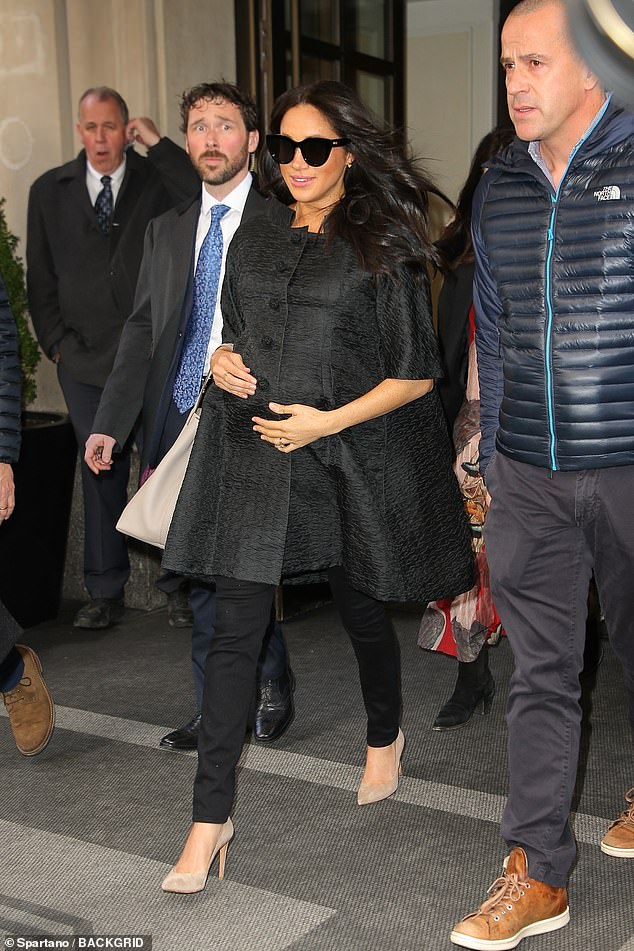 On the move: Although it seems Meghan prefers downtown locations, she is believed to be staying at The Mark hotel on the Upper East Side, where she was seen leaving on Tuesday 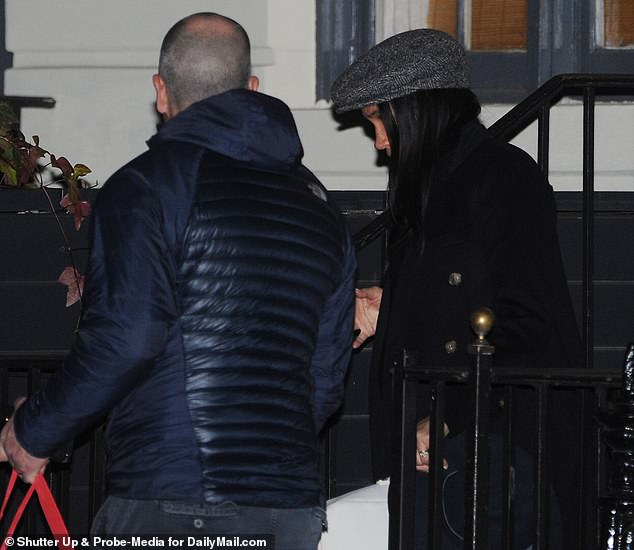 Incognito: Meghan was seen stepping out in New York City on Monday evening after flying into the city to attend a baby shower organized by her closest friends

A spokesperson for Kensington Palace would not divulge details of the Duchess’s flights, but confirmed that as this is a private trip, her travel was ‘privately funded.’

The palace also declined to comment on Meghan’s security detail for the duration of the trip, or the plainclothes officer seen accompanying her.

On Saturday Meghan joined her close friend and unofficial stylist Jessica Mulroney at Ladurée in SoHo on Saturday to enjoy macarons and tea in one of the location’s private spaces, according to Harper’s Bazaar.

Although Jessica is based in Canada, she arrived in New York late last week to film some style segments for Good Morning America, after being named the show’s newest fashion contributor in late 2018.

The decision to visit Ladurée may well have been Meghan’s, however, as the known foodie once took part in a photo shoot for Tod’s in the ornately decorated French restaurant.

In an image from the shoot, she is seen sitting in the New York tourist hotspot, wearing a patterned suit, a white shirt, and a pair of silver Tod’s loafers with fringing detail on the front.

The duchess also praised the restaurant in an interview with writer Barry Samaha.

‘I love Ladurée in SoHo,’ she said. ‘It’s like a little slice of Paris in the middle of New York City.

‘It is absolutely beautiful, and the courtyard is awesome,’ she added. ‘Everyone should get the Coupe SoHo, which is this amazing salted caramel ice cream. It’s delicious!’