Meghan Markle gets a lot of credit for transforming Prince Harry into the strapping, health-conscious father-to-be you see today, but it looks like the Duke of Sussex has been rubbing off on his wife, too. See, before his fairytale romance with Markle began, the Prince fell in love with boxing as a way of coping with built-up emotions he’d been harboring since the death of his mother, Princess Diana. Ever since, Harry has been an advocate for using physical exercise to strengthen one’s mental health, and by the looks of Meghan Markle and Prince Harry’s personalized boxing gloves from Empire Fighting Chance, a UK boxing club that uses fitness to help young people work through their own mental health struggles, the Duchess now has incentive to hop into the ring herself.

Prince Harry first opened up about his emotional ties to the combat sport in April of 2017 during the first episode of the podcast Mad World. It was the first candid interview the Duke had ever given about his experience with mental health, and he admitted that he’d shut down emotionally following the death of his mother. This type of emotional build-up, he explained on the podcast, led to breakdowns “on numerous occasions,” especially during those moments “when all sorts of grief and sort of lies and misconceptions and everything are coming to you from every angle.” In order to get a handle on his aggression, the Duke said he’d taken up boxing.

“Everyone was saying boxing is good for you and it’s a really good way of letting out aggression,” he said. “And that really saved me because I was on the verge of punching someone, so being able to punch someone who had pads was certainly easier.” 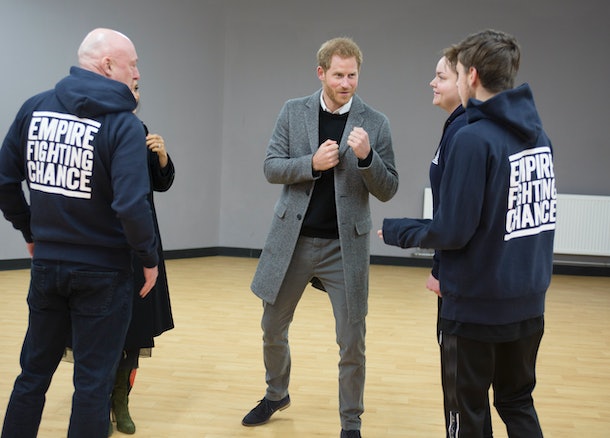 Per the Bristol Post, on Friday, Feb. 1, Prince Harry and Meghan Markle took a trip to Empire Fighting Chance, which, in a way, brought Harry’s experience with boxing and mental health full-circle. Empire Fighting Chance, an inner-city Bristol boxing club, is actively working with young adults to give them a “fighting chance to succeed,” per the organization’s mission statement, and during a tour of the gym, Harry had the chance to speak with some of its members.

"The thought of sitting down in a chair, one-to-one, with a therapist, can be a real deterrent. However, this is the sort of place that you don’t even realize you are being cured, but you are,” the Duke said during his visit to Empire Fighting Chance, per the Bristol Post. “What is being achieved here is so important, especially for our young people. It really is incredible to see."

To commemorate the occasion, and say thank you to the Duke and Duchess for their visit, the organization gifted both Harry and Markle each a pair of personalized Everest boxing gloves, Daily Mail royal correspondent, Rebecca English, reported on Twitter. Personally, I’ve never boxed myself, but if I were Markle, I’d definitely hop into the ring, if for no reason other than to show off the epic fitness accessory.

Cliché as the reference may be at this point, Elle Woods wasn’t wrong when she stated matter-of-factly that exercise gives you endorphins, and endorphins make you happy. Going off that statement alone, it wouldn’t exactly be wrong to assume that pretty much any form of exercise — any form that you enjoy, at least — can put you in a positive mindset after a hard day, but boxing, specifically, seems to be an especially gratifying, grounding workout.

The endorphins rush is definitely a perk, but according to Tanya Morgan, a top boxing coach at Sweat by BXR, boxing can also help you redirect your focus so that your full attention is only on the sport, not on whatever’s weighing you down. “To box well, you need to be able to switch off from the outside world and be 100% focused,” because it’s fast, furious, “and above all fun, leaving little room in your head for anything else,” Morgan told Harper’s Bazaar UK, adding that the sport is also an excellent stress-reliever, motivator (because oftentimes, you won’t be sparring with yourself, but rather a partner who will keep you accountable), and a way to learn more about yourself on an intimate level — both physically and mentally. 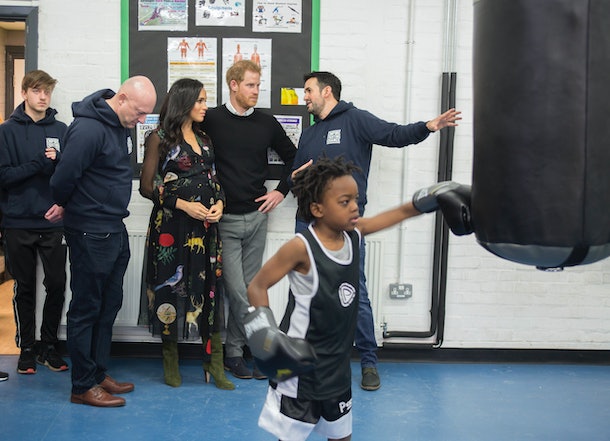 "You will start to realize and understand more about how your brain works and reacts as you develop your unique boxing style," Morgan told the outlet. Because the sport is rooted in good technique and precision, the coach explained, athletes need to hone their concentration, practice, and precision skills. Once you’ve gotten those down, according to Morgan, boxing becomes "a skill that can aid everything from your balance to your reflexes,” and one that can be applied to real-life scenarios.

So the next time you’re feeling particularly stressed, it might be worth checking out your local gym or fitness studio’s class options, and signing up for a boxing class. You might not score a pretty pair of gold-embossed sparring gloves like Markle, but your mental health might benefit the way Harry’s did, and I’d say that’s worth so much more than a flashy fitness accessory (but seriously, Everest, hook a girl up, please).