Sometime soon, probably next week, Melbourne artist Casey Jenkins will ovulate. Jenkins will send out a notification on social media, a vial of sperm will arrive on their doorstep and, within hours, an audience will watch online as they self-inseminate. In the name of art. 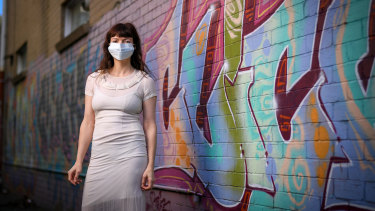 Artist Casey Jenkins will livestream a self-insemination every month.Credit:Eddie Jim

Jenkins' project Immaculate is supported by South Australia's Vitalstatistix and the Australia Council, and intended as a precursor for a work commissioned by Arts Centre Melbourne and the Fringe.

The 41 year-old accepts it will provoke discomfort, and probably criticism. Jenkins is no stranger to controversy – in 2013 a "vaginal knitting" performance piece made worldwide headlines, went viral on YouTube and sparked outrage (and abuse).

But Jenkins is not just making trouble – there's a point to be made here. The work is about disadvantages imposed on women in the art world, about prejudice against queer pregnancy and conception, about isolation and connection.

"I had a child a couple of years ago and since then I've become really aware of how there is no place for a person who has primary caring responsibility in the art world," Jenkins says. "It revolves around 6pm canapes and viewings, and you can't do that if you have to do bathtime."

The new performance piece, on the other hand, is dictated by "the erratic and hard to predict" rhythms of Jenkins' body. "One of the things I'm most excited about with this work is that everyone's schedules have been thrown out the window [by the pandemic lockdown], and it's more acceptable to say 'I'm going to be doing a performance when my body is ready and you can come to me', rather than trying to fit my body into these very patriarchal schedules.

"The rest of the world has come into the rhythm of my life now. As a solo parent I don't get out much. I am home alone a lot, or just with my child. People will resonate with it more, realise how a lot of people do live these solitary existences anyway."

Jenkins had planned to try to conceive anyway, but wanted to make it into art. A donor will "drop it at the gate for me" – Jenkins has a medical exemption and everything will comply with Stage 4 lockdown rules. On the livestream, Jenkins will talk to the camera about "some experiences I've had in trying to conceive", then move to the back of the room and insert the sperm with a needle-less syringe, then lie there for half an hour "and that's it", roughly once a month for four months (or until conception).

Jenkins acknowledges, even welcomes, the potential for backlash. "I want it to be as simple and uncontrived as possible – I feel it's quite banal – and I think when you find an action that is at once banal and shocking then you've happened on a point of hypocrisy in society.

"A woman, a person of my age who is solo, this is considered an aberration, that it's not natural. It's called artificial insemination – that it's not right, that it's somehow lesser, it's sad, it's not an ideal way of having a child – I should not have a child or I should have a man.

"These are very negative ideas that I sense society feels toward a person like me going through this process. There's no way of me existing that is acceptable – except not to show myself.

"I hope there will be conversations around this. If they feel uncomfortable, they will then say 'why?' What exactly, when there's not much there, will they hang that discomfort on?"

Immaculate is backed by arts organisation Vitalstatistix with Australia Council funding. Jenkins had initially hoped to present the piece through Take Over! – a program for new work by Arts Centre Melbourne and the Melbourne Fringe – but instead will create for them a performance that "results from the process and relates to me being pregnant or not".

Emma Webb, director of Vitalstatistix, said the body funded the piece through their Adhocracy lab because "Casey's work feels so pertinent right now… an incisive critique of the way reproduction is commonly viewed, and of access to reproductive services".

And, Webb added, as with many artists' usual income sources dried up it was a good time to support new work from "an important Australian artist".

An Arts Centre Melbourne spokeswoman said they decided not to present the Immaculate livestream after considering "whether we could fully support [Jenkins] to realise their vision… through a safety first lens for our team and the artists", and Jenkins' Take Over! project was yet to be fully explored and agreed.